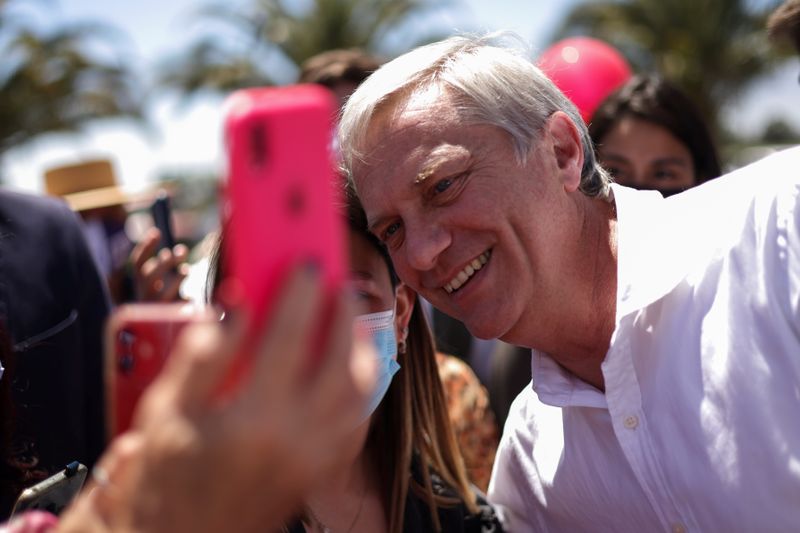 Chilean presidential candidate Jose Antonio Kast from far-right Republican Party meets with supporters during a campaign rally in the outskirts of Santiago, ahead of the first round of presidential elections on November 21, Chile, October 25, 2021. REUTERS/Ivan Alvarado

SANTIAGO (Reuters) – Chile’s right-wing presidential candidate, José Antonio Kast, is pulling ahead in pre-election opinion polls just weeks before the country’s November ballot, though is still seen losing a likely second-round run-off against a candidate from the left.

The presidential election, the first since widespread protests in 2019 rocked the Andean copper-producing country, will be held on Nov. 21. If no candidate gets an absolute majority, there will be a head-to-head vote in December between the top two competitors.

In a hypothetical second round between Kast and Boric, the leftist would gain 42.9% of the vote compared to 36.8% for Kast, who has surged in the polls in recent weeks. Critics compare Kast to Bolsonaro and former U.S. President Donald Trump.

The fortnightly Pulso Ciudadano survey was carried out using 2,027 online interviews from October 25-29, with a margin of error of plus or minus 2.2%.

The weekly Cadem survey released on Monday also showed Kast climbing in the polls, gaining 24% of voter preference compared to 19% of Boric, who has been falling in recent weeks. The poll surveyed 1,005 people with a margin of error of +/-3.1%.