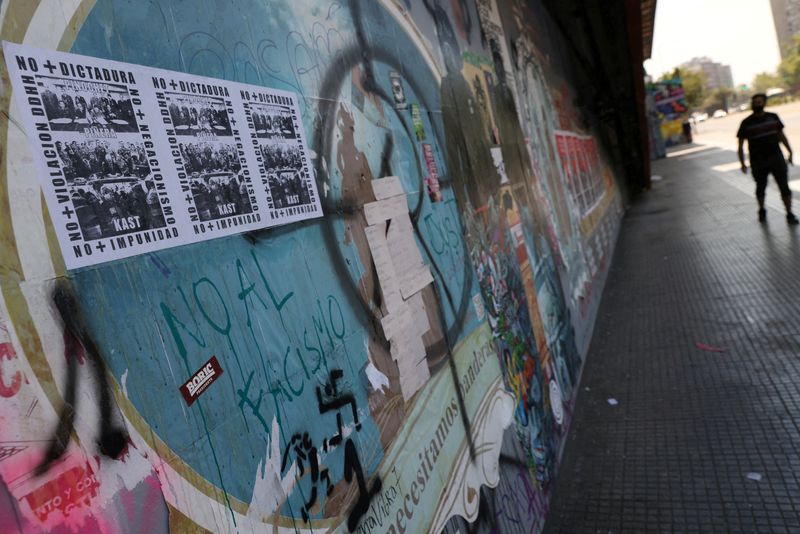 SANTIAGO (Reuters) – Chilean voters are split on what they want from the future ahead of a landmark presidential election on Sunday between polarized candidates – one offering social change and the other pledging to get tough on law and order.

The election will see ultra-conservative Jose Antonio Kast https://www.reuters.com/world/americas/chiles-kast-channels-pinochets-ghost-against-communist-left-2021-12-15 and leftist Gabriel Boric https://www.reuters.com/world/americas/student-leader-president-chiles-boric-eyes-historic-election-win-2021-12-15 go head-to-head after closing their campaigns this week, where they looked to win over middle-ground voters who could make the difference in a tight race.

“What is at stake now in Chile is democracy itself,” said housewife Julia Acevedo, 80, who attended 35-year-old Boric’s closing campaign in the capital. “The country needs change and he, who is young, can make a difference.”

Kast supporters, on the other hand, want stability. They say Boric – who has taken aim at Chile’s market-oriented economic model for stoking inequality – will undo decades of growth and stability and criticize his alliance with the Communist Party.

“I will keep supporting freedom,” said Margarita Noguera, waving a Chilean flag stamped with a picture of 55-year-old Kast. She said she had lived through the “leftist dictatorship” of democratically-elected socialist president Salvador Allende in the 1970s.

“I suffered a lot, like so many other Chileans.”

Angela Marambio, 53, said she had backed a center-right candidate in the first round in November, but was switching her vote to Kast for the run-off.

Kast, a lawyer and religious father of nine, has defended the economic legacy of dictator Augusto Pinochet, whose bloody military rule from 1973-1990 overthrew Allende in a coup and established the country’s economic model.

Huge protests erupted in 2019 against that model, which many see as the reason for issues ranging from meager private pensions to expensive healthcare and education.

“I do not believe he will be able to make all the changes that are needed, but he will accelerate the process,” said Morales, citing plans for spending on pensions and education.

“If I were to retire tomorrow I’d fall under the poverty line. I have two young children, education is expensive. If we want more solidarity in society, the state has to get involved.”

Boric, who made his name leading student demonstrations for better quality education, has sought to channel the energy and demand for change sparked by Chile’s 2019 protests.

Kast has done the opposite, with a tough law and order message that has appealed to a significant segment of the country weary of protests.

Enrique Zuleta, 41, a businessman from the coastal city of La Serena, said for years he voted for the center-left coalition that governed much of the post-dictatorship period and gave Chile a reputation for stability. Now he is backing Kast.

“I did not grow up in a right-wing environment at all, but today my vote is pragmatic, for the national good,” he said.

“Kast has many ideological issues with which I do not agree. But… he has said that he will respect the laws. And that is important to me.”

Boric supporters say he will defend issues such as women’s rights to abortion – allowed only in certain circumstances – and will respect sexual diversity, in focus after the country this month approved https://www.reuters.com/world/americas/love-is-love-chile-legalizes-same-sex-marriage-historic-vote-2021-12-07 same-sex marriage.

Kast has criticized both abortion and gay marriage.

“I am afraid of Kast,” said Andrea Ramirez, a 26-year-old public administrator. “He worries me about the environment, the role of the state, the pensions of Chileans. And what rights will women have?”