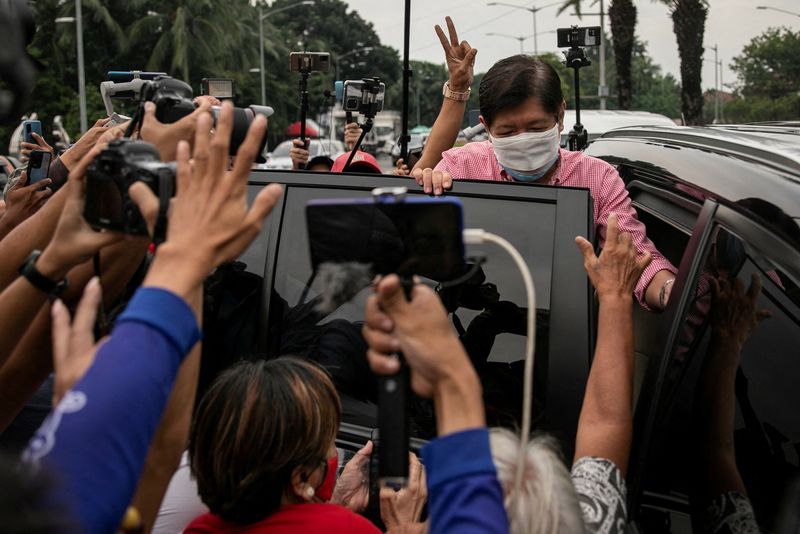 MANILA (Reuters) – Electoral authorities in the Philippines have rejected the first of a series of complaints seeking to disqualify presidential contender Ferdinand Marcos Jr, the early frontrunner ahead of next year’s election.

Marcos Jr https://www.reuters.com/world/asia-pacific/five-facts-about-philippines-ferdinand-marcos-jr-2021-10-06, the son of late Philippine dictator Ferdinand Marcos, still faces six other complaints – all of them linked to accusations that he failed to pay income tax or file tax returns, which carry a lifetime ban from running for election.

Marcos Jr, a career politician, has denied the tax allegations and said elections should be settled at the ballot box.

In a decision dated Dec. 16 that was made public on Saturday, the country’s elections commission rejected a petition filed by a fellow presidential aspirant that had sought to declare Marcos Jr, 64, “a nuisance candidate”.

A statement said the body had ruled that Marcos Jr’s candidacy did not make a mockery of the election process, and it rejected a suggestion that his candidacy would cause confusion among voters.

“(He) has sufficiently established that he actually has a bona fide intention to run for president,” the poll body added.

Marcos Jr’s camp welcomed the decision, saying there was no legal basis to cancel his certificate of candidacy or disqualify him from the 2022 vote.

The Marcos family is among the country’s most famous dynasties. Marcos Jr’s election as president would mark a stunning turnaround for the family, which fell from grace following a 1986 popular uprising.

Rights groups have voiced concern about his candidacy, fearing a repeat of the harsh 1970s martial law imposed during his father’s rule, when billions of dollars in state funds were plundered.