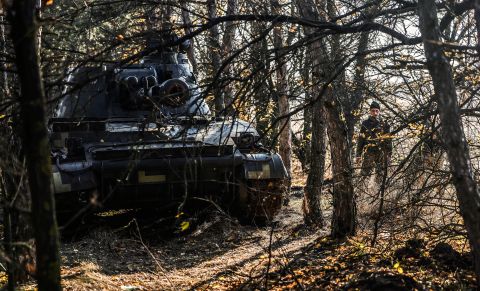 The battle for the southern city of Kherson is intensifying, as Ukrainian forces try to push through Russian defenses and occupying forces ramp up pressure on residents to abandon their homes.

Both sides have reported heavy fighting in the Beryslav district of the Russian-occupied city, where’s Kyiv’s forces are attempting to break through.

Kirill Stremousov, the Russian-backed deputy head of Kherson region military administration, said on Telegram that Ukrainians were “trying in every possible way, by reconnaissance battle, to break through in the Beryslav direction,” but that “all attempts are repulsed.” He added that about 70 were killed and several pieces of equipment were destroyed.

Ukrainian officials in the southern region said Russian forces had shelled several communities in the area. “The enemy continues to defend and tries to hold the occupied lines,” Ukraine’s Operational Command South said. It also claimed a Russian attack helicopter had been shot down in the Kherson region.

Much of the fighting is in open, flat countryside west of the river Dnipro.

Amid the clashes, civilians are still leaving Kherson. According to the Ukrainian side, people are being evicted from their homes and forced to cross to the east bank of the river Dnipro.

“Occupiers evict people en masse from their homes,” according to Vitaliy Kim, head of the Mykolaiv regional administration.

“The bottom line is that they settle their people only in houses where there are good conditions – water, gas, electricity. What does it look like? First, that they are going to be there for a long time. Second, they provide better conditions for their mobilized than they have at home,” Kim said on Telegram.

“The Russians, at the expense of the civilian population of the Kherson region, create living conditions for their mobilized, so that they like living there. They are going to create an almost militarized zone on the east bank of the Dnipro, sort of a buffer near Crimea.”

Some background: Russian forces have evacuated civilians from Kherson while fortifying their defenses in the region, a move some humanitarian bodies said constitutes human rights violations.