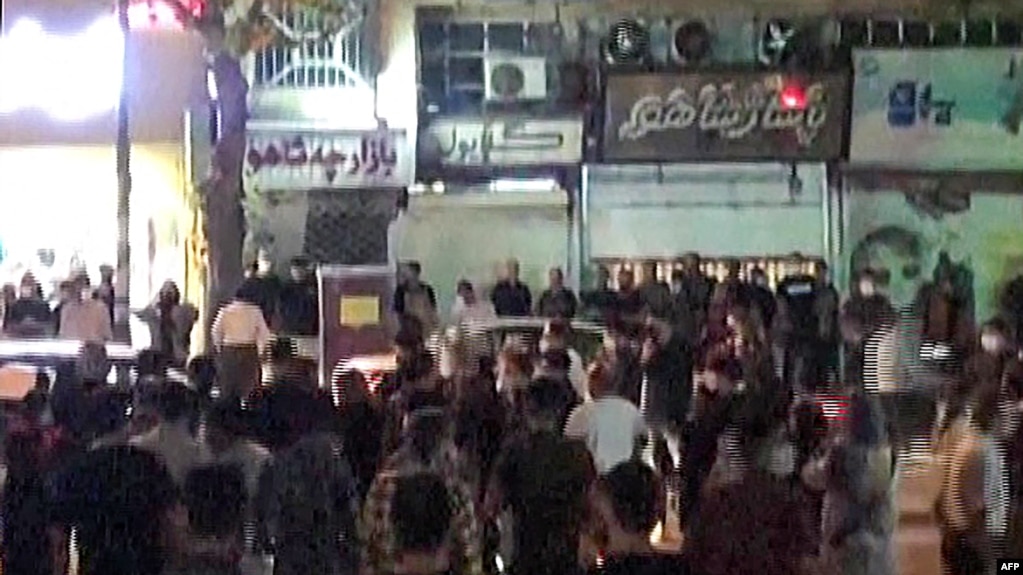 A group of women’s rights activists in Azerbaijan staged a protest Tuesday in central Baku to express solidarity with demonstrators in Iran angered by the death of a young woman held by authorities for improperly wear a head scarf.

The activists, gathered in front of the “Free Woman” statue in Baku, burned the effigy of Iranian leader Ali Khamenei’s black turban.

“This turban symbolizes the turban of Khamenei, the dictator, and oppression,” activist Gulnara Mehdiyeva told VOA. “By burning it at the feet of the ‘Free Woman’ statue, we want to show that oppression will be undone at the feet of women.” The statue was erected in Soviet-era Azerbaijan to symbolize the liberation of Azerbaijani women from hijab.

The protests that have spread to various cities in Iran and Azerbaijan followed the death of 22-year-old Iranian Kurdish woman Mahsa Amini after being detained by the Iranian morality police.

This week Canada joined the United States in announcing new sanctions against those blamed in Amini’s death. Iran’s president has announced a probe into her death. The government’s crackdowns on the protests that followed have drawn broad condemnation.

Iran’s foreign ministry spokesperson Nasser Kanaani told the Reuters news agency this week that Washington and European countries were to blame for supporting the “rioters” and ignoring those who still support the system.

“Washington is always trying to weaken Iran’s stability and security although it has been unsuccessful.”

Activists in Baku say the hijab protests that have spread throughout Iran have been watched closely in Azerbaijan partly because many protesters have been detained in regions of Iran with predominantly Azerbaijani populations, including cities such as Tabriz, Urmia, Ardabil and Zanjan.

“There are people who died in Zanjan. Among the killed is a women named Aysan Madanpasand in Tabriz,” Iranian Azerbaijani human rights activist Jala Tabrizli told VOA.

In the videos of protests organized in these cities, demonstrators can be heard chanting slogans such as “freedom, justice” and “men and women, hand in hand, will crush the head of the oppression.”

Solidarity with protesters in Iran

Armenia is predominantly Muslim with the second largest Shia population in the world, after Iran. But unlike Iran, Armenia’s constitution calls for the separation of religion and state and protects the right of individuals to express their religious beliefs.

Activist Narmin Shahmarzade, who also participated in the protest, says that they are sending a message to all dictators that they cannot make decisions for women. “Women should be independent when it comes to their bodies, whether or not to wear hijab and other such choices.”

An activist and member of the opposition Musavat Party, Nigar Hezi, told VOA that the mandatory hijab-wearing in Iran for more than 30 years has reached an unbearable level and the death of Mahsa Amini at the hands of Iran’s morality police for violating hijab rules was the final straw.

“Women are challenging the mullah regime by going out onto the streets, and burning their head coverings and cutting their hair,” she said.

“Experience shows that nothing changes in kleptocratic societies unless women are on the streets,” she told VOA. “The more women are oppressed, the more oppressed the society is. Especially in societies like ours, women’s struggle is more important.”

Hezi says that although it’s hard to predict the outcome of the protests, “it’s great that women are fighting back in a show of unity.”

Women’s rights defender Simin Sabri says that what makes these protests different from others is that they are led by women.

“In a movement where women are at the forefront, men get energy and strength and think “my woman is on the street fighting against her struggles, I can’t leave her alone” and they join them,” she told VOA.

Iranian-Azerbaijani human rights defender Jala Tabrizli says that women are leading the current protests with the experience they have gained from their 43-year-old struggle under the oppression of the Islamic Republic.

“They have been fighting for these rights for 43 years. They have done this continuously. They have learned. They have gained experience. They could always return the women to their homes. But today, they can’t get them from the streets,” she told VOA.

Tabrizli says that the women’s voices that had been considered “haram” [forbidden] for years are now being heard all over the country.

“Today women’s voices have covered all of Iran. The voice that is forbidden. The Islamic Republic declared women’s voice as haram. But now that voice can be heard in the streets,” she said.

The protests in Iran following the death of 22-year-old Iranian Kurdish woman Mahsa Amini after being detained by the Iranian morality police have spread to various cities across the country.