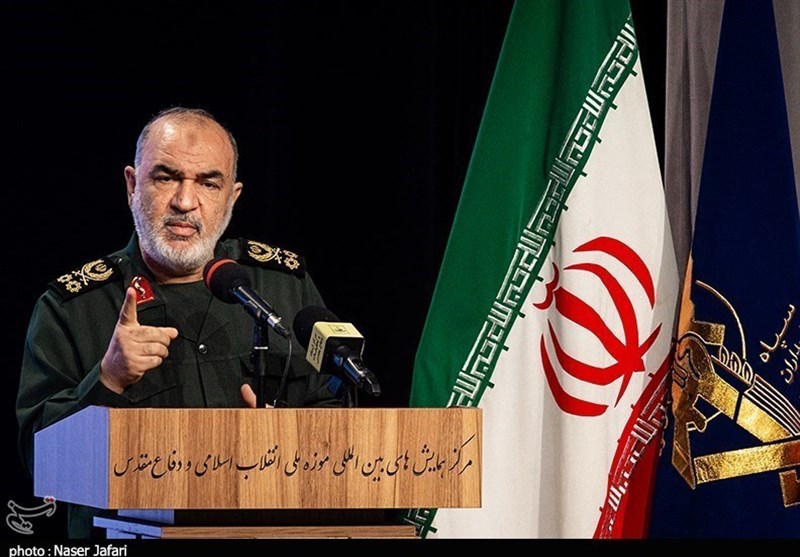 TEHRAN (Tasnim) – The enemies that are infuriated by and try to downplay the Islamic Republic’s achievements have resorted to evil plots to foment riots in Iran, the commander of the Islamic Revolution Guards Corps (IRGC) said, warning the adversaries of a revenge in the near future.

Addressing a conference in commemoration of martyred Iranian athletes, held in Tehran on Monday, Major General Hossein Salami said the enemies cannot tolerate the Islamic Republic’s achievements and its success in overcoming the sanctions.

He warned of the hostile scenarios against Iran, saying the evil activities of the media outlets have been masterminded by think tanks in Washington, New York and a number of European countries and involve their elements in Riyadh with the purpose of destroying Iran’s achievements.

The commander also advised the Iranian youth to protect the country’s glory, might, grandeur, political power in the international arena, regional clout, and strong security that have been gained with the blood of martyrs.

On the recent riots in Iran, the general said a small group of young people that have been deceived by the enemies will soon realize their mistake and the nature of foes as well.

Iran will soon take revenge on the enemies with the help of the very same young people, Major General Salami warned.

He cautioned young Iranians not to become the enemy’s pawns in the political battle, because the adversaries are “devils” that enjoy the killing of Iranian youth as they incite rioters to take to the streets, set fire, attack security forces and disrupt the country’s economy.

In remarks last week, Leader of the Islamic Revolution Ayatollah Seyed Ali Khamenei said the role of arrogant powers’ policies in the recent bitter events in Iran was obvious.

“And now for a few words about recent events. The first thing I would like to state is that in the events that have taken place over these last few days, the officers working in the country’s law enforcement, the Basij, and the Iranian nation have been wronged more than anyone else. They wronged us. Of course, the Iranian nation was present and very strong in this event too, as it has been in other events, and it will continue to do the same in the future too. In the future, whenever the enemies plan on creating unrest anywhere, it will be the courageous and faithful people of Iran who will stand up to them the most. They will be the ones who will have the most influence. They will come onto the scene as they have done before,” the Leader said.