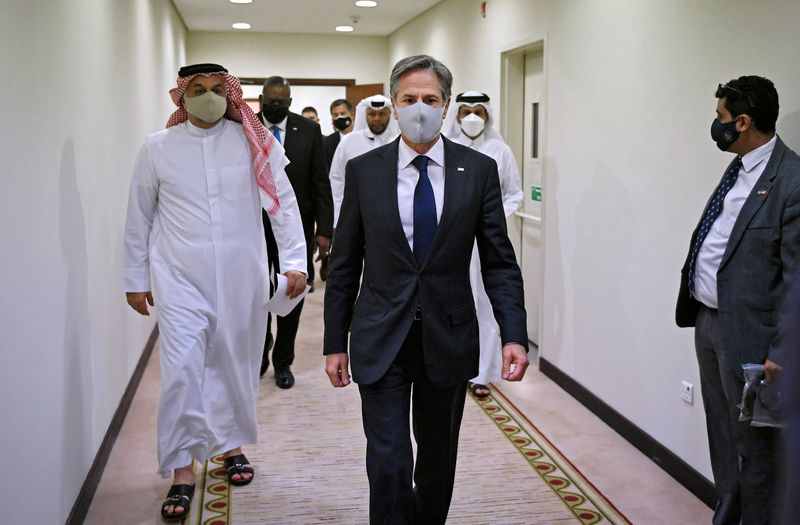 DUBAI (Reuters) – Since the U.S. withdrawal from Afghanistan, the world’s top diplomats have been beating a path to Qatar, long the gateway to the Taliban and now the essential go-between as the West tries to deal with the new Kabul government. This is no accident.

Analysts describe Qatar’s emergence as a broker in Afghanistan as a part of a carefully nurtured strategy by the tiny but rich state to bolster its own security, by becoming indispensable as a venue for international mediation.

The world’s biggest liquefied natural gas producer, the small desert peninsula country is one of the wealthiest nations per capita. It is home to barely 3 million people, 85 percent of them foreigners with guest worker visas. Yet it has long held outsized ambitions, hosting both the Middle East’s biggest U.S. air base and its most influential TV channel.

It squandered much of its regional clout over the past decade by overreaching in the wake of the 2011 Arab Spring revolts, when it backed pro-democracy movements and rebels across the region. Furious neighbours led by Saudi Arabia and the United Arab Emirates, with their ally Egypt, punished it with trade sanctions and diplomatic isolation.

Now, Qatar is back. Its dispute with the Arab powers was finally resolved this year, and next year it will host the soccer world cup. But few moves appear to have paid quite as large a diplomatic dividend as its role over Afghanistan, cultivated since it let the Taliban open the group’s main international office in 2013 and provided the venue for peace talks that led to last year’s U.S. agreement to withdraw.

That “patient diplomatic facilitation” was a classic means for a small state to elevate its international relevance, said Kristin Diwan, senior resident scholar at the Arab Gulf States Institute in Washington.

“Given its population size, substantial military projection is a tough proposition. But Qatar can bring real value through the relationships it maintains, especially across both Western and Islamic parties – and especially those the U.S. is loath to approach directly.”

In the weeks since the militants swept into power, more than 58,000 of the 124,000 Western citizens and at-risk Afghans who were airlifted out of Afghanistan flew through Qatar.

And now, as temporary home to the evacuated Afghanistan embassies of the United States and several European allies, it is serving as the main mediator for Western efforts to engage.

“As we carry forward, our diplomacy here, we know that Qatar will be our partner, because this is not the first time that Qatar has stepped up to help in Afghanistan,” said U.S. Secretary of State Antony Blinken, who visited this week with Defense Secretary Lloyd Austin.

A Qatari official said that as an impartial mediator, Qatar has engaged with all sides to provide freedom of movement for those in Afghanistan, and “fight terrorism to prevent any future instability in the region”.

Working with its close ally Turkey, it has helped the Taliban reopen Kabul airport, allowing humanitarian and domestic flights to resume.

During Afghanistan’s hasty evacuation, Qatari diplomats on the ground in Kabul helped escort fleeing Afghans through checkpoints to the airport.

As a small state surrounded by better-armed rivals that would no doubt covet its gas fields, Qatar has long felt the need to protect itself with ambitious diplomacy. Four years ago, it found itself in peril when Saudi Arabia, the UAE, Egypt and their allies, with the apparent tacit approval of the Trump administration, imposed trade bans and diplomatic isolation.

The neighbours accused Qatar of backing Sunni Muslim Islamist groups across the region while simultaneously growing too cosy with Shi’ite Iran. Some in the region wondered whether Saudi Arabia and its allies might even invade, although Riyadh denied harbouring any such plan.

Qatar, shielded from the economic impact by its $300 billion sovereign wealth fund, denied wronging its neighbours and held out until the dispute was resolved this January. But the feud underscored the need for it to cultivate powerful friends.

Being useful to the West can help, said James Dorsey, a senior fellow at Singapore’s S. Rajaratnam School of International Studies.