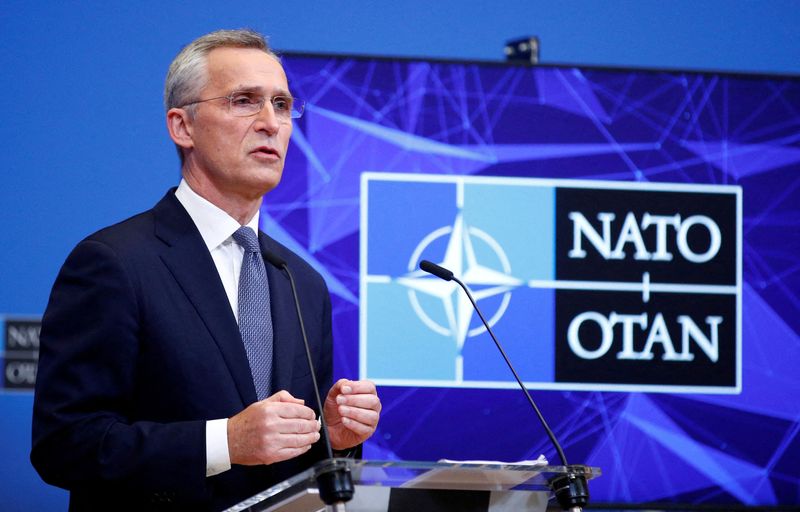 By Robin Emmott and Sabine Siebold

BRUSSELS (Reuters) – Russia’s troop buildup near Ukraine is galvanising NATO defences in Europe that President Vladimir Putin wants to dismantle, giving the alliance a sense of renewal after failures in Afghanistan.

Despite intense diplomacy https://www.reuters.com/world/blinken-arrives-berlin-ukraine-talks-with-european-allies-2022-01-20 with Russia, the United States and its NATO allies say they cannot consider demands that Moscow is making for security guarantees while it masses troops near its neighbour’s border and holds live-fire exercises in Belarus. https://www.reuters.com/world/europe/belarus-says-joint-drills-with-russia-run-feb-10-20-2022-01-18

Instead, Western officials, diplomats and former officials say NATO – created in 1949 to deter the Soviet threat – is obliged to consider reinforcements that go against Putin’s demand that the alliance must not expand further eastwards.

Neutral countries Finland and Sweden, which have deepened collaboration with the Western alliance, have restarted a debate about joining the North Atlantic Treaty Organisation.

French President Emmanuel Macron has offered to send troops to Romania, an offer welcomed by Romania’s president, and there is the prospect of more NATO troops being sent to the Black Sea region and the Baltics.

Although NATO is under no treaty obligation https://www.reuters.com/world/europe/best-supporting-actor-nato-secondary-role-if-russia-invades-ukraine-2022-01-18 to defend Ukraine, as the former Soviet republic is not a NATO member, the tensions with Russia have united member states around what one former alliance official called “a common sense of purpose”.

It is a turnaround for an alliance criticised internationally following the chaotic Western withdrawal from Afghanistan in August, which one German politician called NATO’s “biggest debacle” since its creation.

“One of the things that’s so striking to me about this is that … Russia’s actions have precipitated exactly what President Putin says he wants to prevent,” U.S. Secretary of State Antony Blinken told reporters this week before leaving for Ukraine, where he said support for NATO membership had grown.

That could entail more NATO troops, ships and planes in the Black Sea area and in the Baltics and shifting from a strategy of rotating troops to a permanent force presence there, including more U.S. soldiers and weapons.

“I think the U.S. moving additional capabilities to Europe now is definitely in the works, because the situation demands it,” said Lithuanian Defence Minister Arvydas Anusauskas.

Troop decisions could happen as early as a NATO summit in Madrid in June, diplomats and officials said, although any pull-back by Moscow would be likely to give pause.

Russia rejects U.S. accusations that it is preparing to invade Ukraine and says it is free to train its troops anywhere on its territory. Moscow accuses NATO of threatening the stability of Europe with its policy of offering membership to Ukraine and Georgia, which Russia considers its backyard.

The Kremlin demands that NATO retrench behind what were its boundaries before central and eastern European nations joined from 1997.

ONCE ‘OUT OF BUSINESS’, ‘BRAIN DEAD’

After the collapse of the Soviet Union in 1991, the alliance lacked a meaningful role, with one U.S. senator, Richard Lugar, quipping that NATO needed to look beyond collective defence and go “out of area or out of business”.

The U.S.-led invasion of Iraq in 2003 created bitter disputes between Washington, Berlin and Paris. As recently as July 2018, Donald Trump, then U.S. president, threatened to pull out of the alliance. NATO-member Turkey has pursued its own, often- conflicting, foreign policy in Syria and Libya. Macron once described NATO as “brain dead”.

Former NATO officials see a clear link between Russian aggression and allied unity in an often-fractious organisation of 30 member states with different perspectives and priorities.

Russia’s annexation of Crimea from Ukraine in 2014 set in motion NATO’s biggest modernisation since the Cold War. NATO sees itself duty-bound to defend itself in the Baltics through to the Black Sea – Russia has a base in Kaliningrad and has missiles in the Black Sea area that can cover huge areas.

European allies, Turkey and Canada have increased defence spending by $260 billion since 2014, according to allied data.

Ten NATO allies meet the goal of spending 2% of economic output on defence, up from just three in 2014. NATO has also stood up a new spearhead force of 5,000 troops.

“There’s no doubt about it: the Russians are uniting NATO around a common sense of purpose,” said Jamie Shea, a former senior NATO official now at the Friends of Europe think tank in Brussels. “Given the situation, NATO really has no choice.”

(Additional reporting by Simon Lewis in Washington and Andrius Sytas in Vilnius, Editing by John Chalmers and Timothy Heritage)