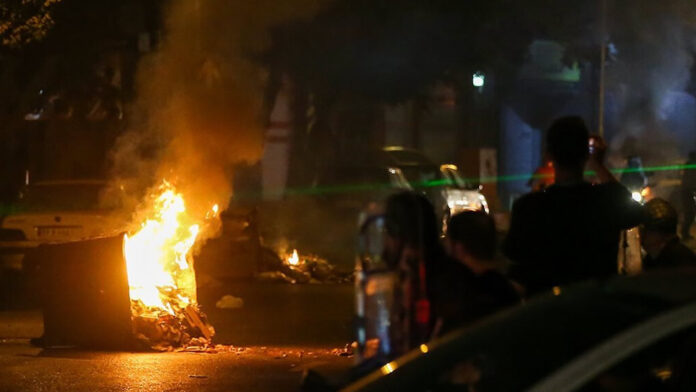 While ceremonies held in memory of those lost have been a tradition in Iran for as long as one can remember, the Iranian people have been using long-respected practices as gatherings to launch protests against the mullahs’ regime. Such events, known to be scenes of mourning, are witnessing brave Iranians chanting anti-regime slogans to voice their hatred about the mullahs, specifically targeting regime Supreme Leader Ali Khamenei, and renewing their pledge to overthrow the regime in its entirety.

Protests in Iran have to this day expanded to at least 280 cities. Over 750 people have been killed and more than 30,000 are arrested by the regime’s forces, according to sources of the Iranian opposition People’s Mojahedin Organization of Iran (PMOI/MEK). The names of 601 killed protesters have been published by the PMOI/MEK.

People in the city of Mashhad in northeast Iran took to the streets on Wednesday night and began chanting anti-regime slogans, including “Death to the dictator!” referring specifically to Khamenei. Similar protests were seen and reported from the Aryashahr, Saadatabad, and Ferdows districts of the capital of Tehran.

On Wednesday morning in the city of Bahmai of Kohgiluyeh & Boyer Ahmed Province in southwest Iran, local investors took to the streets demanding answers from the Puyesh investing company regarding their lost and/or stolen savings.

In a village near the city of Mahabad, locals gathered to mark the 40th day of Mehran Rahmani’s murder by the regime’s oppressive security forces. Rahmani was killed on November 18 when regime security forces opened fire on protesters in this city.

In Tehran, merchants and storeowners in the capital’s Aladdin district are closing shop and going on strike on Wednesday, protesting the extreme currency fluctuation on the country’s national currency, the rial, against the U.S. dollar.

In Sanandaj, the capital of Kurdistan Province, western Iran, locals are on strike and continuing the nationwide protests against the regime on the 104th day of the uprising, supporting their colleagues who’ve had their businesses shut down by authorities.

In other reports on Wednesday, locals in Saqqez, the hometown of Mahsa Amini, were reported to be continuing the nationwide protests against the regime on the 104th day of the uprising.

Workers of a local petrochemical site in Ilam, western Iran, went on strike today protesting the expulsion of one of their colleagues, Arash Tabarrok, that led to him committing suicide.

And in the city of Bandar Abbas, southern Iran, people are reporting a major shortage of diesel fuel in gas stations for many days now. This crisis is crippling the country’s fleet of trucks.

On Tuesday morning people in the city of Tabriz, northwest Iran, gathered to hold a ceremony marking the 40th day of the killing of Aylar Haghi, a medical student, by the mullahs’ regime during the recent protests. Participants began chanting anti-regime slogans, including “Khamenei is a murderer! His rule is illegitimate!” “Death to the dictator!” “We’re all together and we’ll fight to the end!” and “This is the year Seyed Ali (Khamenei) is overthrown!”

Authorities had dispatched a large number of security units to the scene to prevent any possible sign of anti-regime protests as the massive crowd was growing in numbers. At least three youths were arrested, according to local activists. Reports indicate Aylar’s father was also apprehended.

Also, in the city of Tabriz, a group of members of the Jamaran Housing Cooperative protested the cancellation of their general assembly and officials’ refusal to evaluate the credentials of a particular CEO candidate.

In the city of Mahabad, a large number of people gathered to hold a ceremony in memory of three protesters killed by the mullahs’ security forces. The mourners were seen chanting anti-regime slogans. There are also reports of protesters taking to the streets and establishing control with roadblocks.

A similar ceremony was held in the city of Bukan, northwest Iran, for another protester killed by the mullahs’ security forces. Participants in this ceremony began chanting: “Martyrs don’t die!”

Iranian opposition coalition NCRI President-elect Maryam Rajavi pressed on the fact that the Iranian people, despite all their sufferings in the past 104 days and 43 years, are determined to overthrow the mullahs’ dictatorship.

“Forty days after the murder of Aylar Haghi, the heroic people of Tabriz renewed their vows at her tomb, chanting ‘Khamenei is a murderer! His rule is illegitimate!’ The courageous youths of Iran will soon overthrow the religious fascism and establish democracy and people’s sovereignty,” the NCRI President-elect emphasized.