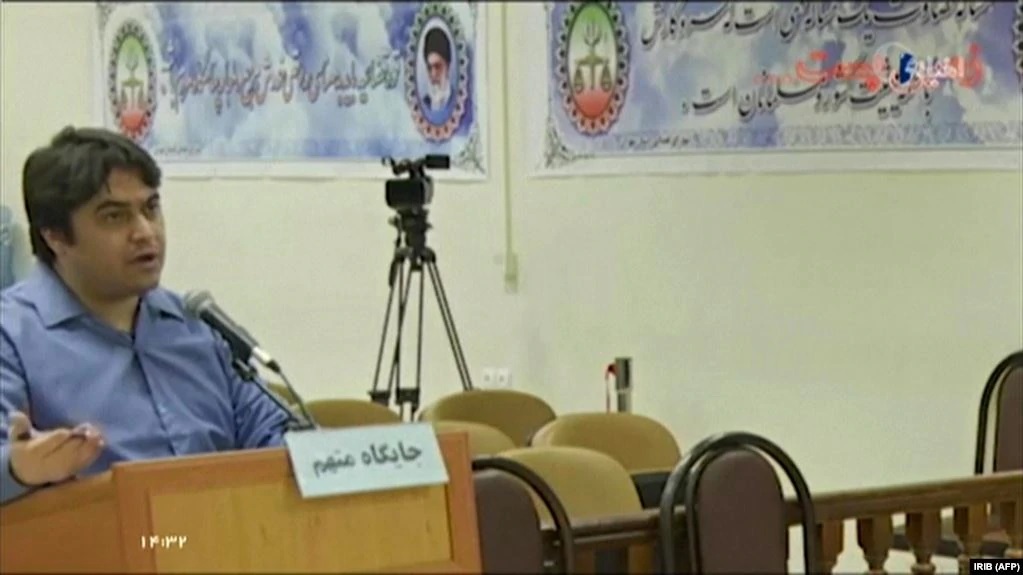 National Media Agency in MI, USA | IRAN — Ruhollah Zam, a former opposition figure who had lived in exile in France and was implicated in anti-government protests, speaks in a courtroom during a trial, November 30, 2020

In its report on the state of journalism in the world in 2020, Paris-based Reporters Sans Frontières (Reporters Without Borders) has appropriately ranked Iran as the global record-holder of killing media staff.

Referring to Ruhollah Zam’s kidnapping process that led to his trial behind closed doors, sentencing, and hanging, the internationally renowned organization has called his death not execution but a murder.

However, 42-year-old Zam was not the only journalist killed by Iran merely for his views and activities as a social media activist and reporter.

The so-called Islamist forces that came to power in Iran after the 1979 Islamic Revolution, brazenly or secretly, started issuing death sentences for journalists and authors long before dominating the ancient country. The Islamic extremists have never hesitated to condemn to death anybody they considered to have views against the “Islamic” train of thought, or as they maintain the “Holy Shari’a.”

Before the downfall of Iran’s pro-West king, Shah Mohammad Reza Pahlavi, these fundamentalist forces believed that journalists, writers, and artists, or anybody opposing their views were apostates, and it would be “fair” to punish them by death for insulting Islam and Muslims.

After consolidating power in Iran, they practically added the killing of their critics to the extensive list of the nascent Islamic Republic’s crimes. Eliminating whoever dared to raise voices against the “glorious Islamic Republic” became a part of the new rulers’ daily life in Iran.

By grabbing all national resources across the country, Iran has successfully implemented various methods to force journalists and writers to remain silent. The plans include brutal censorship, banning newspapers and magazines, detaining and forcing writers and journalists into exile or blatantly killing them in the streets, or executing them in prisons after show-off trials.

Leading Iranian linguist, nationalist, historian, and former Shi’ite cleric, Ahmad Kasravi, is the most famous writer assassinated before the establishment of Iran.

On March 11, 1946, members of a shadowy group, Fadā’iyān-e Islam (Devotees of Islam or Self-Sacrificers of Islam), led by a controversial mid-ranking black-turbaned clergy, Navvab Safavi, stabbed to death Ahmad Kasravi and one of his assistants, while being tried on charges of “insulting Islam.”

The founder of the Islamic Republic and a supporter of Navvab Safavi, Ruhollah Khomeini, had earlier called on an offshoot of Fadaiyan-e Islam, “Young Martyrs for Islam,” to confront Kasravi, referring to him as “this illiterate (man from Tabriz).”

Furthermore, years before Kasravi’s assassination, Ayatollah Khomeini had attacked the prominent linguist and historian in his first book, Kashf al-Asrar (Decoding Secrets). He blatantly stated that Kasravi and other writers like him deserve death. In the same book, he boldly theorized the necessity of closing newspapers, magazines, and books, setting them on fire, and hanging their authors as divine rulings in Shi’ite jurisprudence.

Therefore, it is no surprise that a government based on his teachings is now leading the way in killing writers and journalists around the world.

In the last forty years, nearly thirty people, whose main occupation was journalism or writing, have lost their lives in several ways, from being shot, hanged, murdered in prison, and assassinated at home or on the street.

Haleh Sahabi, a journalist and political activist, died after being physically attacked at her father’s funeral.

The administrator of a social media news channel with millions of followers, Paris-based Ruhollah Zam, was lured into Iraq, abducted, and taken back to Tehran, and executed.

A failed attempt to kill 21 Iranian journalists, writers, and poets on a bus destined for Armenia also must be added to the list of Iranian crimes against writers and people involved in media.

Iran is solely responsible for all these crimes. This process’s precedence and continuity clearly show that, regardless of which political camp has been in power in Iran, the Islamic Republic regime has always brutally dealt with journalists and writers who it considered unfavorable.

Some of these writers and journalists have been assassinated by the Iranian government when the judiciary and the country’s security services were simultaneously in the hands of the so-called reformist faction or the fundamentalists.

The saga of all those who have spent their best years of journalism or literary and artistic creation in forced silence, exile, prison, and grappling with censorship is another painful story needing a different feature.

The opinions expressed are those of the author and do not necessarily reflect the views of Radio Farda.