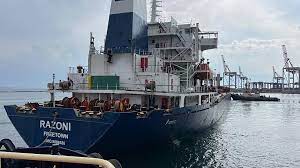 Nine “Grain from Ukraine” ships with a combined 336,000 tons of agricultural products have left Odesa ports in the past two days, the Ukrainian Ministry of Infrastructure reported Sunday.

The program is a humanitarian initiative, with Ukraine planning to send more than 60 ships of critically needed food products to Ethiopia, Sudan, South Sudan, Somalia, Congo, Kenya and Yemen.

“In the past two days, the ports of Greater Odesa sent 9 ships with 336,000 tons of agricultural products to the countries of Africa, Asia and Europe. Since the beginning of the implementation of the ‘grain initiative,’ the world has received 13 million tons of Ukrainian food,” the Infrastructure Ministry wrote in a Facebook statement.

CNN previously reported that the first vessel from the humanitarian program, carrying about 25,000 tons of Ukrainian wheat, arrived at the port of Doraleh in Djibouti Saturday, en route to Ethiopia.