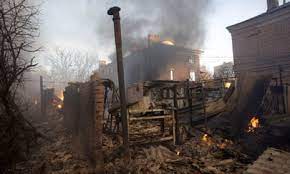 “Shelling by Ukrainian armed formations has been detected at 03:49 (a.m. local time) from the settlement of Tonenkoye toward the city of Donetsk (Voroshilovsky District), with 10 Grad rockets fired,” the mission said on Telegram, according to TASS.

Efforts to put out the fires have been complicated by water supply being turned off in the area, Russian media reported.

Information on injuries and casualties is being clarified and emergency responders are at the scene, according to Russian media.

The Ukrainian military has not yet confirmed or commented on the attack.

Donetsk, in eastern Ukraine, has been held by Russian-backed separatists since 2014.