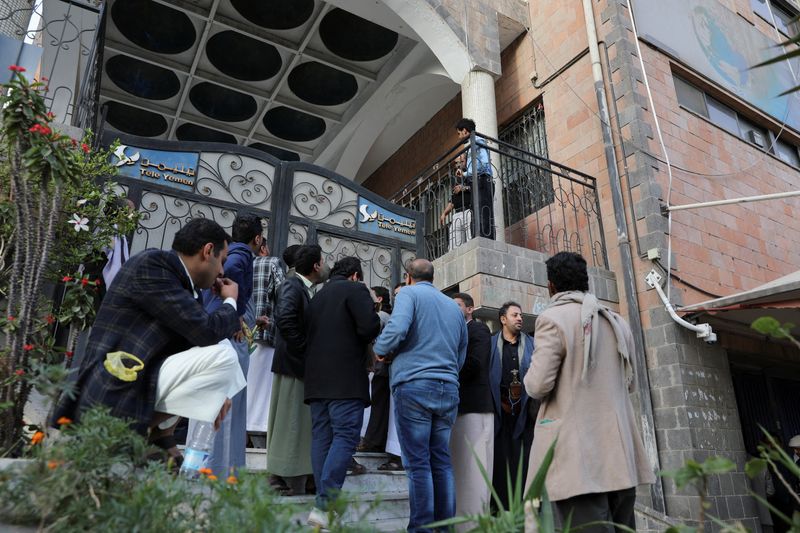 People wait outside TeleYemen company to get satellite internet connection amid an outage of internet service in Sanaa, Yemen January 23, 2022. REUTERS/Khaled Abdullah

SANAA (Reuters) – Most of Yemen faced a third day without internet on Sunday after air strikes on the Red Sea city of Hodeidah, the main landing point for the country’s undersea web connection, damaged its telecoms infrastructure.

In the capital Sanaa, Majid Abdullah said he was unable to receive money from relatives in Saudi Arabia at an exchange office as a result of the ongoing outage.

Seven years of conflict have divided Yemen between an internationally-recognised government based in the southern city of Aden, and the Iran-aligned Houthi group in Sanaa.

“I don’t know what to do. We eat and drink from the (money sent by) expatriates abroad,” he said.

The war in Yemen has killed tens of thousands of people and displaced millions, while economic collapse has pushed millions into poverty and parts of the country to the brink of famine.

The government’s communications ministry said on Sunday that it was ready to re-connect territory under its control via another undersea cable which lands in Aden, where parts of the city still have internet services. Some organisations have access to satellite internet.

Muammar Abdullah, a Yemeni living in Saudi Arabia, said he was not able to make daily checks on his family in Sanaa, which have become important after an increase in coalition air strikes, as a result of the internet being down and must instead make costly international calls.

And cut off from her internet chats with friends and family, university student Maha Muhammad in Sanaa has turned to the TV.

“We went back to watching television to follow the news. I used to rely on websites and social networking sites for the latest war developments,” she said.

It remains unclear when repairs in Hodeidah will be carried out, or what needs to be done.

“If safety is guaranteed, and we get guarantees that the strikes are not resumed, our engineers are ready to do the repairs,” Ali Nagi, CEO of the TeleYemen telecoms company Nosary, told Reuters from Sanaa.