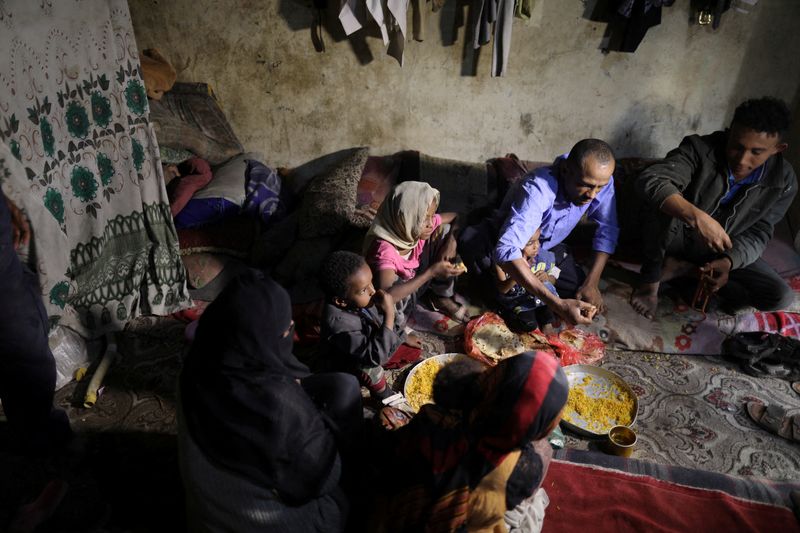 DUBAI (Reuters) – Ismail Hassan, a Yemeni father of ten, houses his family in an abandoned shop and scavenges recyclable items from rubbish bins to feed them.

Living in the capital Sanaa after fleeing his hometown four years ago, Hassan is one of millions of Yemenis battling with increasing poverty and hunger as peace eludes the seven-year conflict https://www.reuters.com/world/middle-east/yemens-houthis-say-12-dead-saudi-led-coalition-strike-al-masirah-tv-reports-2022-01-17 and cash-strapped aid organisations struggle to keep assistance flowing.

The World Food Programme (WFP) has since January reduced food rations https://www.reuters.com/world/middle-east/wfp-reduces-yemen-food-rations-due-funding-shortage-2021-12-22 for 8 million people due to funding shortages, warning the cuts would push more people into starvation.

Over a communal lunch of rice and bread in the small former shop, Hassan says he strives to put food in their mouths, but can give little else.

“The most important thing to me is providing them with food,” he said, adding that he cannot afford to put his seven school-aged children into education, even in government schools.

The family has been getting some food aid every two months, he said, but it is not enough.

“A sack and half of wheat, two cans of (cooking) oil, a bag of salt, a bag of sugar, and a bag of lentils. That’s it,” he said inside his sparse, crowded shelter.

Back in their old home in the Red Sea port city of Hodeidah, before war forced them to move, Hassan said they had food.

“We used to have meat, fish, chicken, molokhiya … There was everything. But now circumstances have imposed this on us.”

Yemen is divided between the Iran-aligned Houthi group in the north, which also controls Sanaa, and the internationally recognised government in the south.

Fighting, inflation, displacement and impediments to imports have plunged the already poor country deep into hunger. Around 5 million are at risk of famine, the WFP has said.