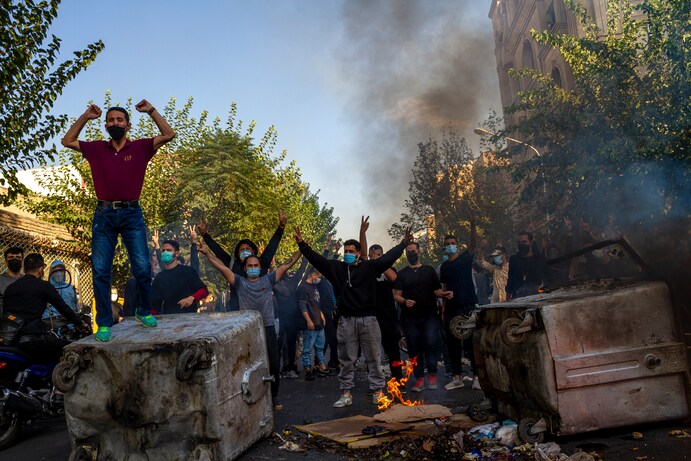 Labor unrest in Iran this month — including a three-day nationwide strike, among the largest the country has seen in decades — has hinted at the potential role labor could come to play in the uprising that has swept the country since September.

On Saturday, small groups of oil workers in Iran’s energy-rich south went on strike to demand better pay and working conditions, following similar, limited actions that have punctuated the protests. The ongoing movement, sparked by the alleged police killing of Mahsa Amini, a 22-year-old Kurdish woman, has been fueled in part by poverty and despair at economic deterioration under years of Western sanctions and state mismanagement.

Many demonstrators have embraced broad demands to oust Iran’s clerical leaders and dismantle their tools of repression. But massive labor disruptions on a level that could add exponential weight to the movement, such as those that helped oust the shah in 1979, remain difficult to envision, in part because the state retains near-total control of workers’ organizations at a time of deep poverty and labor fragmentation, activists and analysts say.

While the protests have shown remarkable staying power, surviving and even fanned further by an escalating crackdown, the movement is at somewhat of an impasse, neither cowed by violent suppression nor able to overthrow the status quo. More than 500 people have been killed and some 18,000 arrested, according to the HRANA activist news agency. Two people have been executed and more face the death penalty for convictions connected to the protests.

Some organized workers have already made the dangerous gamble to back the movement. But it would take millions of fed-up workers shutting down key sectors — oil fields, factory floors, public transit — to overwhelm the government’s “oppression machine,” said Foad Keykhosravi, of the Independent Iranian Workers Union. The union is a group that formed in 2006 to represent fired and unemployed workers, and then expanded to include people in industrial and service jobs, in defiance of Iran’s ban on independent unions.

Despite dogged efforts, the “regime’s extreme oppression” has hindered decades of efforts “to act in a more unified way,” he said.

Left with state-sanctioned labor groups, workers have struggled to fight declining wages, delayed payments, precarious contacts, unsafe conditions and eroding pensions in an economy dominated by elites with ties to the ruling clerics and Islamic Revolutionary Guard Corps, said labor historian Peyman Jafari. With the economy in free-fall, millions of Iranians are scraping by in fear of losing whatever jobs they can get.

When workers do strike — as they have at growing frequency — actions have centered on economic and not political demands, which still appear too “costly” for workers, Jafari said.

This dynamic, Keykhosravi said, the protest movement is trying to change.

The chance of workers acting en masse to throw their weight behind the protests, while still a distant prospect, appears to grow day by day. In a display of mass civil disobedience from Dec. 5 to 7, storefronts were boarded-up, offices emptied out and bazaars grew eerily quiet across some 50 cities. Leading the charge were Iran’s Kurdish regions and a few independent unions such as the Coordinating Council of Iranian Teachers’ Trade Association, which has many female members.

Workers across sectors joined in. A chicken farmer in Sari, northern Iran, who spoke on the condition of anonymity out of concern for his safety, said he shut down production and avoided financial transactions with state institutions on those days, withholding “money [that] will later turn into bullets and kill myself or my children.”

A university professor in Karaj, who also spoke on the condition of anonymity, joined in coinciding street protests. She said she had gone on strike days after Amini’s murder. Under pressure by the school not to participate, she quit. “At least I am not connected to any corrupted system,” she said.

The December strikes were “important steps forward,” Jafari said, “but the picture is still really uneven.” The actions included only a small segment of workers, he said, and received no buy-in from state-sanctioned labor associations or in key industries, such as oil and transportation, needed to disrupt the economy.

Recent strikes “in the industrial sector are basically the continuum of strikes around socio-economic demands” in past years, he said.

In the 1990s, Tehran began prioritizing privatization and other policies that eroded labor conditions and wages by increasing reliance on contract gigs, Jafari said.

Fed up, in 2004, bus drivers serving Tehran and its suburbs organized the Islamic Republic’s first independent union, Jafari said. A sugar-cane plant, teachers, a steel plant in Isfahan and contract oil workers, among others, followed.

But repression continued to keep these unions in check. Authorities violently suppressed strikes and arrested key labor activists and heads of independent unions. Authorities imprisoned Esmail Abdi, the general secretary of the independent teachers union, in 2015. He went on a 15-day hunger strike in May to protest his imprisonment.

“Organized civil society is trying really hard to support the protests, but they have not been able to take a leading role because of the repression,” said Tara Sepehri Far of New York-based Human Rights Watch. “Authorities have long invested in controlling organized labor activism.”

In the background, “the growing precarity” and “fragmentation” of workers in low-paying jobs and contracts continue unabated, said Zep Kalb, a doctoral candidate at UCLA specializing in Iranian labor relations.

In Iran’s highly prized, and securitized, oil sector, about two-thirds of workers are contractors and have no central way to organize and ensure job security, said Kalb, citing government statistics.

Women, at the uprising’s forefront, officially make up 18 percent of Iran’s labor market but are highly represented in informal jobs, such as home businesses, without means of unionizing, Jafari said.

Iran is also among the world’s most designated countries under Western sanctions, and years of U.S. economic measures have “paradoxically really undermined the power of workers to organize and go and strike,” he said, by strengthening the ruling elite’s grip on the increasingly isolated economy.

The challenges remain immense, Keykhosravi said, and the expectations high, as “worker strikes weigh a lot for Iranian society.”

“The movement needs time and that might also be the case for workers,” Kalb said. “Large amounts of people have to take to the streets before workers will join.”