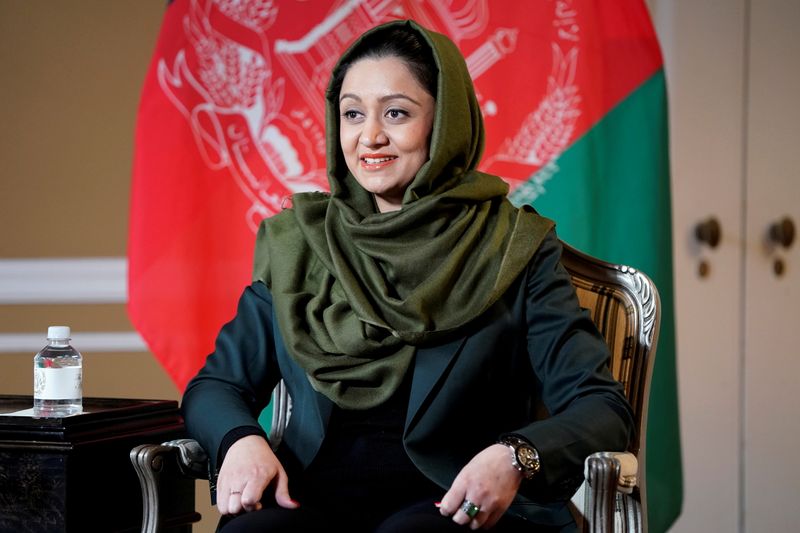 WASHINGTON (Reuters) – Roya Rahmani, Afghanistan’s first female ambassador to the United States who left her post in July, is clearly horrified by the Taliban takeover of her country. But she is not surprised.

In an interview, Rahmani accused the former U.S.-backed government in Kabul of a failure to lead the country and of widespread corruption that ultimately paved the way for the Taliban’s victory last month.

She also warned the United States, still smarting from its defeat, that the rise of the Taliban would have far-reaching geopolitical consequences.

“I, as an Afghan, was not surprised by the fact that the Taliban took over Afghanistan the way they did and how quickly they did, partly because of the lack of leadership by the Afghan government that was in place at the time,” Rahmani said.

President Joe Biden acknowledged he and other officials were aware of the risk that the Afghan government could collapse following the U.S. military withdrawal.

But they say they were caught off-guard by the speed of the Taliban victory, a miscalculation that helped lead to a chaotic U.S. military airlift of U.S. citizens and vulnerable Afghans. Thirteen U.S. troops and scores of Afghans were killed in a suicide bombing during the operation.

Biden, in a speech last month, accused Afghan troops of lacking “the will to fight” for their country’s future.

“It was not the Afghan forces, that they were not willing to fight for their freedom and for protection of their people. It was the leadership that was corrupt. And they handed over, basically, the country to the Taliban,” she said, without providing specific allegations.

In particular, Ashraf Ghani’s decision to abandon the presidency and leave Afghanistan on Aug. 15 was “extremely disappointing and embarrassing,” she said.

Ghani said on Wednesday he left because he wanted to avoid bloodshed. He denied allegations he stole millions of dollars on his way out.

“Leaving Kabul was the most difficult decision of my life,” Ghani said.

Rahmani, who is 43, left the job as ambassador to the United States after nearly three years in the role. During her posting she wrestled with what she believed was a politically-motivated case over an embassy construction project.

She denied any wrongdoing and an anti-corruption court found flaws in the case, sending it back even before the Afghan government crumbled.

“I invite any investigative body to look at all the documents,” she said.

But Rahmani’s accusations of broad corruption and mismanagement in Kabul carry echoes of warnings by current and former U.S. officials for years. Experts say corruption was steadily eroding ordinary Afghans’ faith in the U.S.-backed government and even turning some of them to the Taliban.

Rahmani described being cut out of discussions between Washington and Kabul, including during the Trump administration. Neither capital appeared to be fully preparing for consequences of the U.S. withdrawal, she said.

She warned of geopolitical shifts that will impact the United States and its allies.

Pakistan – a prickly U.S. ally that is close to the Taliban – will have gained leverage in its dealings with the Washington, she said.

“I believe that the United States will be facing a new Pakistan,” she said, while cautioning the Taliban’s takeover will have ripple effects on India, China, Turkey and beyond.

The last time the Taliban ruled Afghanistan, girls could not attend school and women were banned from work and education. Religious police would flog anyone breaking the rules and public executions were carried out.

The Taliban have urged Afghans to be patient and vowed to be more tolerant this time.

But Rahmani says the Taliban’s decision to exclude women from all of the top government positions announced on Tuesday was proof that dark times may be ahead for women.

On Tuesday, a group of Afghan women in a Kabul street had to take cover after Taliban gunmen fired into the air to disperse hundreds of protesters.

“I salute all the brave women of Afghanistan. It is quite risky to do what they are doing,” Rahmani said. “And it’s also an indication to the rest of the world that they have everything to lose at this point.”