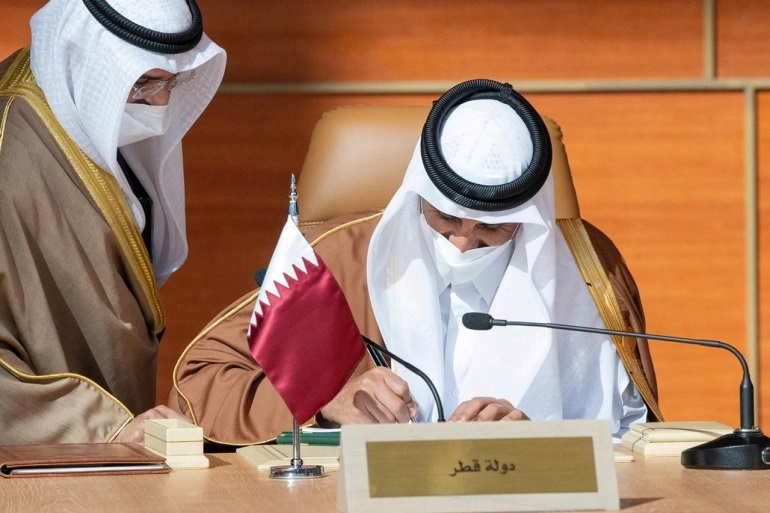 Iran is watching closely as Arab nations that blockaded Qatar for more than three years lift the boycott.

Soon after, their two countries, in addition to the United Arab Emirates, Bahrain, Oman and Kuwait – who together form the GCC – signed a “solidarity and stability” deal at their annual summit.

With Egypt also signing a reconciliation agreement with Qatar, a blockade on the peninsular Arab state lasting three and a half years has ended.

Iran was watching closely. The blockade, after all, was partly imposed because Qatar and Iran were developing closer ties.

The lengthy initial list of demands to lift the blockade – that were never granted – included provisions that said Qatar must shut down diplomatic posts in Iran, expel members of Iran’s Islamic Revolutionary Guard Corps, and only conduct trade and commerce with Iran in compliance with United States sanctions.

The GCC itself, established in 1981 shortly after Iran’s 1979 revolution, was partly founded to counter Iranian influence and that of since-deposed Saddam Hussein’s Iraq.

While GCC leaders tried to reduce frictions at their January 5 summit, deeper rifts within the organisation are more difficult to mend.

“The mere fact that this blockade was imposed brought to light the myriad of intra-GCC conflicts and proved that the GCC was never a union of six states, and it will never be one,” said regional affairs analyst Mehran Haghirian.

“The GCC, if it survives, will not and cannot be more than a regional deliberative organisation without any meaningful authority,” he told Al Jazeera.

Iran and Qatar
Iran’s relations with Qatar were growing before the blockade, but the two countries became significantly closer as other Arab states shunned Qatar.

One year ago, days after Iran accidentally shot down a Ukrainian Airlines flight killing all 176 aboard amid tensions with the US, Qatar’s Emir Sheikh Tamim bin Hamad Al Thani travelled to Tehran and stood next to Iranian President Hassan Rouhani in a show of unity.

One year ago, days after Iran accidentally shot down a Ukrainian Airlines flight killing all 176 aboard amid tensions with the US, Qatar’s Emir Sheikh Tamim bin Hamad Al Thani travelled to Tehran and stood next to Iranian President Hassan Rouhani in a show of unity.

In late March, when Iran had already become the country hardest hit by the COVID-19 pandemic in the Middle East, Qatar Airways facilitated aid to Iran from the United Nations Children’s Fund free of charge.

“It can be expected that bilateral relations between Iran and Qatar will continue to grow on the current pace even after the lifting of the blockade,” Haghirian said.

Qatar has also tried to act as a mediator between Iran and the US, a role that was played by Oman a decade ago.

Most recently, Qatari Foreign Minister Mohammed bin Abdulrahman bin Jassim Al Thani relayed messages between Iran and the US in late December as the first anniversary of top Iranian general Qassem Soleimani’s assassination by the US loomed.

The region continues to deal with the fallout from Donald Trump’s decision in May 2018 to unilaterally abandon Iran’s 2015 nuclear deal with world powers and impose harsh sanctions on Tehran.

Iran’s nuclear deal and its regional proxies and missiles programme have been long-standing issues that have fuelled old rivalries with other GCC members, mainly Saudi Arabia and the UAE.

GCC states are used to capitalising on Iran’s tensions with the US and will therefore oppose any developments that would reduce tensions, according to Mehran Kamrava, head of the Iranian Studies Unit at the Arab Center for Research and Policy Studies.

“Along the same lines, none of the GCC actors, even those that are ostensibly friendly with Iran, are happy about the JCPOA [Joint Comprehensive Plan of Action] and would like to see fundamental changes to it,” he told Al Jazeera using the formal name of the nuclear accord.

The landmark accord, signed with the P5+1 – the US, France, the United Kingdom, China, Russia, and Germany – prioritised curbing Iran’s nuclear programme over its growing influence in the region and its locally made missiles.

Iran says its regional presence is by invitation and a main pillar of its strategy of deterrence in tandem with its missiles in a region where most states have welcomed US military presence.

US president-elect Joe Biden will enter the White House on January 20 on promises of restoring the nuclear deal, but also with signals that he wants Iran to negotiate on its regional influence and missiles – something Iran adamantly rejects.

“Iran has long believed that the real power player in the region is the US, and that the GCC is not an independent actor on its own,” Kamrava said.

“Ultimately, the reason behind the nature of Iran’s regional actions and initiatives is to change US behaviour.”

Iran’s rivals within the organisation, however, wish to play a role in shaping the country’s future.

The Gulf states recently asked to be party to any future negotiations toward a new nuclear deal with Iran.

Iran, for its part, has proposed the Hormuz Peace Endeavour or HOPE, to initiate inclusive, region-wide dialogue and has called on Arab states to refrain from “buying security” from the US.

The initiative, which envisions cooperation on energy security and arms control among other things, has failed to get off the ground so far as Iran and its regional rivals continue to clash on key issues.

“The only path forward is to compartmentalise these issues and allow for the complete reinstatement of the JCPOA and, in tandem, prepare the required platform for re-establishing an inclusive regional dialogue,” said Haghirian.

“It can be argued that any resolution to the GCC crisis could pave the way for an inclusive dialogue between Iran and the GCC.”