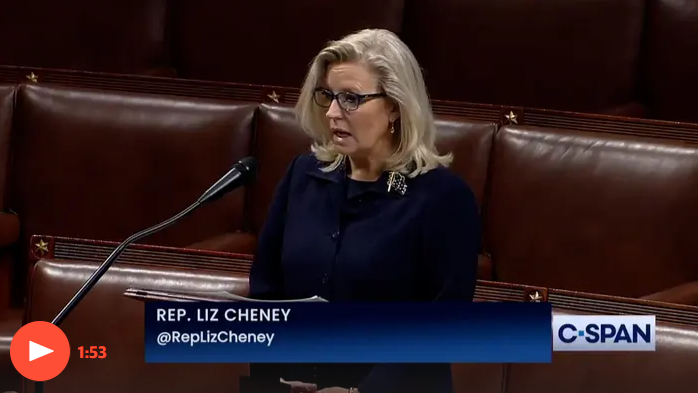 On the eve of a vote almost certain to remove her from a leadership role in the Republican party, a defiant Liz Cheney embraced her fall from party grace and offered a final appeal to her colleagues: “We must speak the truth.”

Republicans are poised to remove Cheney from her House leadership position over her refusal to support Donald Trump’s “big lie” that last year’s election was stolen from him. Cheney, a Wyoming representative who hails from a Republican political dynasty, was one of 10 Republicans who voted to impeach Trump for “incitement of insurrection” following the deadly 6 January attack on the Capitol.

In the weeks since, her assertions that the 2020 elections were valid, and that Trump was wrong to sir up supporters who rioted in his name, have driven a wedge between her and fellow Republicans who remain loyal to the former president.

In a speech on the House floor on Tuesday evening, Cheney was steadfast. “I will not sit back and watch in silence while others lead our party down a path that abandons the rule of law and joins the president’s crusade to undermine our democracy,” she said.

Wearing a pin replicating George Washington’s battle flag, Cheney justified her positions by referencing her time at the US state department, comparing the Capitol attack to events she’s seen in authoritarian countries.

A staunch, lifelong conservative and the daughter of the former vice-president Dick Cheney, she is almost certain to be replaced on Wednesday as the No 3 House Republican by Elise Stefanik, a New York representative who holds more moderate views on most matters, bar the validity of the last elections.

Critics have said that Cheney’s appeals for a fair democracy sound hypocritical, considering that she voted against the For the People Act to protect voting rights, and against enfranchising Washington, DC residents.

Cheney’s fate is a sign of Trump’s enduring grip on the Republican party. Her ouster comes as Arizona Republicans carry through a sham audit of the votes in Maricopa county, Arizona, employing a firm called Cyber Ninjas to investigate conspiracy theories including the false claim that ballots with traces of bamboo were smuggled in from Asia.

As part of her swan song on the House floor, Cheney referred to Trump as a “threat” and reiterated: “The election is over. That is the rule of law.”