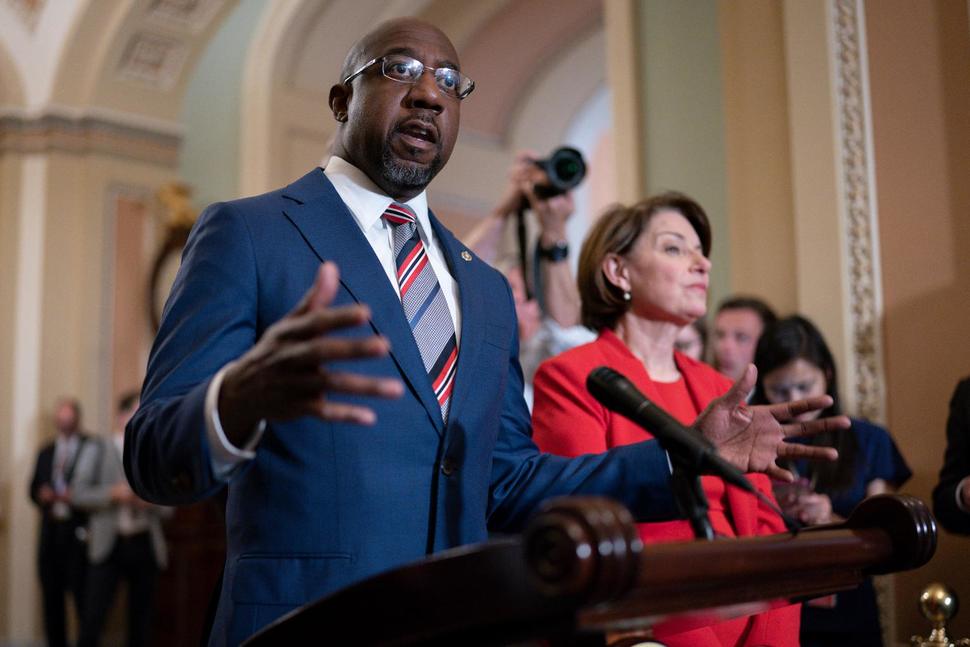 Back home, Georgia’s first Black senator is more subtle, pitching a “comprehensive view of infrastructure” and avoiding talk of his reelection fight already looming just months after he won a January special election runoff with Senate control at stake.

“I’m busy being Georgia’s United States senator,” Warnock said, smiling, as he brushed aside a question recently about famed football hero Herschel Walker potentially running for his seat as a Republican.

Indeed, the preacher-turned-politician spent the Independence Day recess hopscotching from an inland port in the conservative Appalachian foothills to liberal Atlanta’s urban microbreweries and sprawling public hospital, then the suburban defense contractors in between. At each stop, he highlighted the federal money he’s routed — or is trying to route — to his state for health care, national security research, rural broadband and urban walking paths, among other projects.

“We as Georgians should be proud of all that happens in the state,” Warnock said at the Georgia Tech Research Institute, cheerleading ongoing projects and arguing for more federal spending. “I had some sense of it before becoming a senator. But what I have been able to see firsthand is impressive.”

The high-wire act will test whether Warnock, who will seek his first full Senate term next year, can again stitch together a diverse, philosophically splintered coalition that tilted Georgia to Democrats in 2020. He’s still the high-profile freshman whose election gave Democrats unified control in Washington, but now he’s angling to be seen as a “senator for all Georgians” delivering for the state with nuts-and-bolts legislative work.

Warnock’s gambling that he can be an unapologetic advocate for Democrats’ agenda, including on voting laws, yet still prove to Georgians beyond the left’s base that he is a net-benefit for them. Come November 2022, that would mean maintaining enthusiasm among the diverse Democratic base in metro areas and Black voters in rural and small-town pockets, while again attracting enough suburban white voters, especially women, who’ve drifted away from Republicans in the Trump era.

The senator doesn’t disclose such bald-faced election strategy. His office declined a one-on-one interview for Warnock to discuss his tenure and his argument for a full six-year term. Still, his public maneuvering illuminates a preferred reelection path.

“Georgia is such an asset to our national security infrastructure,” Warnock said at the Georgia Tech outpost adjacent to Dobbins Air Reserve Base. He praised public and private sector researchers who develop technology for the Pentagon, U.S. intelligence and other agencies, saying they “keep our national defense strong and protect our service members.”

He held up the installation as a beneficiary of the U.S. Innovation and Competition Act, a $250 billion package that cleared the Senate on a rare bipartisan vote, 68-32, eight more than the 60-vote filibuster threshold that’s held up Democrats’ plans on election law and infrastructure.

In Atlanta, where Warnock resides and still serves as senior pastor of Ebenezer Baptist Church, which Martin Luther King Jr. once led, the senator lined up more squarely with Democrats’ priorities. Yet even then, Warnock was deliberate when discussing Republicans.

“It’s ridiculous that we haven’t expanded Medicaid,” he declared outside Grady Memorial Hospital, a vast public complex in downtown Atlanta. He noted that Georgia, still run by Republicans at the state level, remains one of a dozen states not to expand eligibility under Congress’ 2010 health insurance overhaul.

The senator later stood along the Atlanta Beltline, an old railroad path redeveloped into a pedestrian and cycling thoroughfare around the city’s perimeter. He touted a $5 million federal investment, billing it as an example of Democrats’ wide interpretation of infrastructure, and alluding to the GOP’s narrower “hard infrastructure” definition.

He endorsed a pending bipartisan infrastructure deal negotiated at the Biden White House but said Democrats should use Senate rules to pass an even larger package over Republican objections in the 50-50 chamber.

Yet in all those arguments, Warnock tried to frame his case as something beyond party.

“I’m making a jobs-and-economic viability argument,” he said on Medicaid expansion. “Once you have basic health care, you can pursue employment, and with a kind of freedom that you can work knowing that you’re covered.” He added that “rural hospitals are closing” under the financial strain of treating the uninsured and underinsured.

Warnock extended that analysis to rural broadband and the urban Beltline. Both, he said, connect individuals to economic opportunities around them. Housing and child care, he argued, are “basic infrastructure” for the same reasons.

As for voting rights, Warnock stood beside his co-sponsorship of Democrats’ sweeping overhaul that Republicans have blocked. But he also opened the door to a Senate compromise, provided it shores up the Voting Rights Act of 1965 and sets a national “baseline” for absentee and early voting. Rather than harp only on current GOP opposition, however, he noted that in 2006, the last time the Senate voted to extend the Voting Rights Act, the chamber did so by a 98-0 vote. That, Warnock insisted, means Democrats’ push shouldn’t be viewed as merely partisan.

For Republicans, Warnock remains among the top Democratic targets in 2022. Senate GOP campaign aides in Washington maintain that his voting record is out of step with most Georgia voters, especially in a midterm year, which historically means a whiter, more conservative electorate than in presidential years.

Still, many GOP heavyweights in Georgia offer begrudging compliments for how Warnock is managing battleground politics.

“I don’t think Warnock or Ossoff have done or said anything stupid,” said former U.S. Rep. Jack Kingston, comparing the pair favorably to House progressives like Rep. Alexandria Ocasio-Cortez of New York. “It’s not like they’ve gone out and become ‘The Squad’ or something.”