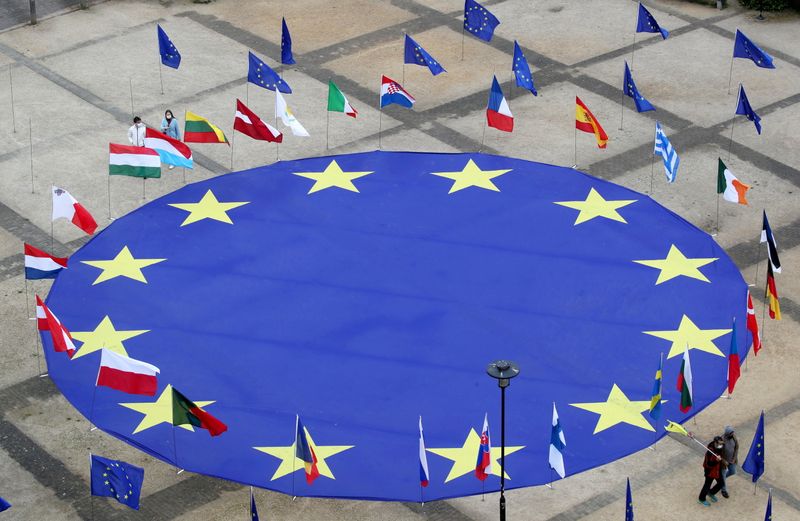 FILE PHOTO: A large European Union flag lies at the centre of Schuman square, outside the European Commission headquarters, on the eve of Europe Day, commemorating the declaration made by Robert Schuman in 1950, in Brussels, Belgium, May 8, 2021. REUTERS/Yves Herman/File Photo/File Photo

(Reuters) – German Chancellor Angela Merkel hosts a summit with six Balkan countries on Monday to forge closer cooperation as they make slow progress in their goal of joining the European Union.

Here are some facts about the six Balkan aspirants:

The EU agreed in March 2020 that Albania, a member of NATO, could start membership negotiations. But Albania has not yet received a date for the start of formal talks because the EU has linked its progress with that of North Macedonia, which is locked in a dispute with Bulgaria.

North Macedonia, like Albania, won EU governments’ approval to start negotiations in March 2020. It overcame a decades-long dispute with neighbouring Greece over its name, agreeing to be called the Republic of North Macedonia. But Bulgaria, which is in the EU, has blocked the start of formal membership talks over a linguistic dispute that Sofia sees as a matter of national identity. No EU country has been able to defuse the issue.

Bosnia, which was at war from 1992 to 1995, is still overseen by EU-led peacekeepers. It submitted an EU membership application in 2016, approval of which is pending. That means it is not yet a candidate country although it is seen as a potential one.

Kosovo, which declared independence from Serbia in 2008, wants to join the EU but is a long way from doing so. It must mend relations with Serbia through EU-mediated talks that are being revived by EU foreign policy chief Josep Borrell. Five EU countries do not recognise Kosovo’s independence: Slovakia, Spain, Greece, Cyprus and Romania.

Montenegro, which joined NATO in 2017, is already in negotiations to join the EU and is seen by the European Commission, the EU executive, as likely to join the bloc later this decade, along with Serbia.

Serbia, the largest non-EU Balkan country with about 7 million people, is already holding membership negotiations. It is seen as the lynchpin in the region and the EU hopes Belgrade’s influence in the Balkans could help others reform. In February 2018, the European Commission said Serbia could join the EU by 2025, though it called it a very ambitious goal.

(Writing by Robin Emmott in Brussels, Editing by Timothy Heritage)