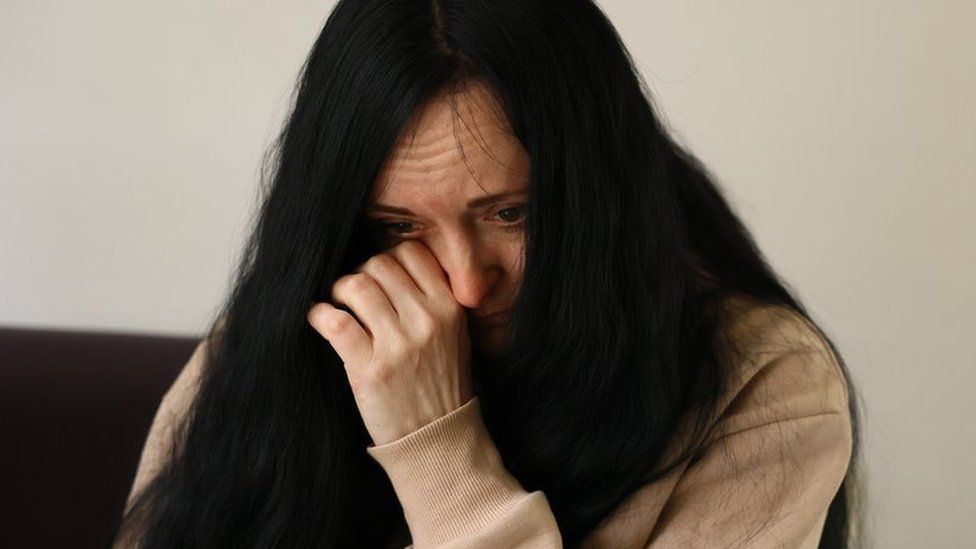 Tens of thousands of civilians remain trapped in the besieged Ukrainian city of Mariupol, with no electricity, running water or gas. Multiple efforts to open up corridors for aid distribution and the evacuation of residents have failed. For those who have managed to escape, the suffering is far from over, especially for their children.

The first thing they did was buy bread, sausage and water. Nadia Denysenko and her children had escaped after three weeks in Mariupol, under siege and under constant attack, living in their frigid apartment where the windows had blown out after a shell exploded nearby. For days they had very little to eat, and almost nothing to drink.

“We were so happy to have bottled water. We finished it in seconds,” Nadia said, recalling the moment she reached relative safety with her two sons, aged 14 and five, and 12-year-old daughter. “When the war started, my youngest son said ‘Mum, I’d love to have some bread’.”

Theirs is another story of incredible courage amid almost unbelievable tragedy. Inside Mariupol, they spent their days in corridors behind thick walls. Nights were in the basement. They usually woke up at 05:00. The loud explosions, sometimes far, sometimes close, let no-one sleep.

“It was hell. Just hell,” Nadia, who is 39 and used to work at a supermarket in the city, said. “You were living your days not knowing whether you’d wake up alive in the morning.”

Mariupol has seen the worst horrors of Russia’s aggression against Ukraine. Thousands have died as the invading forces surrounded the city, attacking it mercilessly from the air, from the ground and also from the sea. Many are being buried in mass graves, unceremoniously and unnamed. Street after street, building after building, most of it now lies in ruins.

“We were shelled heavily. They didn’t care about anything… My son kept asking, ‘Why are there explosions?’,” Nadia said. “I would tell him, ‘Don’t worry son. It’s just fireworks.”

During their time in the city, neighbours cooked the little food they had in a field kitchen in the street. “We often remained outside because it was warmer than inside,” Nadia said. On their final two days there, they had nothing left to eat. Not even cereal or oatmeal. It did not matter whether you had money. There was no food left in the city.

In one of their attempts to flee, they went to a place where cars had gathered, believing it would be an evacuation point. They came under attack. “It was on purpose,” she said. They only survived, Nadia said, after a man pushed her and the children “like puppies” inside a damaged building, where they thought they would be protected.

“When we left,” she said, “we witnessed something terrible.” A car was hit by a shell. The driver, a soldier who was trying to take his family out of the city, was wounded in the head. She and others brought him to a basement, where a girl, who was not a doctor, gave him some stitches using an ordinary needle and thread.

“After seeing all of this we came back home and my younger son asked me, ‘Mum, why are they trying to kill us?’,” Nadia said.

Days later, on 17 March, they finally managed to drive out of the city, as part of a convoy of private vehicles. First, they reached the village of Mangush. They then headed to Berdyansk, which is under Russian control. From there, they boarded a bus to Zaporizhzhia. The road, she said, was full of checkpoints set up by Russian soldiers or Russian-backed separatists.

“They checked us, especially the men, our phones,” Nadia said. Knowing that could happen, she had already deleted all pictures she had from Mariupol. “When we left the city, I was all dirty and covered with mud. I hadn’t taken a shower. When you’ve got nothing to drink, you don’t think about taking a shower.”

It took them five days to travel from Zaporizhzhia to Lviv, in western Ukraine, a region that has been largely spared of Russia’s attacks. One of the few signs here that this is a country at war is the sound of air raid sirens, which can go off several times a day.

“We’re safe and we can buy food, but my son still hides food: bread, candies. He hides it in different parts of the flat where we’re staying,” she said.

She asked him why he was doing that.

“He said, ‘So I’ll have something to eat tomorrow.'”

Nadia thinks her children will be able to overcome what they went through. She said her daughter, who did not want to come with her for our interview, was a communicative person but still had not made friends in their new city.

She wants to be able to return to Mariupol one day, when the war is over and the city rebuilt.

“There is nothing of it left… The city was blossoming and developing. It was just perfect,” she said. The only thing they did not have, Nadia said, was McDonald’s.

“I just don’t understand why it all happened. Why did they do it?”