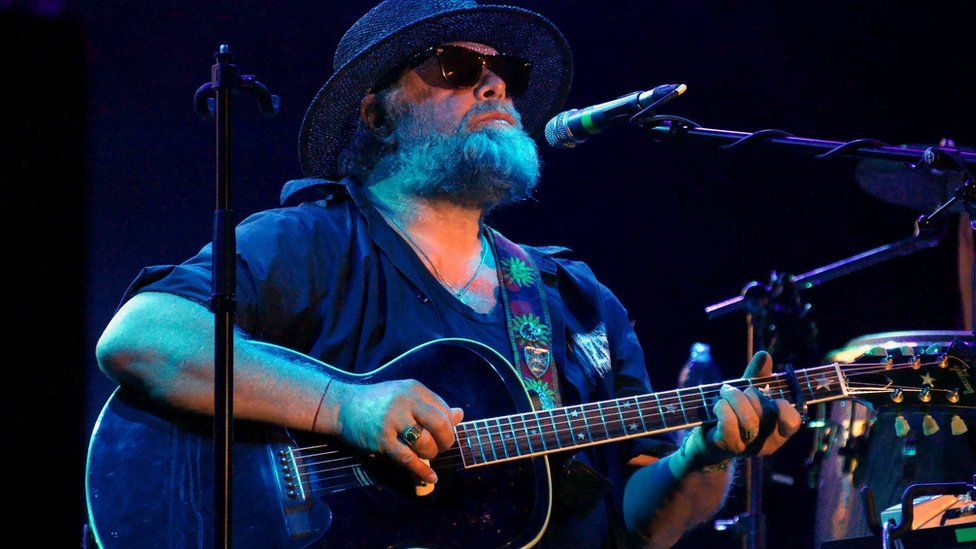 A few days after Russia’s invasion of Ukraine, one of Russia’s largest media companies, Russian Media Group (RMG), released a statement explaining why it would no longer be playing certain artists on its popular radio stations or music TV channel.

“The reason for this decision was the harsh statements these musicians made towards Russia in the context of the difficult situation between Russia and Ukraine,” the statement read.

It explained that respect for its listeners was the company’s top priority, and the “arrogant and contemptuous attitude of the musicians towards Russian listeners” left it no choice but to terminate its contract with the artists.

The list included several Ukrainian musicians and three Russian acts, including legendary rock group Aquarium, whose lead singer, Boris Grebenshchikov, had called the war “madness” in a post on Instagram. He is no stranger to political pressure.

“I’ve spent half my life under some sort of ban”, Mr Grebenshchikov told the BBC. “There were bans in the 70s, bans in the 80s – there’s nothing unusual about it. Then the same people who ban you give you prizes.”

The pressure on dissenting voices in the music industry marks a stark contrast to those artists who are loyal to the Kremlin, some of whom performed last week at a glitzy, made-for-TV stadium concert which featured Vladimir Putin as the headline act.

Tens of thousands of people waved Russian flags and chanted pro-Russian slogans at the event celebrating the eighth anniversary of Russia’s annexation of Crimea from Ukraine. Many of them told the BBC they had been pressured to be there.

On the first day of the war, Ukrainian singer Ivan Dorn published a video on Instagram calling for Russians to “end this catastrophe” and “not to participate in this murderous war”.

Days later he found himself on the list of acts banned by the Russian Media Group, and his name appeared on another “black list” leaked to Russian media, demanding that certain musicians are banned from performing because of their anti-war views. The list was reportedly circulated to music venues and promoters in Russia.

But Mr Dorn told the BBC that being blacklisted in Russia made no difference to him.

“Any cooperation with Russia was impossible even before the announcement of any list,” he said.

“Does anyone within the organs of the Russian state really think we want to work with the aggressors who are exterminating the Ukrainian nation, murdering thousands of innocent people, building a totalitarian regime and putting their own people in jail for dissent?”

It isn’t clear who created the “black list” or where it originated, and the BBC cannot confirm its authenticity, but music industry insiders say such documents are not uncommon.

“It’s never indicated where they come from – no name, phone number, email, official stamp. It can look like a fake – just a printed list with the names of musicians, writers or comedians,” music manager Elena Saveleva told the BBC. Her client, rapper Noize MC, is on the list.

According to Ms Saveleva, pressure on promoters usually comes from regional security services, with officials turning up at concert halls and threatening them with closures and fines.

The art director of Moscow’s oldest club, 16 Tons, believes the document could be fake.

“I haven’t seen it and no officials have come to see me, even though usually we are the first club they visit,” Pavel Kamakin told the BBC.

The ambiguity surrounding the list’s origin makes it difficult for promoters, musicians and venue owners to know how seriously to take it.

Whatever its origins, the list reflects the increasingly unpredictable environment for people in Russia who disagree with the war.

For some musicians, that means the only option is to perform abroad.

Russian rapper Oxxxymiron, whose name appears on the “black list” circulated by Russian media, cancelled his upcoming tour in Russia and has instead organised charity concerts abroad – known as “Russians Against War” – to raise money for Ukrainian refugees.

Announcing the postponement of his Russian tour, Oxxxymiron explained that he could not “entertain people while Russian rockets fall on Ukraine, while residents of Kyiv are forced to hide in their basements and the metro, and while people are dying”.