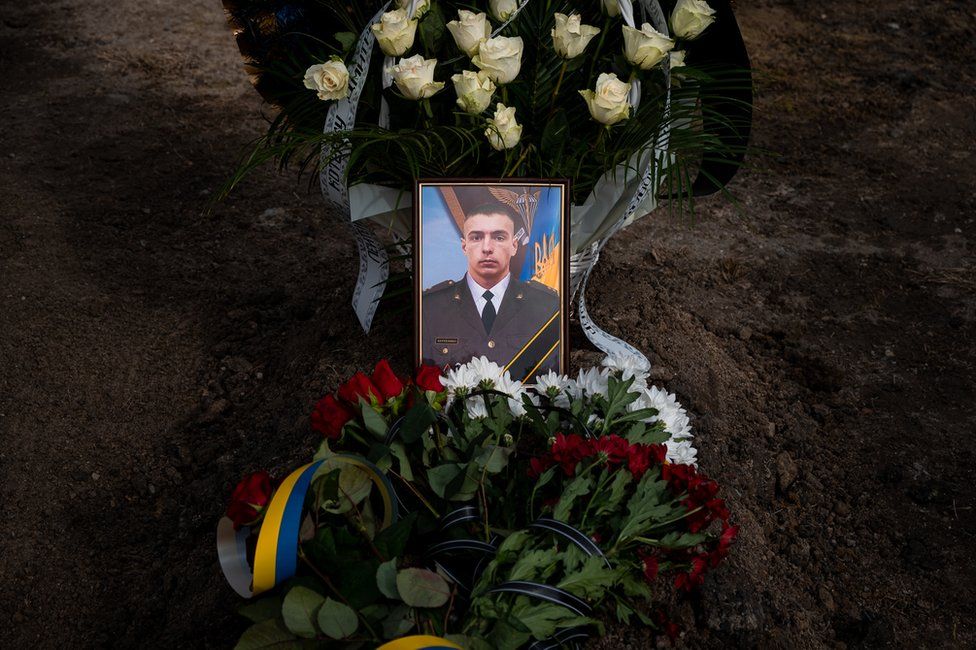 There was no family around Dmytro Kotenko when they put him in the ground. His parents did not hear the gunshots that rang out over his grave. They did not hear the sound of the ribbon tied to the wooden cross above him as it fluttered in the wind. They did not see the rough earth that first landed on his coffin and they did not lay a flower over him when he was completely covered by the earth.

Most likely, Kotenko’s parents did not know their son was being buried that day in the Lychakiv Cemetery in Lviv. They were 600 miles away, with his two younger brothers, near the eastern city of Sumy, which was being so heavily shelled by Russian forces that it was cut off from the outside world.

Kotenko’s parents did know that their son was dead. He died on 26 February, the third day of the Russian invasion, near to the southern city of Kherson. It was his first operation. He was 21. Two days after his death, his parents received a call from his childhood friend Vadym Yarovenko, an artillery soldier, who broke the news.

It had taken Yarovenko all night to work up the courage to make the call — a long and restless night on his army bunk in Lviv, alone with the knowledge that Kotenko was gone. They were just boys when they met, all of 15 years old, with fresh haircuts and new uniforms for their first day at military school. When they discovered they were from adjacent villages, it was the beginning of a friendship that might have lasted for a lifetime.

Kotenko’s father was a truck driver. His mother worked on a local farm. “To join the army meant to come up in the world,” Yarovenko said. “I think this was part of the reason Dmytro signed up.” The Kotenkos were a poor family, two parents and three sons, with a modest house in a small village on the Russian border in eastern Ukraine — the very people the Russian president Vladimir Putin claims he is rescuing from the yoke of Ukrainian oppression.

Russia’s annexation of Crimea in 2014, and the grinding war that followed in Donbas in eastern Ukraine, was another reason they signed up, Yarovenko said. “We knew that something like this could happen,” he said, “and we would have to go and defend our land.” When people from the village asked why they wanted to join the army in wartime, Kotenko would say, “If not me then who?”

Yarovenko’s father also drove a truck, and at the military school in Sumy the boys bonded over their love of cars. Yarovenko, an only child, had found something like a brother in Kotenko. “Neither of us liked the city-like entertainment, clubs etc,” Yarovenko said. “We loved spending time in nature — fishing, hunting, picnics. We loved to go to the river with friends.”

They worked together on an old car — a Red Zhyguli — that Kotenko was fixing up on his family plot. They repaired motorbikes and drove them on the rural roads around home. They got to know each other’s families.

“Dmytro’s parents loved him and he loved them,” Yarovenko said, wiping tears from his cheeks. “Dmytro would always help them with repairs, he was good at that. Even at school or at the academy he would always help. He was very good to his parents. I never heard them argue.”

“We messaged each other every day,” Yarovenko said. “We talked about everything. Regular things — how are you? What is happening where you are? We were close friends, we just talked.”

For a while last year, from July to October, they were reunited when Kotenko was stationed in Lviv. They went running together on the weekends and trained together. It was a happy time. On 31 December, their families got together to ring in the new year, and a month or so later Kotenko came to Lviv to visit Yarovenko before deploying south on an operation. They stayed up late, drinking a little and talking. Along Ukraine’s borders, Russia’s forces were massed, waiting for orders to invade, but in Lviv life was normal and that night the war felt like a distant thing.

The next morning, Kotenko and Yarovenko said their goodbyes and Kotenko went south. They continued messaging every day. On 26 February, Kotenko stopped responding, and Yarovenko feared the worst. Eventually he reached the commander of Kotenko’s unit by phone, who told him his friend had been killed by a mortar shell.

“I don’t have all the details yet,” Yarovenko said. “There was shelling, there was an explosion, Dmytro died.”

When he dialled the number for Kotenko’s parents, there was still a phone connection, and in a short conversation he told them that their son was gone. When he tried to call later about the funeral, the aerial bombardment of Sumy had worsened and the line would not connect. He kept trying but the line stayed dead. So Kotenko’s body was brought to Lviv and buried there without them, because the city was safe from falling shells.

Yarovenko travelled alone from his base to the Saints Peter and Paul Garrison Church, and he stood alone on one side of the nave, under its vaulted ceiling painted with saints, as smoke from burning incense drifted over the priests and mourners.

Next to where he stood, there are boards mounted with pictures of Ukraine’s war dead. The first pictures were put up by the chaplains in 2014, to honour the fallen soldiers who had been members of the church. Then bereaved parents from around Lviv saw the pictures and wanted their sons and daughters to be there, and gradually the collection of portraits grew.

“They bring us photographs because they know we pray every day for those who died in war,” said Father Vsevolod, one of the chaplains. “We are part of this city’s mission to bury army men and women with honours, so their acts of bravery are never forgotten.”

Before the invasion, the church held a funeral for a soldier once or twice a month, Father Vsevolod said. Now it was burying two or three men a day. None of the recent dead had yet been added to the wall of portraits. Kotenko was not there. But the pictures would be put up, Father Vsevolod said, and if a family was cut off and did not know their son was being buried in Lviv, the church would add it for them.

On the day of Kotenko’s funeral, there were three coffins in the church. One of the men was from a village near Lviv and the church was filled with his family and friends, and afterwards they took him home. The two other coffins went quietly to the Lychakiv Cemetery, with a small group of soldiers from a local unit who help to commemorate the dead.

Kotenko was buried alongside Kyrylo Moroz Volodymyrovych, 25, a paratrooper from his unit, who could also not be taken home. They were laid to rest in a far corner of the cemetery, among the dead from the first and second world wars and the war with Russian-backed forces in Donbas.

Kotenko and Volodymyrovych were the fourth and fifth men killed in this invasion to be buried at the Lychakiv. Their graves were almost bare, but for a bunch of roses and a bunch of asters laid by the church and marked with designation of their unit. The three other graves, for soldiers from Lviv, were festooned with flowers and lanterns.

The following day, the gravediggers at the Lychakiv buried two more men. The day after, three. Eventually, the wooden crosses bearing their names will be replaced by headstones that will hold their memory here for good.

“Thank God we do not have fighting yet here in Lviv,” said the groundsman, “so we can bury the soldiers who are defending our home.”

Yarovenko is still trying to reach Kotenko’s parents, but the line is dead. They are likely still trapped in Sumy. The invasion has robbed them first of their son, and then of one of the few things that might have ameliorated their grief — the right to be by his side when went into the ground.

As Kotenko’s coffin was lowered, Yarovenko stood to one side, behind the honour guard that fired the guns. It was the saddest thing he had ever experienced. “I watched my friend being buried far from his home,” he said. Afterwards, he stood silently, looking at the grave, the sole mourner left, alone with the gravediggers as they cleared away their tools.

“We never got the chance to meet at the front,” he said. All that was left was the hope of speaking to Kotenko’s parents soon, and the memory of their son, which he will carry with him as he waits for his turn to fight and carry with him to the frontline when he goes.