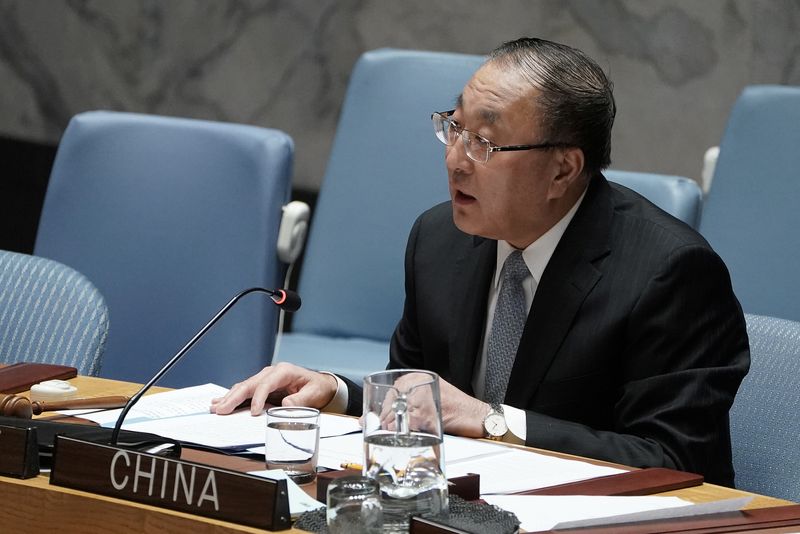 UNITED NATIONS (Reuters) – The key to solving the issue of North Korea’s ballistic missile and nuclear programs is “in the hands” of the United States, China’s U.N. Ambassador said on Friday, urging Washington to show “more sincerity and flexibility” if it wants a breakthrough.

“The key in solving this issue is already in the hands of the United States,” he told reporters ahead of a closed-door U.N. Security Council meeting on North Korea.

The 15-member council met on Friday at the request of the United States to discuss North Korea’s launch of an intermediate-range ballistic missile last Sunday.

Nuclear tests and ballistic missile launches by North Korea are banned by the U.N. Security Council. Diplomats said the United States has proposed the council issue a statement.

“Whether the Security Council should issue something or not, should depend on whether it’s helpful for the de-escalation of the tensions,” Zhang said. “I do wish that all parties concerned, including council members, should stay prudent in words and actions and avoid further escalation.”

North Korea confirmed on Monday it had launched a Hwasong-12 ballistic missile, the same weapon it had once threatened to target the U.S. territory of Guam with, sparking fears the nuclear-armed state could resume long-range testing.

It was the first time North Korea had tested a nuclear-capable missile of that size since 2017. Pyongyang had put nuclear weapons tests and long-range ballistic missile launches on hold while leader Kim Jong Un met with then-U.S. President Donald Trump in Singapore in 2018 and Vietnam in 2019.

Zhang cited those meetings and the suspension of tests, asking: “What has been done by the U.S.?”

Diplomacy with North Korea has stalled since the summits between Trump and Kim, which failed to produce a deal. Pyongyang wants U.S. and U.N. sanctions to be removed. There has been no easing of any U.S. or U.N. measures, but China and Russia have said the Security Council should consider such a move.