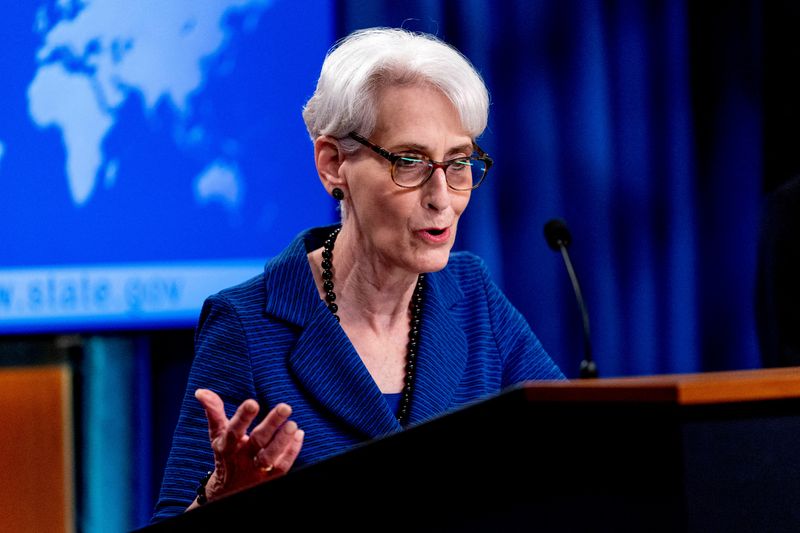 By Simon Lewis and Mark Trevelyan

WASHINGTON (Reuters) – Talks between U.S. and Russian diplomats begin in Geneva on Monday after a weekslong stand-off over Russian troop deployments near its border with Ukraine, with veteran envoys on each side trying to avert a crisis.

Deputy Secretary of State Wendy Sherman, the No. 2 official at the U.S. State Department, will face Russian Deputy Foreign Minister Sergei Ryabkov. The two combined have more than half a century of diplomatic experience.

Russia, which moved nearly 100,000 troops close to its border with Ukraine, says it is not preparing for an invasion but wants to see the West back off from its support for Ukraine’s government and halt the eastward expansion of the NATO military alliance.

Washington has already dismissed some of Moscow’s demands as unviable, making rapid progress desired by Russia in the meetings unlikely.

An added wrinkle is Russia sending troops to quell anti-government protests in neighboring Kazakhstan this week, raising concern in Washington.

The U.S. approach would be “pragmatic, results-oriented,” White House spokesperson Jen Psaki said in a press briefing on Wednesday. “We’re not responding to them point by point.”

In a phone call last week between Presidents Joe Biden and Vladimir Putin, Biden reiterated that the U.S. and European allies would impose unprecedented sanctions if Russia chose to invade Ukraine. Putin responded that sanctions could lead to a “complete breakdown in ties.”

Ryabkov told the Izvestia newspaper this week that Russia’s approach was necessarily tough, because its previous attempts at persuasion had been fruitless.

Ryabkov repeated Moscow’s demands for a halt to NATO enlargement, no deployment of its weapons systems in Ukraine and an end to “provocative” military exercises.

“All these are absolutely necessary integral elements, without which we will be forced to state that the other side is showing a lack of cooperation,” he said.

Other officials will also play lead roles when the talks move to Brussels for a NATO-Russia meeting on Wednesday and a meeting hosted by the Organization for Security and Co-operation in Europe on Thursday.

Sherman and Ryabkov will lead the two delegations in Geneva, where talks over Ukraine are taking place at a meeting initially scheduled as the latest Strategic Stability Dialogue between the two adversaries. The regular talks designed to head off the possibility of nuclear confrontation resumed in July following a meeting between Biden and Putin the previous month.

Thomas Graham, a former senior director for Russia on the White House’s National Security Council, said Sherman and Ryabkov were vastly experienced and would conduct the talks professionally, understanding that the task is to defuse the current crisis.

“There aren’t going to be raised voices or pounding on the table,” said Graham, now a distinguished fellow at the Council on Foreign Relations. He said a positive outcome for the United States would be for Russia to agree to a program of further talks.

Andrey Kortunov, an analyst who heads the Russian International Affairs Council, said the Kremlin might see confidence-building measures and some constraint from the West in supplying modern weaponry to Ukraine as sufficient to reduce tensions.

Sherman, 72, a former social worker, has served in Democratic administrations since the 1990s. She is best known for leading negotiations on the 2015 nuclear accord between Iran and world powers, which also involved dealing with Russian diplomats.

Sherman, like the deal itself, was criticized by hawks in Washington as being too soft on Iran. In Iran, anti-American protesters reportedly chanted “Death to Sherman” during the negotiations.

In her previous role as under secretary of state, Sherman traveled to Kyiv in March 2014, where she spoke about holding back tears as she walked through the Maidan, the central Kyiv square where Ukrainians gathered in protests that toppled a Russian-backed government.

Sherman said she was approached by “schoolchildren with flowers” rather than the “dangerous elements” Moscow said were behind the protests, and issued a warning to Putin over his annexation of Crimea and the conflict involving Russia-backed separatists in the Donbass region.

Ryabkov, 61, is a 40-year veteran of the Soviet and Russian foreign ministries who in recent weeks has delivered some of Moscow’s harshest rhetoric and direst warnings on the Ukraine crisis.

He has more than once compared the situation to the 1962 Cuban missile crisis, when the world came close to nuclear war, and has warned that Russia might be compelled to deploy intermediate-range nuclear weapons in Europe.

Kortunov, who has known Ryabkov for years, said the diplomat was less hawkish than some members of Russia’s security establishment but would be as flexible or rigid as the Kremlin required.

“At the end of the day it’s up to Mr Putin to define the red lines, not Ryabkov, and Ryabkov will do his best to articulate the red lines,” said Kortunov.

(Reporting by Simon Lewis in Washington and Mark Trevelyan in London; additional reporting by David Brunnstrom and Trevor Hunnicutt in Washington; Editing by Mary Milliken and Grant McCool)