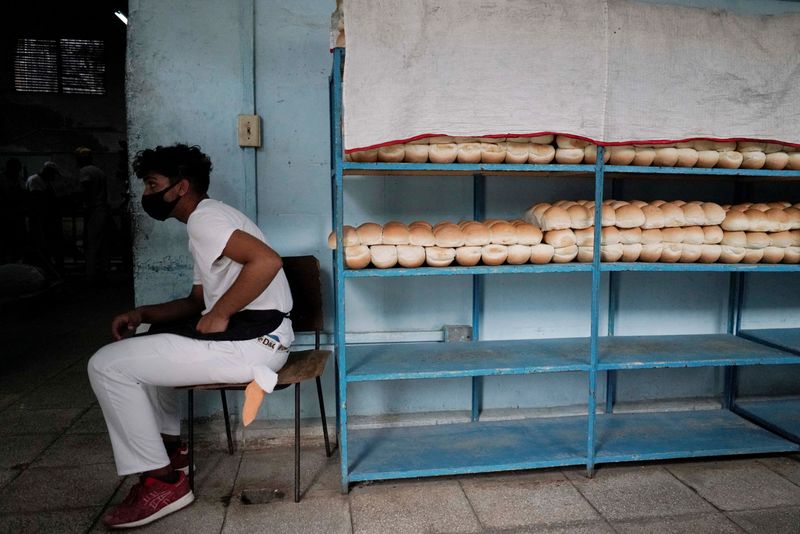 FILE PHOTO: An employee sits beside bread stored on shelves inside a bakery in Havana, Cuba, May 18, 2021. Picture taken on May 18, 2021. REUTERS/Alexandre Meneghini/File Photo

(Reuters) – Venezuela has ramped up shipments of gasoline and food to Cuba since November, providing key supplies to one of President Nicolas Maduro’s closest allies, according to documents from Venezuelan state-run oil company PDVSA and Refinitiv Eikon tanker tracking data.

From late November through early January, PDVSA shipped at least three cargoes carrying about 197,000 barrels of gasoline, along with other refined products to Cuba’s Nuevitas, Matanzas and Havana ports, the documents and data showed.

The cargoes arrived at the Caribbean nation’s ports aboard the Cuban-flagged tankers Maria Cristina and Alicia.

PDVSA, Venezuela’s oil ministry and Cuba’s foreign ministry did not reply to requests for comment.

Venezuela had minimized gasoline exports to Cuba since early 2020 as its domestic production dwindled due to the poor condition of PDVSA’s refineries. Fuel shortages in the OPEC nation have left long lines of consumers waiting for gasoline and diesel at stations.

Both Venezuela and Cuba are under U.S. sanctions, including on oil supply and shipping between the nations, for what Washington says are their repressive policies. The left-leaning governments in Caracas and Havana blame the sanctions for worsening humanitarian conditions in their countries and accuse the United States of trying to topple them.

The shipments came as gasoline production rebounded in Venezuela. The South American country from mid-2020 to mid-2021 had been forced to turn to Iran for imported gasoline to complement its domestic output.

But, thanks in part to supplies of refinery parts from Iran that allowed PDVSA to undertake long-delayed maintenance work and repairs, Venezuela has increased its output of gasoline blendstock and components to almost 160,000 barrels per day (bpd) this year, according to sources.

Venezuela’s overall oil supply to Cuba last year fell to 56,300 bpd of crude and refined products and some 73,000 metric tonnes of petroleum coke, from 76,600 bpd and 100,000 metric tonnes respectively the previous year, according to an analysis of PDVSA’s export reports and tanker tracking data.

Since December, Venezuela also has exported 222 containers and hundreds of bags of food on ships Icoa Uru and Melba, which discharged at Cuba’s Mariel and Santiago ports, the documents and data showed.

The recent cargoes followed humanitarian deliveries of food and medical equipment by Venezuela and Mexico, which were confirmed in August by Cuban authorities. Russia and China also provided assistance to the island last year amid the coronavirus pandemic.

Venezuela’s opposition has long criticized the government’s decision to supply fuel to Cuba amid widespread shortages at home. The lack of enough output in 2018 led PDVSA to buy nearly $440 million worth of foreign oil and ship it to Cuba on friendly credit terms, and often at a loss, a Reuters investigation found https://www.reuters.com/article/us-venezuela-oil-imports-exclusive/exclusive-as-venezuelans-suffer-maduro-buys-foreign-oil-to-subsidize-cuba-idUSKCN1IG1TO.

Cuba, short on fuel and food supplies for decades, was in particularly dire straits last year, as the pandemic struck the island nation mid-year, alongside widespread protests and shortages of energy and basic supplies.

Maduro, who has visited Cuba twice in recent months, has said U.S. sanctions on Venezuela and any attempts to block its trade with countries including Cuba are illegal.

Venezuelan diesel provision to Cuba was among the arguments used by the United States to suspend in 2020 the authorizations it had extended for oil-for-fuel swaps, allowing PDVSA to allocate crude exports while importing diesel.

The U.S. Department of Treasury, in charge of sanction enforcement, declined to comment.

(Reporting by Marianna Parraga in Houston and Mircely Guanipa in Maracay, Venezuela; Editing by Marguerita Choy)