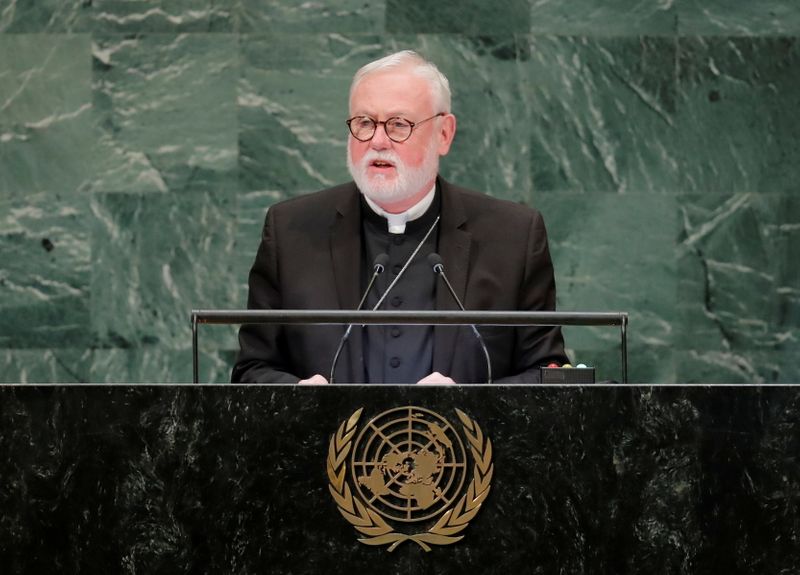 VATICAN CITY (Reuters) – The Vatican hopes a meeting where world religious leaders will take a common stand on the environment can “raise ambitions” on what can be achieved at next month’s U.N. Climate Change Conference, its foreign minister says.

Monday’s day-long event, organised by the Vatican, the United Kingdom and Italy, brings together about 40 faith leaders of the world’s major religions and scientists, from about 20 countries.

The leaders, including Pope Francis, will sign a joint appeal and hand it to Italian Foreign Minister Luigi Di Maio and Britain’s Alok Sharma, president of the U.N. gathering known as COP26 in Glasgow.

“It is our hope that (the Monday meeting) will give an impact to opinion in general but within our faith groups and faith families and also within the political community to raise ambitions with regards to what can be achieved by COP26,” said Archbishop Paul Gallagher.

Speaking in a telephone interview with Reuters on Sunday, Gallagher said the Vatican hoped the direct appeal to COP26 leaders would have the same effect as the pope’s landmark 2015 environmental encyclical “Laudato Si” (Praised Be).

It drew massive attention to climate crisis and spurred activism by faith groups.

“Most of the religions represented, whether it’s through their sacred scriptures or their traditions or the spirituality that they represent, have the basis for a renewal of our relationship with the environment and with the planet,” Gallagher said.

The meeting is called “Faith and Science: Towards

COP26″. It brings together Christian leaders, including the pope, Archbishop of Canterbury Justin Welby and the Orthodox ecumenical patriarch Bartholomew, as well as representatives of Islam, Judaism, Hinduism, Sikhism, Buddhism, Confucianism, Taoism, Zoroastrianism and Jainism.

The pope, Welby and Bartholomew issued a joint appeal https://www.reuters.com/business/environment/worlds-top-three-christian-leaders-climate-appeal-ahead-un-summit-2021-09-07 to members of their Churches last month to “listen to the cry of the earth”.

Scotland’s bishops said in July that the pope will attend the opening of COP26, health permitting. A decision is expected in the next few days.

Francis strongly supports https://www.reuters.com/world/europe/you-are-making-future-today-pope-tells-youth-climate-activists-2021-09-29 the goals of the 2015 U.N. Paris accord to reduce global warming. Over the weekend, he told young people that theirs was “perhaps the last generation” to save the planet.

Gallagher, who is British, said it was “a sign of great hope” that U.S. President Joe Biden returned the United States to the Paris accords after his predecessor Donald Trump pulled out. Biden and the pope are expected to meet at the Vatican at the end of October.

“Translating commitment into action is the great problem and we all know that our political leaders are very good at promising and very good at talking but the action that we need now is urgent and it is enormous,” he said.

He said the Vatican hoped Monday’s conference would underscore the need for “an ecological conversion in the way we relate to the planet”, and the realisation that lifestyle changes would be necessary but not easy.

“Most aspects of life have a political dimension and if you are going to say that faith should also be part of every part of your life then obviously your faith is going to affect your politics,” Gallagher said.

He said organisers did not consider inviting the Dalai Lama, the exiled spiritual leader of Tibet’s Buddhists, who is not recognised by China.

“His Holiness the Dalai Lama knows how well he is respected here by the Holy See but he also appreciates that our relations (with China) are complicated and difficult and he has always respected that and we appreciate that very much and so the dialogue goes on with Buddhism on many, many levels,” he said.