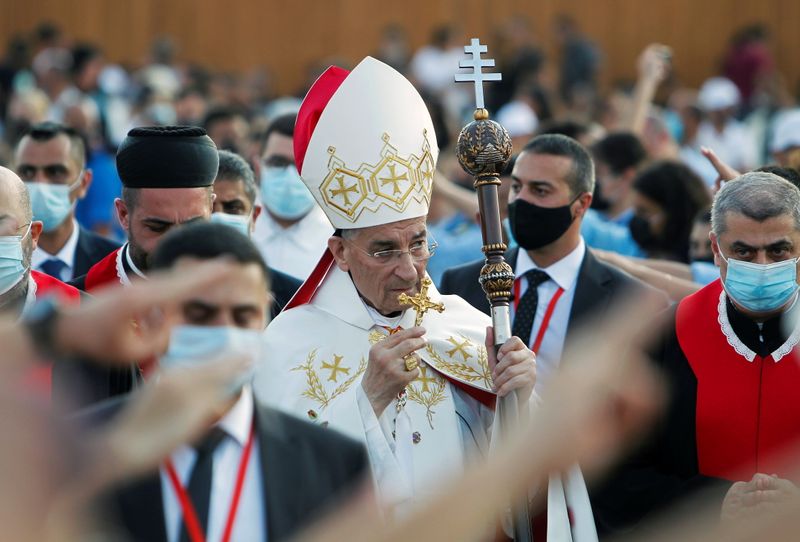 FILE PHOTO: Lebanese Maronite Patriarch Bechara Boutros Al-Rai arrives to lead a mass in memory of the victims, as Lebanon marks one-year anniversary of the explosion at the port in Beirut, Lebanon August 4, 2021. REUTERS/Aziz Taher

AMMAN (Reuters) – Lebanon’s top Christian cleric said on Sunday the government should put an end to any meddling in the judiciary after the probe into last year’s vast Beirut port blast was halted by the latest of a series of complaints against the lead investigator.

The investigation was frozen on Monday when a former minister wanted for questioning as a suspect filed a case questioning the judge’s impartiality.

The move followed a smear campaign by Lebanon’s political class against Judge Tarek Bitar and a warning by a senior official of the powerful heavily armed Iran-backed Hezbollah group to Bitar that he would be removed.

Maronite Patriarch Bechara Boutros Al-Rai, who has been sharply critical of Hezbollah, said in a Sunday sermon that political pressure on Bitar weakened the authority of the judiciary and could put international aid for Lebanon at risk.

“It’s true that the government should not interfere in the judiciary but it is it’s duty to intervene to stop any meddling in the affairs of the judiciary,” he added.

The Aug. 4 2020 Beirut port blast, caused by a large amount of ammonium nitrate stored unsafely for years, killed over 200 people but more than a year on no one has been held accountable.

Bitar is the second judge whose investigation has been stymied by powerful factions in Lebanon, where a lack of high-level accountability are blamed for systemic corruption, governing gridlock and economic meltdown.

Judge Fadi Sawan, the first to lead the probe, was removed in February on the back of a legal complaint that questioned his neutrality, similar to the one that has now frozen the investigation.

Hezbollah leader Sayyed Hassan Nasrallah last month accused Bitar of bias and “playing politics” but said he was not calling for his immediate removal. A senior official from the group was later reported to have threatened to get Bitar fired.

A judicial source said the judiciary were following up on the threat. Hezbollah officials and the justice minister could not be reached for comment.

Prime Minister Najib Mikati said he hoped Bitar would stay in his job and announced that security precautions had been taken as a result of threats but said the decision to freeze the probe was a judicial matter.