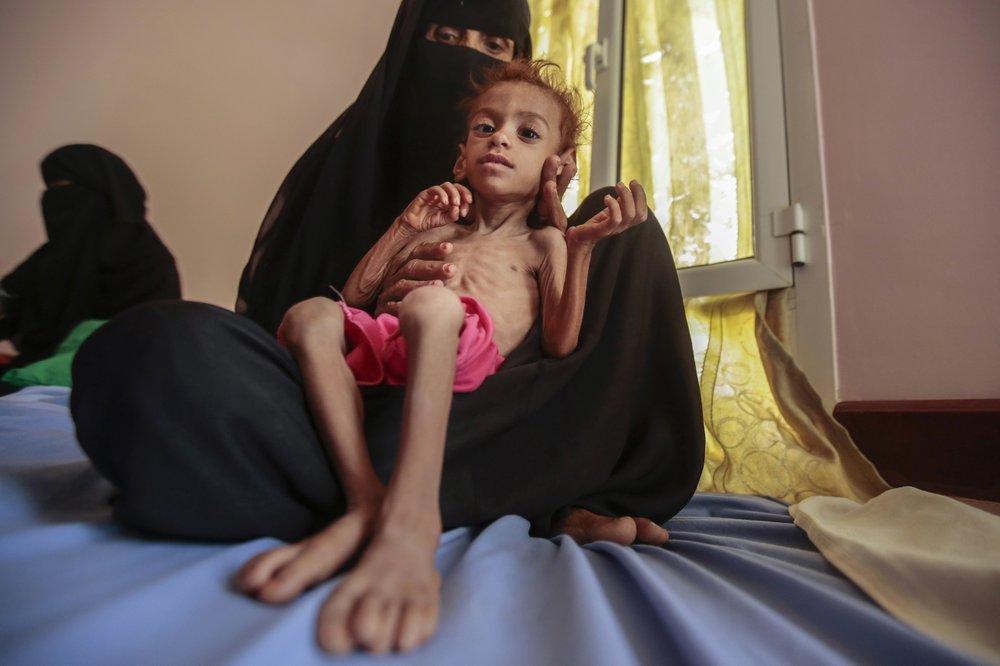 FILE – In this Oct. 1, 2018, file photo, a woman holds a malnourished boy at the Aslam Health Center, in Hajjah, Yemen. A leading aid organization on Monday warned that U.S. Secretary of State Mike Pompeo’s move to designate Yemen’s Iran-backed Houthi rebels as a “foreign terrorist organization” would deal another “devastating blow” to the impoverished and war-torn nation. (AP Photo/Hani Mohammed, File)

CAIRO (AP) — The Trump administration’s out-the-door decision to designate Yemen’s Iranian-backed rebels as a terror organization sparked confusion in aid agencies and warnings from the United Nations and senior Republicans on Monday that it could have a devastating humanitarian impact on a conflict-wracked nation facing the risk of famine.

The Biden transition team has not yet expressed his intentions.

The Iranian-supported Houthi rebels rule the capital and Yemen’s north where the majority of the population lives, forcing international aid groups to work with them. Agencies depend on the Houthis to deliver aid, and they pay salaries to Houthis to do so.

U.N. spokesman Stephane Dujarric said the U.N.’s humanitarian operation is huge and the U.S. action “is likely to have serious humanitarian and political repercussions.”

Sen. Jim Risch, the Republican chairman of the Senate Foreign Relations Committee, and Rep. Michael McCaul, the top Republican on the House Foreign Affairs Committee, expressed concern in a joint statement that without mitigating measures in place the U.S. designation “will have devastating humanitarian impacts.”

“Good intentions must not be eclipsed by significant unintended consequences,” they warned. “Yemen imports 90 percent of its food. In light of near-famine conditions … this designation will have a devastating effect on Yemen’s food supply and other critical imports unless the executive branch acts now to issue the necessary licenses, waivers and appropriate guidance prior to designation.”

Dujarric also said it is “imperative for the U.S. to swiftly grant the necessary licenses and exemptions,” expressing fear that the private sector will not want “to get in the crosshairs of any sort of unilateral sanctions” as it has done in past situations, “so they sort of self-censor and hold back.”

Six years of war between a U.S.-backed Arab coalition and the Houthi rebels have been catastrophic for Yemen, killing more than 112,000 people and reducing infrastructure from roads and hospitals to water and electricity networks to ruins. It began with the Houthi takeover of the north in 2014, which prompted a destructive air campaign by the Saudi-led coalition, aimed at restoring the internationally recognized government.

Most of Yemen’s 30 million people rely on international aid to survive. The U.N. says 13.5 million Yemenis already face acute food insecurity, a figure that could rise to 16 million by June.

Some aid agencies said they were considering pulling out foreign staff.

They warned that even if the U.S. grants humanitarian exceptions as Secretary of State Mike Pompeo promised Sunday, the move could snarl aid delivery, drive away banks, and further wreck an economy in which millions can’t afford to feed themselves.

Houthi officials were defiant over the U.S. designation.

“We are not fearful,” tweeted the head of the group’s Supreme Revolutionary Committee, Mohammed Ali al-Houthi. “America is the source of terrorism. It’s directly involved in killing and starving the Yemeni people.”

In Iran, Foreign Ministry spokesman Saeed Khatibzadeh said the designation was “doomed to failure” and the U.S. would eventually have to enter negotiations with the Houthis.

The U.S. designation move is part of the Trump administration’s broader effort to isolate and cripple Iran. It also shows support to its close ally, Saudi Arabia, which leads the anti-Houthi coalition in the war. Saudi Arabia has advocated the terror designation, hoping it would pressure the rebels to reach a peace deal. Past rounds of peace talks and cease-fire agreements have faltered.

The Saudi Foreign Ministry welcomed the U.S. decision, expressing hope the designation would force the rebels to “seriously” return to negotiating table.

But the U.N.’s Dujarric said the designation could hamper efforts by U.N. special envoy Martin Griffiths to revive peace talks by polarizing each side’s positions.

Maged al-Madhaji, the director of Yemen’s most prominent think tank, Sanaa Center for Strategic Studies, said the designation will “shut the doors of (Houthi) attempts to win international legitimacy.” It will also ”paralyze their finances and drain money coming from regional allies,” he said.

The Houthis, who receive financial and military support from Iran, have pelted Saudi cities with missiles and drone strikes. Their opponents say they aim to impose an Iranian-style fundamentalist rule under the group’s religious and military leader, Abdel-Malek al-Houthi.

The rebels have been implicated in stealing aid and using aid access to extort concessions and money, as well as in a catalog of human rights abuses including rape and torture of dissidents.

The U.S., one of the largest donors to Yemen, already suspended millions of dollars in aid to Houthi-controlled areas after reports of theft and looting of relief supplies. U.N. agencies have long complained of rebels stealing and rerouting food aid.

Humanitarian groups said even with special U.S. Treasury licenses promised by Pompeo to allow aid to continue flowing the impact could be disastrous.

Janti Soeripto, president of Save the Children, criticized the “chaotic manner” by which the U.S. took the decision, which she said left agencies scrambling to figure out how to deal with them.

Delays or confusion in the license-issuing process could slow or disrupt imports of food, medicine and fuel.

“Yemen’s faltering economy will be dealt a further devastating blow,” said Mohamed Abdi, Yemen director for the Norwegian Refugee Council. He said banks, businesses and donors could “become unwilling or unable to take on the risk of operating in Yemen.”

If international banks retreat from any dealings with Yemen’s Houthi-dominated banking system, aid agencies and NGOs could be crippled because they must use the banks to move funds, pay salaries and keep operations running. A main income source for individual Yemenis — remittances from relatives abroad — could also be affected.

Once the designation is in effect, the World Health Organization will carry out contingency plans to relocate its international staffers, said its country director in Sanaa, Adham Ismail.

He said the U.S. move will also “make it harder to get donations and deliver health services to Yemenis under Houthi control.

Associated Press writers Nasser Karimi in Tehran, Iran, and Edith M. Lederer at the United Nations contributed to this report.