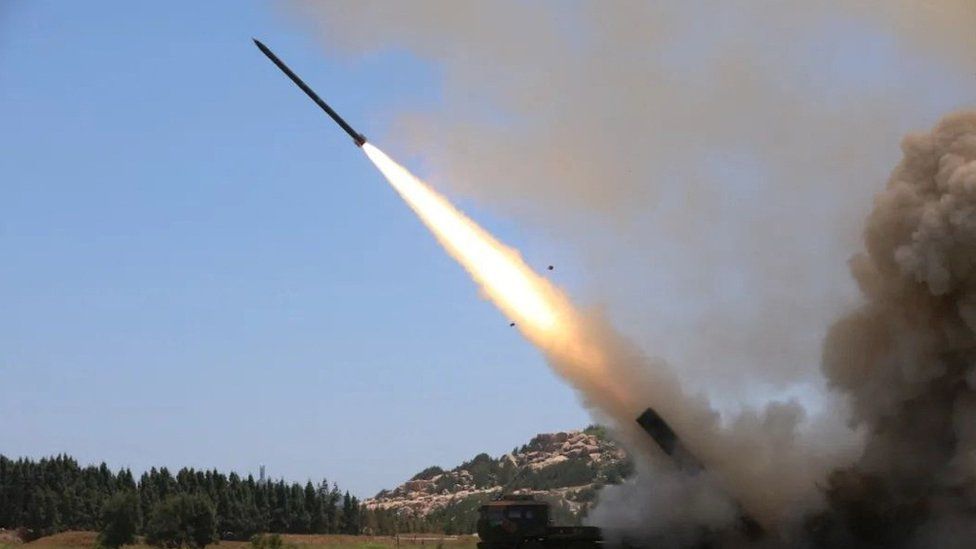 China’s decision to fire missiles over Taiwan must be contested, a top US military commander has said.

Seventh Fleet commander Vice Admiral Karl Thomas said otherwise such action by China would become the norm, calling it “a gorilla in the room”.

Beijing held military drills around the self-governing island earlier this month but did not confirm if any missiles passed directly over it.

Her high-profile visit infuriated Beijing, which claims the self-ruled island as part of its territory.

Tuesday’s comments by Vice Admiral Thomas are significant, Based in Yokosuka, Japan, the Seventh Fleet is the largest forward-­deployed fleet in the US Navy, with some 50 to 70 vessels and submarines – and is a key part of its military presence in the region.

“It’s very important that we contest this type of thing. I know that the gorilla in the room is launching missiles over Taiwan,” Vice Admiral Thomas told reporters in Singapore. “It’s irresponsible to launch missiles over Taiwan into international waters.

“If you don’t challenge it… all of a sudden it can become just like the islands in the South China Sea [that] have now become military outposts. They now are full functioning military outposts that have missiles on them, large runways, hangers, radars, listening posts.”

China’s decision to conduct nearly a week of military drills in the waters around Taiwan disrupted major shipping and aerial routes – a move the island said effectively amounted to a blockade. It also accused Beijing of using the drills as practice for an invasion.

Taiwan said the missiles China fired flew high into the atmosphere and posed no threat. Its defence ministry did not disclose the trajectory of the missiles, citing intelligence concerns.

The Japanese embassy in Washington said it believed four missiles fired by China had passed over Taiwan’s capital Taipei.

The US and other allies have stepped up naval crossings in the Taiwan Strait and the South China Sea, another area of strategic importance to Beijing, to emphasise that these are international waters.

While the US has official diplomatic relations with China and not Taiwan, it maintains a special relationship with the island, which includes selling weapons for defence – an arrangement that has long troubled China.

In recent years it has also become yet another flashpoint between Washington and Beijing as tensions between the two soured.

China and Taiwan: The basics