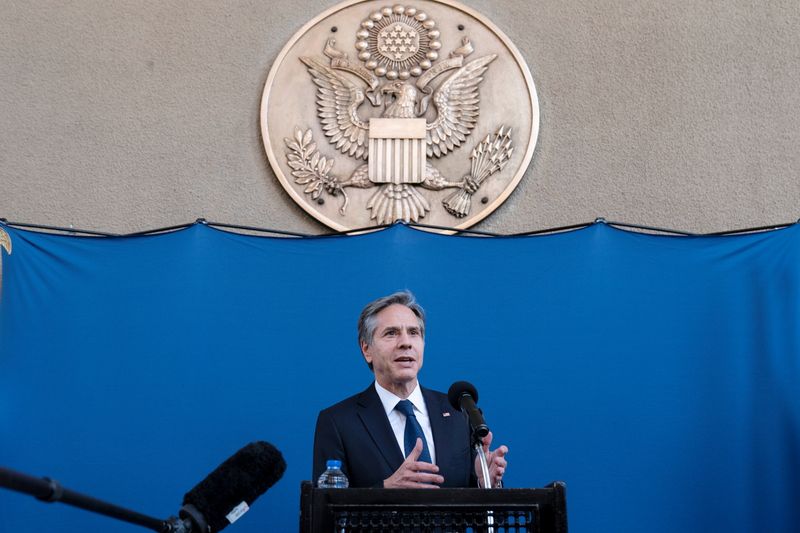 U.S. Secretary of State Antony Blinken speaks as he greets staff members of the U.S. Embassy to Egypt, in Cairo, Egypt May 26, 2021. Alex Brandon/Pool via REUTERS

By Aidan Lewis and Nidal al-Mughrabi

CAIRO (Reuters) -Egypt and the United States said they would work together to reinforce a ceasefire between Israel and Palestinian militants as U.S. Secretary of State Antony Blinken visited Cairo and Amman on Wednesday on a regional tour.

Egypt has longstanding relations with both sides in the conflict and played a key role in brokering the ceasefire after 11 days of violence, in coordination with the United States.

“We’ve had in Egypt a real and effective partner in dealing with the violence, bringing it to a close, relatively quickly,” Blinken said, following a meeting with President Abdel Fattah al-Sisi, Foreign Minister Sameh Shoukry and intelligence head Abbas Kamel.

The two countries were now “working closely together build something positive”, he said, adding that Egypt was vital to shared aspirations for Palestinians and Israelis to “live in safety and security to enjoy equal measures of freedom, opportunity and dignity”.

Sisi told Blinken recent events reaffirmed the need for direct talks between the two sides with Washington’s involvement, according to an Egyptian presidency statement. Sisi also discussed the issue in a video call with German Chancellor Angela Merkel.

Blinken arrived in Egypt after stops in Jerusalem and Ramallah before flying on to Jordan, where he landed in the late afternoon. On Tuesday, he pledged that the United States would provide new aid to help rebuild the Gaza Strip, including $5.5 million in disaster relief and nearly $33 million for the U.N. Palestinian aid agency there.

He also said the United States intended to ensure that Hamas, which controls Gaza and is listed by Washington as a terrorist organisation, did not benefit from humanitarian aid.

Yehya Al-Sinwar, the Hamas chief in Gaza, said the group welcomed Arab and international efforts to rebuild the enclave.

“We have satisfactory sources of money for Hamas and Qassam. A major part of it from Iran and part in donations from Arabs, Muslims and liberals of the world who are sympathetic to our people and their rights,” he added.

Egypt, which shares a border with Gaza and has security contacts with Hamas, is likely to have a role in channeling aid, a senior U.S. State Department official said earlier.

During the fighting, Egypt opened the Rafah border crossing between Gaza and its Sinai Peninsula in order to provide medical aid and evacuate the wounded.

It also sent a security delegation to Israel and Gaza to reinforce the ceasefire after it came into effect on Friday.