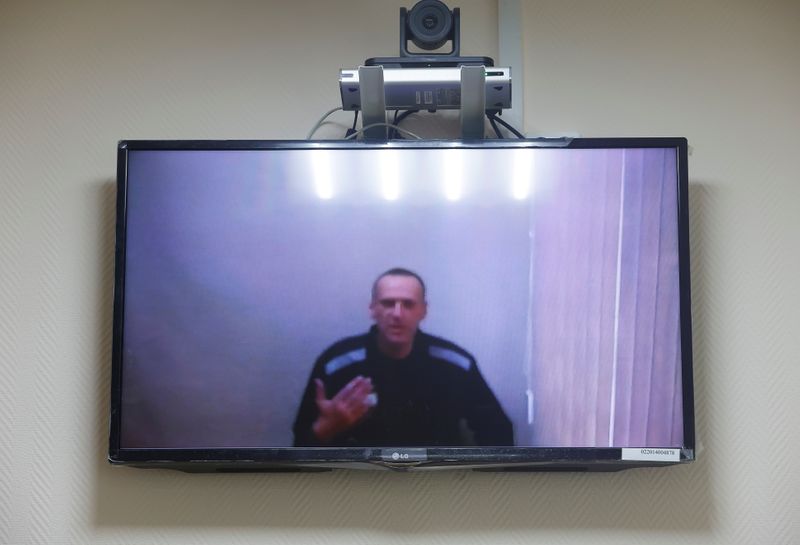 Russian opposition leader Alexei Navalny is seen on a screen via a video link during a hearing to consider his lawsuits against the penal colony over detention conditions there, at the Petushki district court in Petushki, Russia May 26, 2021. REUTERS/Maxim Shemetov

MOSCOW (Reuters) -Kremlin critic Alexei Navalny, speaking in a court appearance via videolink, on Wednesday accused the prison where is being held of censoring his newspapers by cutting out articles.

He also outlined several other complaints against the prison, including withholding a book and waking him up at night.

Navalny, an opponent of President Vladimir Putin, is serving a 2-1/2 year jail term for parole violations in what he says were trumped up charges. He went on hunger strike in late March to demand better medical care for acute leg and back pain.

He made a rare public appearance on Wednesday via a monitor in the courtroom to pursue two separate lawsuits. Dressed in full prison attire, he looked gaunt from weight loss but smiled as he appeared on the screen. He ended his hunger strike last month.

In lengthy, sarcastic remarks during the hearings he said that he subscribed to several newspapers.

“And imagine my surprise when I open the newspapers and see that whole articles have been cut out,” Navalny told the court.

“(My) correspondence is of course censored, I don’t mind the (prison) reading (my) letters. But why do they cut out articles from newspapers – no one can understand that,” he continued.

He told the court he would be prepared to drop the lawsuit if the prison promised to stop cutting out articles from the newspaper.

He also complained the prison had not given him a copy of the Koran, something he said he was legally entitled to as a religious work even though he was not Muslim.

He also accused the prison of waking him up in the night on the grounds of him being a flight risk, something he said was patently absurd and a reason he had lost seven kilograms in custody before even beginning his hunger strike.

The prison has said it is acting in accordance with Russian law.

Navalny has used numerous court appearances over the years to rail against the Russian political system and mock the courts as institutions that do the bidding of the Kremlin, something Russian authorities deny.