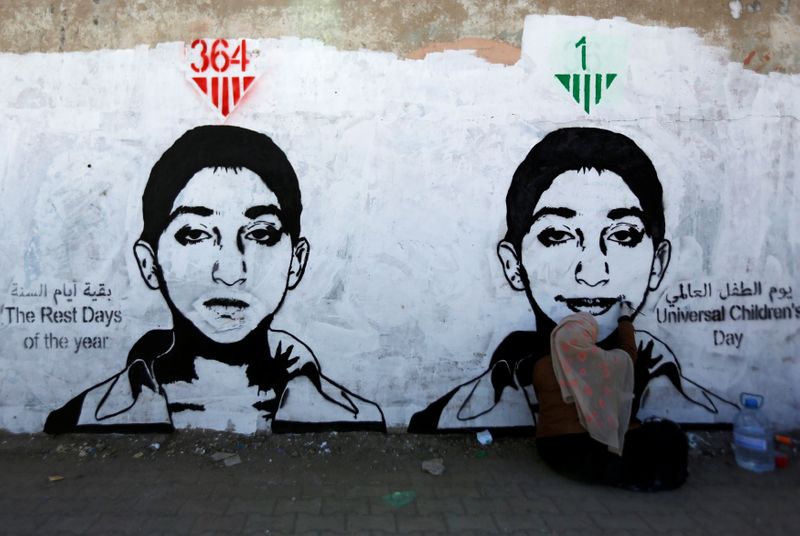 FILE PHOTO: Artist Haifa Subay paints a mural about children’s suffering in the time of war as part of the ‘Silent Victims’ campaign in Sanaa, Yemen November 20, 2017. REUTERS/Khaled Abdullah

GENEVA (Reuters) – Ten thousand Yemeni children have been killed or maimed since a military coalition led by Saudi Arabia intervened in March 2015 after the Iran-aligned Houthi group ousted the government, the United Nations children’s agency UNICEF said on Tuesday.

“The Yemen conflict has just hit another shameful milestone. We now have 10,000 children who have been killed or maimed since … March 2015,” UNICEF spokesperson James Elder told a U.N. briefing in Geneva after returning from a visit to Yemen.

“That is the equivalent of four children every single day,” Elder said, adding that many more child deaths or injuries went unreported.

Four out of every five children – a total of 11 million – need humanitarian assistance in Yemen, while 400,000 are suffering from acute malnutrition and more than 2 million are out of school, Elder said.

U.N.-led efforts to engineer a nationwide ceasefire have stalled as Saudi Arabia and the Houthis both resist compromise to end more than six years of a war that has caused what the U.N. calls the world’s largest humanitarian crisis.

Hundreds of Yemenis are trapped by fierce fighting between government and Houthi forces in the northern Marib governorate, residents and a local official said last week, after battles for control of the gas-rich region displaced some 10,000 people.