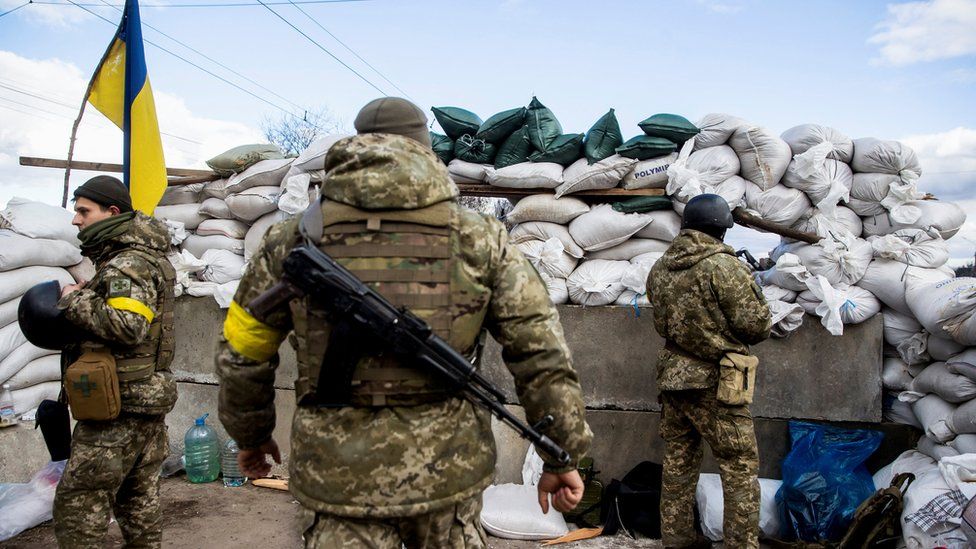 Cities across Ukraine remain on high alert as the country’s fight against Russia’s invasion enters a fifth day.

The Ukrainian military said on Monday Russian troops had made repeated attempts to storm the outskirts of the capital, but failed to capture it.

Officials have described Sunday’s fighting as “difficult” as Russian troops “continue[d] shelling in almost all directions”.

The major cities of Kyiv, Kharkiv and Chernihiv were also targeted overnight.

All three remain under Ukrainian forces’ control, but Russia made some progress in the south, taking the port town of Berdyansk.

The UK’s Ministry of Defence said its latest intelligence suggests that “the bulk” of Russia’s forces remain more than 30km (19 miles) north of Kyiv, “having been slowed by Ukrainian forces”.

Ukrainian President Volodymyr Zelensky has warned the next 24 hours will be “crucial”.

Talks are due to be held Monday on the border between Ukraine and Belarus. Mr Zelensky has said he does not have high hopes, but is attending because of “a small chance to end the war”. The talks are to be held without preconditions, Ukraine has said.

It comes a day after Russia’s President Vladimir Putin put its deterrence forces, which include nuclear weapons, on “special alert”. The announcement does not mean Russia intends to use the weapons, but was widely perceived as a threat.

UK Defence Secretary Ben Wallace told Sky News the move was to “remind the world that he has a deterrent” and distract people from “what’s going wrong in Ukraine”.

“We’re all talking about it. He is clearly wanting to get peoples’ attention distracted form what is going on on the ground.”

The UN General Assembly of 193 countries will also hold a rare emergency session on Monday to discuss the war, after the EU warned that more than seven million people could be displaced by the conflict.

Ukraine’s health ministry has said 352 civilians, including 14 children, have died so far. The UN has recorded 64 confirmed civilian deaths and many more wounded, and says it expects the true number to be much higher.

Russia’s currency, the rouble, slumped by 30% against the US dollar in early trading on Monday – a record low prompted by Western financial sanctions. Russia’s central bank more than doubled its interest rate – bringing it to 20% – in response.

Eerie calm in Kyiv, then sirens

In Ukraine’s capital Kyiv, there were a few hours of eerie calm before shelling and air raid sirens started again in the early hours of Monday, according to Ukraine’s state service of special communications.

Kyiv’s defence commander said Russian troops had tried to storm the capital’s outskirts overnight, but were rebuffed by Ukrainian forces.

He added that Russia had suffered “significant losses of personnel” and Russian military equipment was being destroyed. The BBC has not verified this independently.

Many residents spent another night sheltering underground as the city remained under strict curfew. The stay-at-home order is due to be lifted at 08:00 local time (06:00 GMT) on Monday morning, with shops expected to reopen.

Other key cities in the north faced an ongoing barrage, including Chernihiv which saw intense shelling overnight. Missiles hit a number of buildings, according to Ukraine’s state emergency service (SES).

They included a five-storey residential building, it said. The two lower floors caught fire, but the blaze has since been extinguished. No fatalities were reported.

US media reports suggest Belarus may soon follow its ally Russia into battle, with a troop deployment possible as soon as Monday according to the Washington Post and Associated Press news agency.

Belarus, which lies to the north of Ukraine, has acted as a springboard for Russian troops since the invasion began.

Its autocratic government voted on Sunday to renounce its non-nuclear status – paving the way for Russia to potentially stage nuclear weapons there.

On Sunday, President Zelensky said Belarus’s leader Alexander Lukashenko had pledged to him in a phone call that Belarussian troops would not be sent into Ukraine.