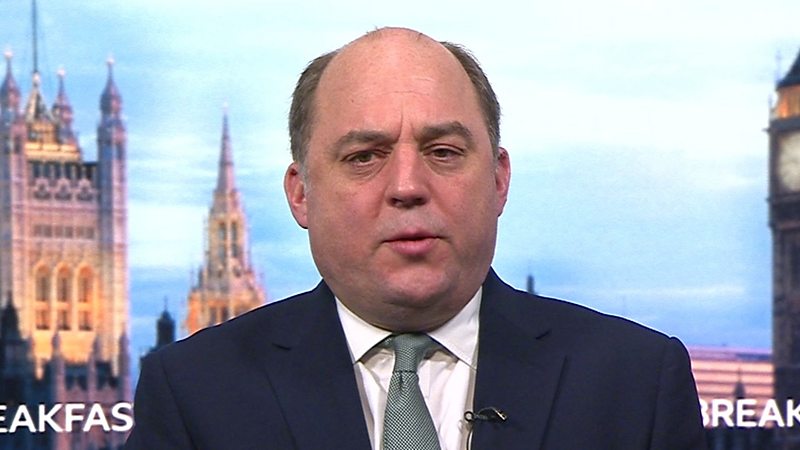 Mr Wallace said Mr Putin was engaged in a “battle of rhetoric” by trying to “remind the world” he had a deterrent.

He said Russia was behind schedule on its invasion of Ukraine and Ukrainians were putting up a “very strong fight”.

Mr Putin has said his order was due to aggression by the West and Nato.

His announcement does not mean Russia intends to use its nuclear weapons.

But it nevertheless attracted international condemnation, with the US branding it an “unacceptable escalation”.

The EU later unveiled an unprecedented new raft of further sanctions against Moscow, including banning all Russian aircraft from its airspace and barring state media outlets Sputnik and Russia Today from EU territory.

The EU said it would also fund the purchase and delivery of weapons to Ukraine.

Speaking to BBC Breakfast on Monday, Mr Wallace said he understood concerns over Mr Putin’s order, revealing his own 12-year-old son had called him about it.

He said: “We don’t see or recognise in the sort of phrase or the status he described as anything that is a change to what they have currently as their nuclear posture.

“This is predominantly about Putin putting it on the table just to remind people, remind the world, that he has a deterrent.”

The defence secretary said that Britain was also a nuclear power and that its deterrent had “kept our security for decades”.

The very public shift to high alert status is a way for Moscow to send a warning.

Moving to alert status probably makes it easier to launch weapons more quickly. But it does not mean there is a current intent to use them.

Russia has the largest stockpile of nuclear weapons in the world but also knows that Nato has enough to destroy Russia if they were used.

“President Putin will know that anything involving a nuclear weapon has an equal or greater response from the West,” Mr Wallace said.

“It does keep us safe and that’s why I would say to parents up and down this country we will not do anything to escalate in that area.

“We will not do anything to feed any miscalculation. We take it very, very seriously.

Mr Wallace said Moscow’s invasion of Ukraine was not going to plan, with “significant casualties” and protests against it in Russia

He said that as a result, Russia’s attack was likely to be become “more violent” and could see it “indiscriminately” bombing Ukrainian cities.

Russia’s military assault has entered its fifth day, with cities across Ukraine on high alert after the capital Kyiv and major centres of Kharkiv and Chernihiv were targeted by Russian forces overnight.

All three cities remain under Ukrainian control, but Russia made some progress in the south, taking the port town of Berdyansk.

The UK’s Ministry of Defence said its latest intelligence suggested “the bulk” of Russia’s forces remained more than 30km (19 miles) north of Kyiv, “having been slowed by Ukrainian forces”.

Ukrainian President Volodymyr Zelensky has warned the next 24 hours will be “crucial”.

Negotiators for Kyiv and Moscow are meeting for talks today on Ukraine’s border with Belarus.

Mr Zelensky said on Sunday that he did not expect a breakthrough from the talks but said he would attend because of the “small chance to end the war”.

After a phone call with Mr Zelensky at the weekend, Prime Minister Boris Johnson said things “are not going all the way of President Putin” and Ukrainians had been “fighting heroically” and with “great success” to repel Russian forces.