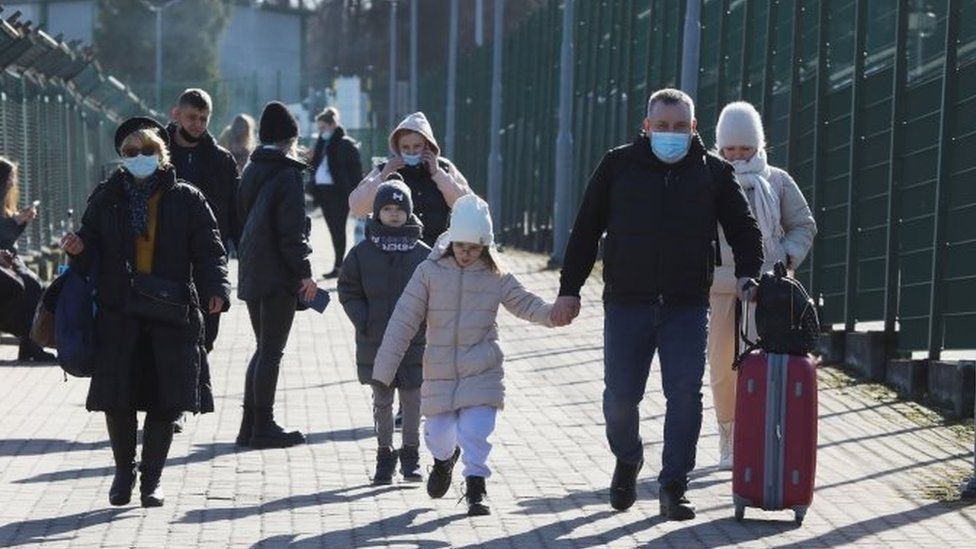 Major Western nations have reacted with outrage at Russia’s invasion of Ukraine, accusing it of bringing war back to Europe.

In eastern Europe, the fears extended to coping with a wave of refugees.

Other nations, including China, which bridled at the word invasion, were more muted. Some focused more on the safety of their citizens in Ukraine.

Ukraine says Russia is carrying out a full-scale attack from many directions, but the details of the assault and the number of casualties are not yet clear.

Russian President Vladimir Putin has spoken of a “special military operation” aimed at the demilitarisation and “denazification” of Ukraine, but his overall goals also remain unclear.

The uncertainty has not stopped an angry and defiant response from Western allies.

A largely united voice spoke out with condemnation and promises of sanctions.

Joe Biden said: “President Putin has chosen a premeditated war that will bring a catastrophic loss of life and human suffering.” He said the United States would meet with allies to hammer out economic punishment.

European Commission chief Ursula von der Leyen said Mr Putin was “responsible for bringing war back to Europe”. The sanctions would “weaken Russia’s economic base and its capacity to modernise”.

UK PM Boris Johnson said Mr Putin had “chosen a path of bloodshed and destruction” with an “unprovoked attack”.

German Chancellor Olaf Scholz said he stood by his allies in eastern Europe, saying Mr Putin would pay a “bitter price” for his “serious error”.

Calling for a speedy Nato summit, Emmanuel Macron expressed France’s solidarity with Ukraine. It was a view echoed by many, including Italian Prime Minister Mario Draghi, who called Russia’s attack “unjustified and unjustifiable”.

But there was also huge concern at what could happen next.

One German minister spoke of a “land war in Europe that we thought was only to find in history books”, while another, Interior Minister Nancy Faeser, said Germany would help neighbours if there was a “large-scale influx” of refugees.

That concern is also shared by Ukraine’s neighbours, but many were also scrambling to shore up their own security.

The president of Lithuania, a Nato member, said he was going to impose a state of emergency.

A similar decree has been issued by Moldova further south. Dozens of cars were reportedly queuing on the border with Ukraine, with Moldova saying it would accept tens of thousands of refugees.

Romania said it could take half a million.

Poland is setting up reception points for refugees. It told Russia to end its attacks and leave Ukraine alone.

Georgia – which fought Russia in 2008 over disputed regions – backed Ukraine, saying the Russian attack would have “dire consequences” for the international community.

Russia’s ally, Belarus, said it was not taking part in the military action, but would consider it if asked. Belarus has hosted Russian troops during the crisis, and they crossed from the country into Ukraine as part of the attack.

Ukraine has asked Nato member Turkey to close the Bosphorus and Dardanelles straits to Russian ships. Turkey has said it will consider the request and has backed Ukraine’s territorial integrity.

There has been a lot of interest in how China would respond. Its initial response was to call the word invasion a “typical Western media question method”, with the foreign ministry saying “we won’t go rushing to a conclusion”.

China and Russia now have a strategic partnership aimed at countering US influence, sealed when Mr Putin and President Xi Jinping met just before the Winter Olympics in Beijing.

China told its citizens in Ukraine to fly a Chinese flag to try to protect themselves.

‘Shakes the foundation’ – Other nations

India has assembled a control room and has concentrated on advising nationals to stay calm and how to leave the country.

South Korea and Japan condemned the attack, with the latter saying it “shakes the foundation of the international order”.

And Australia will expand those it has already enforced. There must be “a cost for this violent, unacceptable and egregious behaviour”, Prime Minister Scott Morrison said.

Iran called for a political solution, with its foreign minister blaming Nato provocations for the Ukraine crisis.