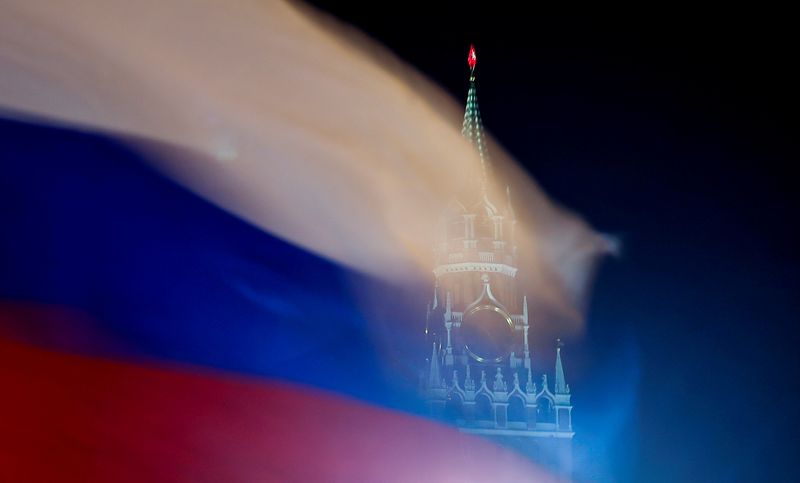 FILE PHOTO: A Russian flag flies with the Spasskaya Tower of the Kremlin in the background in Moscow, Russia, February 27, 2019. REUTERS/Maxim Shemetov

KYIV (Reuters) – Russia’s domestic intelligence service was accused by its Ukrainian counterpart on Monday of waging information warfare after it said it had arrested 106 supporters of a Ukrainian neo-Nazi youth group for planning attacks and mass murders.

The incident came at a moment of acute tension between the two countries, with Ukraine saying it fears a possible Russian invasion and Moscow denying it has any such plan.

Russia’s Federal Security Service (FSB) said it had made arrests in 37 of Russia’s more than 80 regions and that two of those held had planned attacks on educational institutions.

An FSB statement identified the alleged group as the MKU, which state television said stood for the words “Maniacs. Cult of Murder”. The FSB said the group was set up by a Ukrainian under the patronage of Ukraine’s intelligence services.

Ukraine’s SBU security service said: “The current statements of the FSB are part of a coordinated information operation which should only be viewed through the prism of hybrid warfare.”

It said in a written comment to Reuters that the FSB was playing to a Russian domestic audience and trying to discredit it.

Russia has aimed a barrage of hostile rhetoric at Kyiv in recent weeks as Ukraine, the United States and Western capitals have raised fears over a Russian troop buildup near Ukraine and the possibility of an invasion.

Moscow has denied planning an attack and blamed Ukraine and NATO for stoking tensions, demanding assurances from the U.S.-led alliance that it will not grant membership to Kyiv.

Washington has said it believes Russia may be planning to use alleged “provocations” by Ukraine to justify military aggression.

Mutual recriminations between Russia and Ukraine have been rising for weeks. Ukraine last month accused Russia of being behind an alleged coup plot against President Volodymyr Zelenskiy, which the Kremlin denied.

Russia said on Dec. 2 it had arrested three suspected Ukrainian intelligence agents, including one accused of planning to carry out an attack using two homemade bombs, allegations that Kyiv dismissed as trumped up.