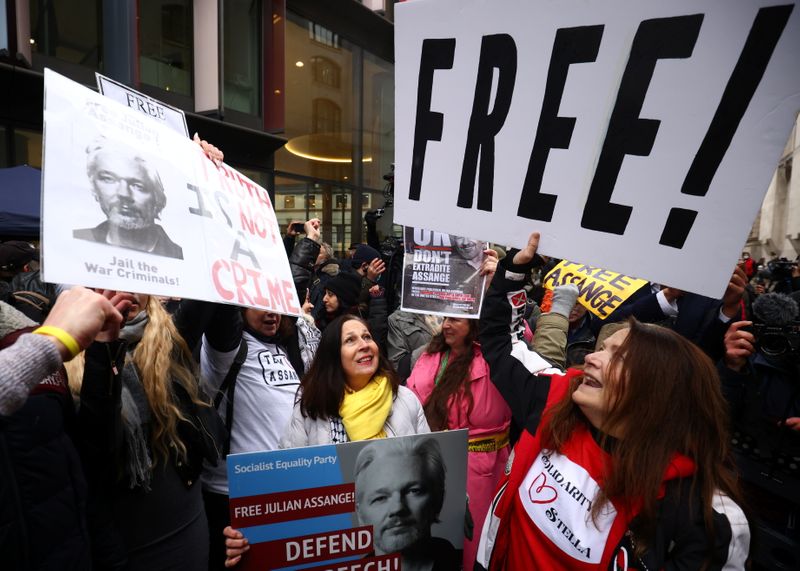 People celebrate after a judge ruled that WikiLeaks founder Julian Assange should not be extradited to the United States, outside the Old Bailey, the Central Criminal Court, in London, Britain, January 4, 2021. REUTERS/Henry Nicholls

LONDON (Reuters) – A British judge ruled on Monday that WikiLeaks founder Julian Assange should not be extradited to the United States to face criminal charges including breaking a spying law, saying his mental health problems meant he would be at risk of suicide.

The United States said it would continue to seek the extradition of Australian-born Assange and U.S. prosecutors are set to appeal Monday’s decision to London’s High Court.

The U.S. authorities accuse the 49-year-old of 18 offences relating to the release by WikiLeaks of vast troves of confidential U.S. military records and diplomatic cables which they say put lives in danger.

Assange’s lawyers will seek bail on Wednesday for their client, who has spent most of the last decade either in prison or self-imposed confinement.

“We will continue to seek Mr. Assange’s extradition,” a U.S. Department of Justice statement said, adding that the United States had won on all the legal points, including arguments relating to freedom of speech and political motivation.

Assange’s legal team had argued the entire prosecution was brought on by pressure from U.S. President Donald Trump’s administration, and that Assange’s extradition would pose a severe threat to press freedom.

But it was only the real risk he would commit suicide if he were held in a U.S. maximum security jail that led Judge Vanessa Baraitser to reject the extradition request.

Assange, she said, suffered at times from severe depression and had been diagnosed with autism. Half a razor blade was found in his London prison cell in May 2019, and he had told medical staff of suicidal thoughts and made plans to end his life.

“I find that Mr Assange’s risk of committing suicide, if an extradition order were to be made, to be substantial,” Baraitser said in her ruling, delivered at London’s Old Bailey court.

“The overall impression is of a depressed and sometimes despairing man, who is genuinely fearful about his future.”

She said Assange had made regular calls from jail to the Samaritans charity.

Wearing a navy suit and a mask, Assange showed little emotion at the ruling. Outside court, his partner Stella Moris, with whom he had two children while seeking asylum in London’s Ecuadorean Embassy, said the decision was a victory but the threat of extradition was still hanging over him.

“I call on the president of the United States to end this now: Mr President, tear down these prison walls, let our little boys have their father. Free Julian, free the press, free us all,” she said.

U.S. prosecutors and Western security officials regard the WikiLeaks founder as a reckless and dangerous enemy of the state whose actions imperilled the lives of agents whose names were in the leaked material.

The U.S. authorities say more than 100 people were put at risk by the disclosures and about 50 had received assistance, with some fleeing their home countries with their spouses and families to move to the United States or another safe country.

Supporters regard him as an anti-establishment hero who has been victimised because he exposed U.S. wrongdoing in wars in Afghanistan and Iraq, and say his prosecution is a politically motivated assault on journalism and free speech.

“Assange is a journalist and deserves a chance, I am in favor of pardoning him,” he said. “We’ll give him protection.”

WikiLeaks came to prominence when it published a U.S. military video in 2010 showing a 2007 attack by Apache helicopters in Baghdad that killed a dozen people, including two Reuters news staff. It then released thousands of secret classified files and diplomatic cables.

The legal saga began soon afterwards when Sweden sought Assange’s extradition from Britain over allegations of sex crimes. When he lost that case in 2012, he fled to the Ecuadorean embassy in London, where he spent seven years.

When he was finally dragged out in April 2019, he was jailed for breaching British bail conditions although the Swedish case against him had been dropped. Last June, the U.S. Justice Department formally asked Britain to extradite him.

Baraitser rejected his lawyers’ arguments that the case was political and an assault on journalism and freedom of speech, saying there was insufficient evidence that prosecutors had been pressured by Trump’s team and little evidence of hostility from the U.S. president.

She said there was no evidence that Assange would not get a fair trial in the United States and that his actions had gone beyond investigative journalism.

But she said there was a real risk that, if found guilty, he would be held in the ADX Florence maximum security prison (SAM) in almost total isolation, and that he would find a way around their suicide prevention measures.

“I am satisfied that, if he is subjected to the extreme conditions of SAMs, Mr. Assange’s mental health will deteriorate to the point where he will commit suicide,” Baraitser said.