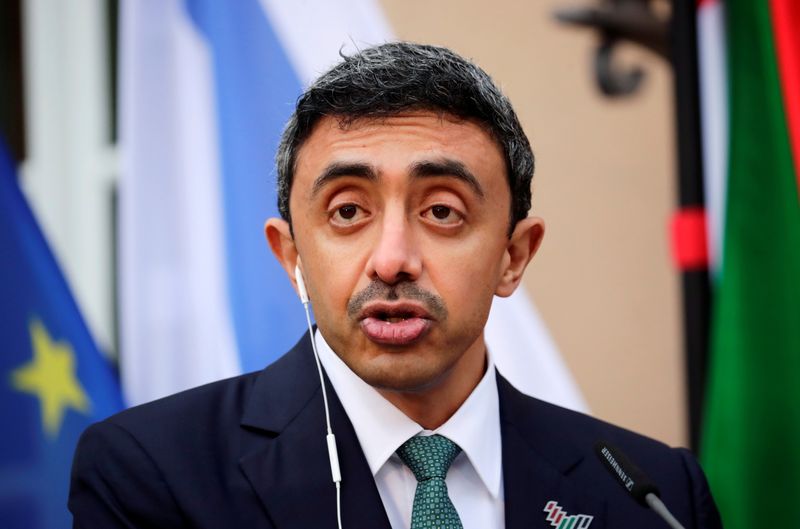 BEIRUT (Reuters) -The United Arab Emirates foreign minister met President Bashar al-Assad in Damascus on Tuesday, a sign of improving ties between Assad and a U.S.-allied Arab state that once supported rebels trying to overthrow him.

Foreign Minister Sheikh Abdullah bin Zayed is the most senior Emirati dignitary to visit Syria in the decade since the eruption of a civil war in which several Arab states backed mainly Sunni Muslim insurgents against Assad.

Washington, which opposes efforts to normalise ties with Assad or rehabilitate him until progress is made towards a political solution to the conflict, said it was concerned about the move by its ally the UAE.

The foreign minister led a delegation of senior Emirati officials that discussed bilateral relations and cooperation in a meeting with Syrian counterparts, a statement by the Syrian presidency said.

The participants discussed exploring “new horizons for this cooperation, especially in vital sectors in order to strengthen investment partnerships in these sectors”, the statement said.

He also stressed the “UAE’s support for all efforts made to end the Syrian crisis, consolidate stability in the country, and meet the aspirations of the brotherly Syrian people,” WAM reported.

UAE senior official Anwar Gargash, diplomatic adviser to the Emirates president, wrote on Twitter that “the UAE continues to build bridges, boost relationships, and connect what was cut off… and will be keen to spare the region further congestion and continuous conflicts.”

A correspondent for Lebanon’s al-Manar TV, which is run by Lebanon’s Hezbollah, an Assad ally, said heavy security had been observed on the road from Damascus airport to the city.

The UAE has been at the forefront of efforts by some Arab states to normalise ties with Damascus https://www.reuters.com/world/middle-east/arabs-ease-assads-isolation-us-looks-elsewhere-2021-10-10, and earlier this year called for Syria to be readmitted to the Arab League. It reopened its embassy in Damascus three years ago.

Jordan and Egypt, both U.S. allies, have also taken steps toward normalising relations since Assad, with Russian and Iranian help, defeated rebels across much of Syria, apart from some northern and eastern areas that remain outside his grasp.

U.S. State Department spokesperson Ned Price said Washington was concerned by the meeting “and the signal it sends,” and had told the UAE that it will not “support efforts to normalize or to rehabilitate Bashar al-Assad, who is a brutal dictator.”

“We urge states in the region to carefully consider the atrocities that this regime, that Bashar al-Assad himself has perpetrated on the Syrian people over the last decade, as well as the regime’s ongoing efforts to deny much of the country access to humanitarian aid and security,” Price said.

Washington has also said it will not lift sanctions, including measures that can freeze the assets of anyone dealing with Syria, regardless of nationality.

The UAE may have asked Damascus not to trumpet the visit due to sensitivities in its ties to the United States, said Joshua Landis, a Syria specialist at the University of Oklahoma. “No one wants to get their head too far over the parapet,” he said.

Last month, King Abdullah of Jordan spoke to Assad for the first time in a decade, and the border between the countries was reopened for trade. The Egyptian foreign minister also met his Syrian counterpart in September, the highest level contact between the countries since the civil war began.

“Both the UAE and Egypt have long believed that the Damascus government serves as a break on the spread of Islamist groups in the region,” Landis said. Investment is expected once Syria is readmitted to the Arab League, he added, though private firms would wait to see how the United States would respond first.