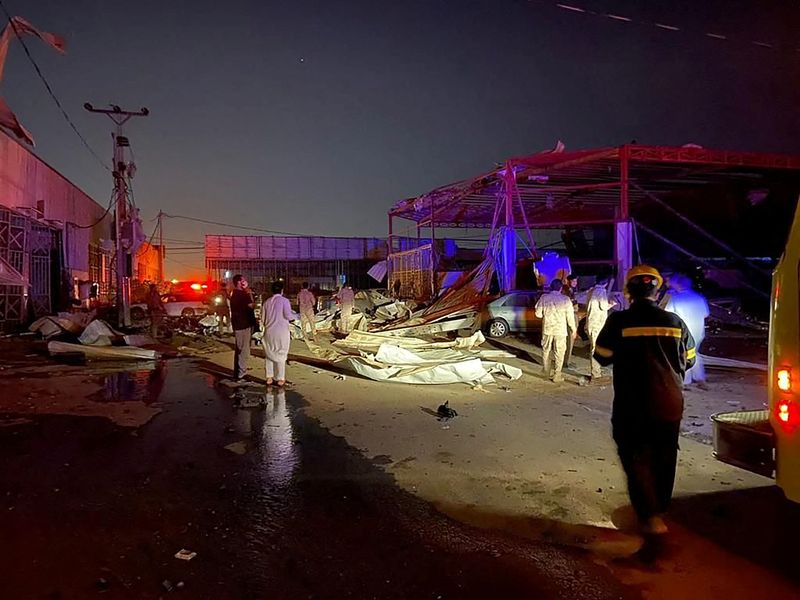 FILE PHOTO: Residents and civil defence officials stand near cars and buildings damaged by shrapnel from the intercepted ballistic missile that landed in an industrial area, in south of Dhahran, Saudi Arabia, January 24, 2022. Saudi Press Agency/Handout via REUTERS

The Emirati envoy to the United Nations, Lana Nusseibeh, told CNN on Tuesday that UAE intelligence showed the two assaults – the first on the regional commercial and tourism hub – had originated from Yemen, and there was also a need to stem illicit flows of weapons and funds to the group.

A Saudi-led military coalition, which includes the UAE, accuses Iran of supplying the Houthis with arms, which both Tehran and the group deny.

Monday’s strike, aimed at a base in Abu Dhabi hosting U.S. forces, was thwarted by American-built Patriot interceptors, after a deadly attack a week earlier on the capital.

“Our ability to intercept and deflect these attacks is world class,” she said. “There can always be upgrades and improvements and… additional intelligence cooperation and I think these are the fields we’re looking at with our (U.S.) partners.”

She said the UAE, which has urged Washington to reinstate a terrorist designation https://www.reuters.com/world/middle-east/us-yemen-envoy-lenderking-visit-gulf-london-state-department-2022-01-19 of the Houthis, was also discussing with partners increasing pressure on the group to engage with stalled U.N.-led peace efforts.

“That means listing them again on sanctions regimes … potentially listing additional figures, it means stopping the illicit flow of weapons and finance to them.”

The Houthis said they are punishing the UAE for backing https://www.reuters.com/world/middle-east/uae-backed-forces-press-yemens-marib-despite-houthi-warnings-2022-01-25 forces battling the group in energy-producing regions, after the UAE in 2019 largely distanced itself from Yemen.

The Houthis have repeatedly launched attacks on Saudi Arabia in the war, seen as a proxy conflict between Riyadh and Tehran.

Nusseibeh said the Houthis would not succeed in undermining the UAE’s safe-haven status.

The UAE, which has been engaging with Iran, would continue diplomacy aimed at de-escalation, she said, while reserving the right to defend itself “defensively and offensively” in the Yemen conflict.