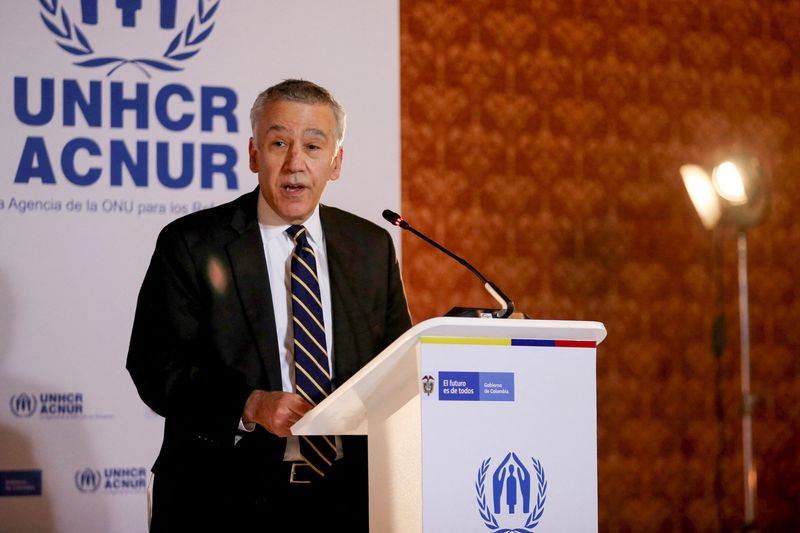 FILE PHOTO: U.S. Ambassador to Colombia Philip Goldberg speaks during the announcement of the granting of legal status of temporary protection to Venezuelan migrants, in Bogota, Colombia February 8, 2021. REUTERS/Luisa Gonzalez

Philip Goldberg, serving since 2019 as ambassador to Colombia, will be nominated to the post in Seoul, the source said, speaking on condition on anonymity.

The Chosun Ilbo newspaper, citing multiple unnamed diplomatic sources, reported that the United States has asked for Seoul’s agreement after deciding to nominate Goldberg late last year and that an official announcement was imminent.

A spokesman for the U.S. Embassy in Seoul said they had no announcements to make at this time, and that any formal notification would come from the White House.

South Korea’s foreign ministry said it could not confirm the reports.

Goldberg, who recently served as ambassador to the Philippines and Bolivia, among other posts, also worked as coordinator for the implementation of United Nations sanctions on North Korea from 2009 to 2010.

While Seoul and Washington insist their alliance is “iron-clad,” the sanctions have been a source of controversy as they blocked South Korea’s plans for more economic engagement with the North.

The post in one of the United States’ key allies has been filled by a charge d’affaires ad interim for more than a year since the last ambassador to South Korea, former navy admiral Harry Harris, stepped down as Biden took office in January 2021.

Harris’ tenure was marked by tension in the alliance as then-President Donald Trump pressed Seoul to pay billions of dollars more toward supporting the roughly 28,500 U.S. troops stationed there, while South Korea chafed https://www.reuters.com/article/us-southkorea-usa-idUSKBN1ZF0RT at the United State’s push for strict sanctions enforcement.