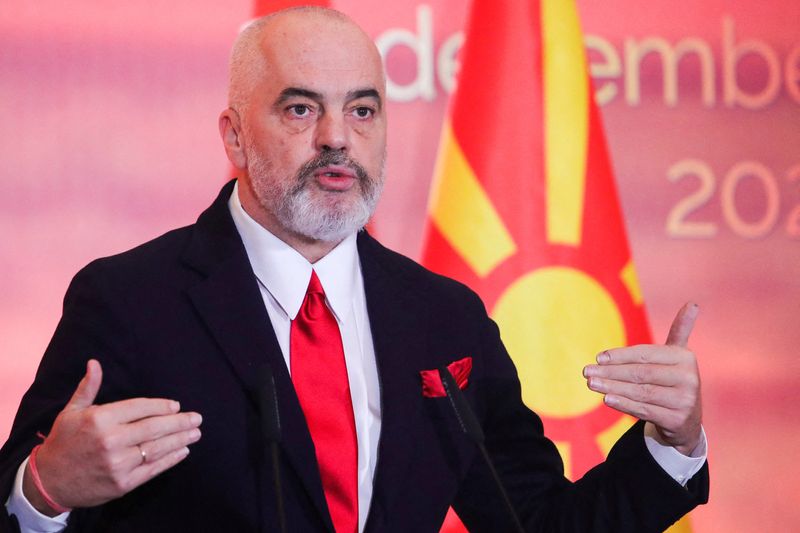 Albania’s Prime Minister Edi Rama delivers his speech during a press conference of the Open Balkan summit at the Palace of Brigades in Tirana, Albania December 21, 2021. REUTERS/Florion Goga

SOCEUR, based in Stuttgart, Germany, said on its website that the base in Albania would provide increased coordination with Albanian allies, important access to transportation hubs in the Balkans and greater logistical flexibility.

“This is a fantastic news … it is an expression of a very high credibility and a very close cooperation,” Rama said in a video message in which he read out the SOCEUR announcement.

Albania became a member of the NATO military alliance in 2009.

Highly trained and equipped with advanced communications equipment and weapons, special forces are often used in counterterrorism or reconnaissance operations. They can infiltrate enemy lines to tie down much larger numbers of opposition troops.

It was not clear what the role of these U.S. forces in Albania would be.

SOCEUR said its role is to “rapidly respond to emerging threats and if necessary, defeat aggression” together with its allies.

In the decade after the Sept. 11, 2001, attacks U.S. special forces numbers more than doubled, their budget tripled and their deployments quadrupled.

The United States already has 600 troops based in Serbia’s former province of Kosovo to maintain the fragile peace more than two decades after the end of the Kosovo War in 1999.