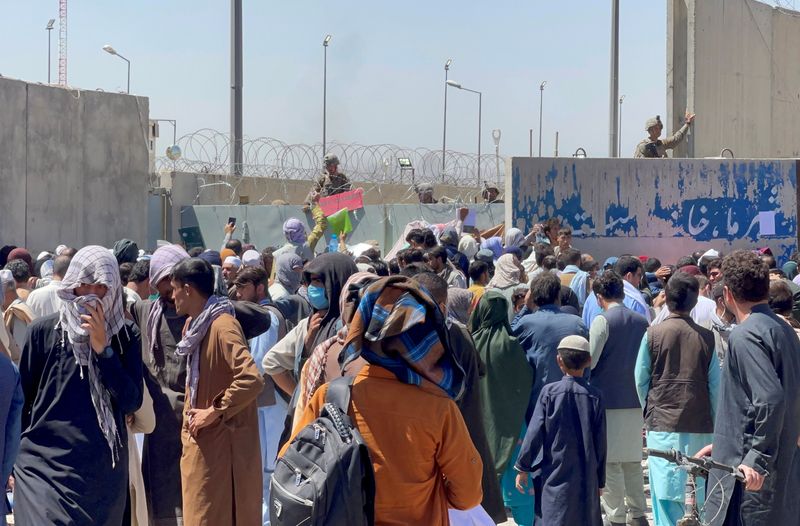 Crowds of people show their documents to U.S. troops outside the airport in Kabul, Afghanistan August 26, 2021. REUTERS/Stringer

WASHINGTON (Reuters) – The United States is taking steps to allow humanitarian work to continue in Afghanistan after the Taliban, blacklisted by Washington, captured Kabul earlier this month.

A U.S. Treasury Department official said President Joe Biden’s administration has been in touch with humanitarian partners in Afghanistan in recent days about their ability to continue humanitarian work despite U.S. sanctions on the Taliban.

“We are taking steps to allow for humanitarian aid to continue in a way that benefits the Afghan people,” the official said, adding that Biden discussed continuing humanitarian assistance with fellow G7 leaders on Wednesday.

The Taliban are designated as a terrorist group by the United States. The sanctions freeze any U.S. assets of the group and bars Americans from dealing with them, including the contribution of funds, goods or services.

While U.S. sanctions frequently allow for humanitarian exemptions, critics say heavy sanctions regimes such as those imposed on Iran and Venezuela can deter humanitarian organizations from working in the country out of fear of running afoul of Washington.

The Taliban captured Kabul on Aug. 15, capping a lightning advance across the country as American and allied troops withdrew.

Biden ordered all troops out of Afghanistan by the end of the month to comply with a withdrawal agreement with the Taliban, despite European allies saying they needed more time.

The Taliban’s 1996-2001 rule was marked by public executions and the curtailment of basic freedoms. Women were barred from school or work. The group was overthrown two decades ago by U.S.-led forces for hosting the al Qaeda militants who masterminded the Sept. 11, 2001, attacks on the United States.

The Taliban have said they will respect human rights and will not allow terrorists to operate from the country.