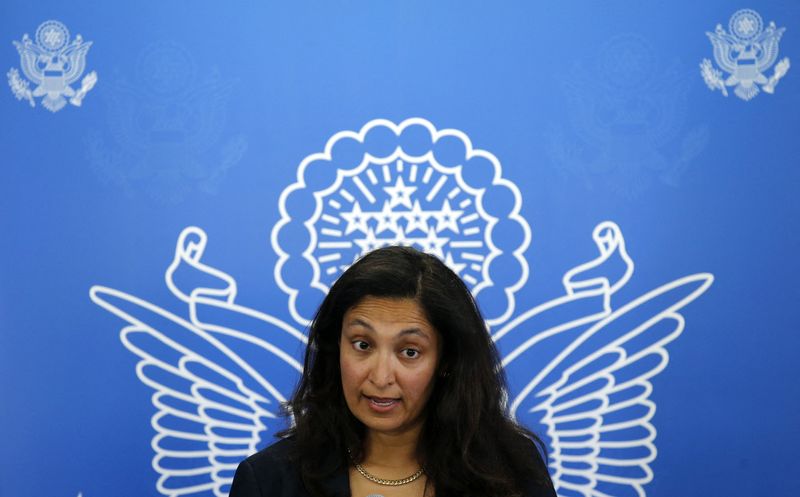 By David Brunnstrom and Kanishka Singh

WASHINGTON (Reuters) -The United States on Monday named Under Secretary of State Uzra Zeya as special coordinator for Tibet, drawing warnings from China to stay out of its internal affairs.

U.S. Secretary of State Antony Blinken said Zeya, who is responsible for democracy and human rights, would lead U.S. efforts to preserve the Chinese-ruled territory’s religious, cultural, and linguistic heritage in the face of human rights abuses by Beijing.

Beijing has consistently refused to deal with a U.S. coordinator on Tibet and denounced the move as political manipulation.

“China firmly rejects this, and we will never recognize this designation. We urge the U.S. to take concrete actions to abide by its commitment of recognising Tibet as part of China and not supporting Tibet’s independence, and stop using Tibetan-related issues to interfere in China’s domestic affairs.”

“She will lead U.S. efforts to preserve the religious, cultural, and linguistic heritage of Tibetans who are facing human rights abuses and challenges to their livelihoods and environment,” Blinken said in a tweet.

U.S.-China relations have been at their lowest point in decades over a range of issues, including trade, Taiwan, Hong Kong, human rights, the South China Sea and the coronavirus.

China seized control of Tibet after its troops entered the region in 1950 in what it calls a “peaceful liberation”. Tibet has since become one of the most restricted areas in the country. Critics, led by the Dalai Lama, say Beijing’s rule amounts to “cultural genocide”.

The International Campaign for Tibet advocacy group welcomed Zeya’s new role and in an emailed statement its interim president, Bhuchung Tsering, urged Zeya to take the lead in gathering support from like-minded countries to formulate a common approach on Tibet, as mandated by the Tibetan Policy and Support Act passed in the United States last year.

(Reporting by Kanishka Singh in Bengaluru, David Brunnstrom in Washington and Emily Chow in Beijing; Editing by Howard Goller and Nick Macfie)