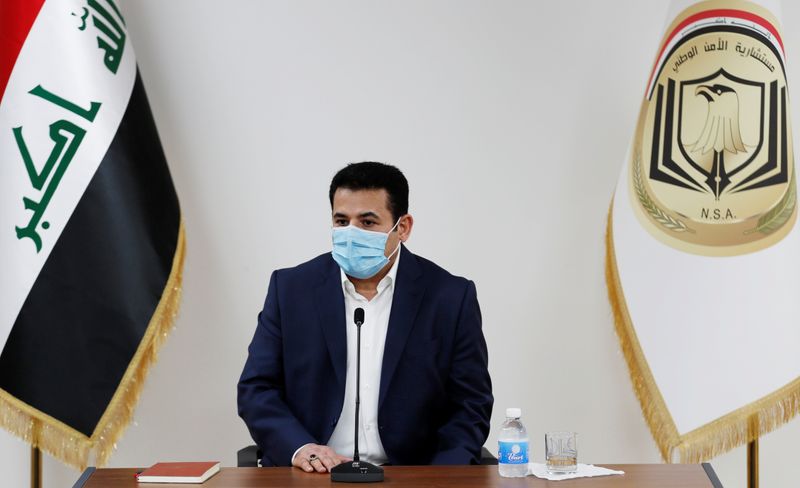 FILE PHOTO: Iraq’s National Security Advisor Qasim al-Araji wearing a protective mask speaks after he took up the post from the former security advisor Falih al-Fayyadh, during a meeting with employees of the advisers in Baghdad, Iraq July 14, 2020. REUTERS/Thaier al-Sudani

BAGHDAD (Reuters) -U.S.-led forces have ended their combat mission in Iraq, a move that transfers all remaining troops into a training and advising role, Iraqi military commanders and officials from the coalition led by the United States said on Thursday.

Western security officials and diplomats say privately that this will make little difference to the number of troops stationed in the country – currently more than 2,000 – since those forces have had limited involvement in any combat operations for the last couple of years.

The U.S.-led coalition began its mission in 2014 to defeat Islamic State, after the militants took over vast areas of Iraq and neighbouring Syria.

Since the group’s military defeat in 2017, Islamic State fighters have been unable to hold territory but are waging a continued low-level insurgency that regularly kills Iraqi soldiers and civilians in remote mountain and desert areas.

The coalition has also come under dozens of rocket and drone attacks by Iran-backed Shi’ite militias that helped defeat the Sunni extremist Islamic State and which say there is no longer a justification for Western forces to be in Iraq.

“As we complete our combat role, we will remain here to advise, assist, and enable the ISF (Iraqi security forces), at the invitation of Republic of Iraq,” coalition commander Major General John W. Brennan, Jr. said in a statement.

“Today, we renew our partnership with the Coalition, who are now serving in a new capacity – with a mission to advise, assist, and enable our brave military warriors,” he said.

U.S. President Joe Biden and Iraqi Prime Minister Mustafa al-Kadhimi sealed an agreement in July to formally end the U.S. combat mission in Iraq by the end of 2021.

Iraqi Shi’ite militants have vowed to wage new attacks against coalition forces in 2022.

Western security and diplomatic officials say that calling the shift a withdrawal, as it has sometimes been characterized by the Iraqi government, is misleading because it changes little in terms of the number of forces based in Iraq.

The U.S. has kept around 2,500 troops in Iraq since 2020. The Western officials say that most of those forces have been operating only in a training and advising role for some time.