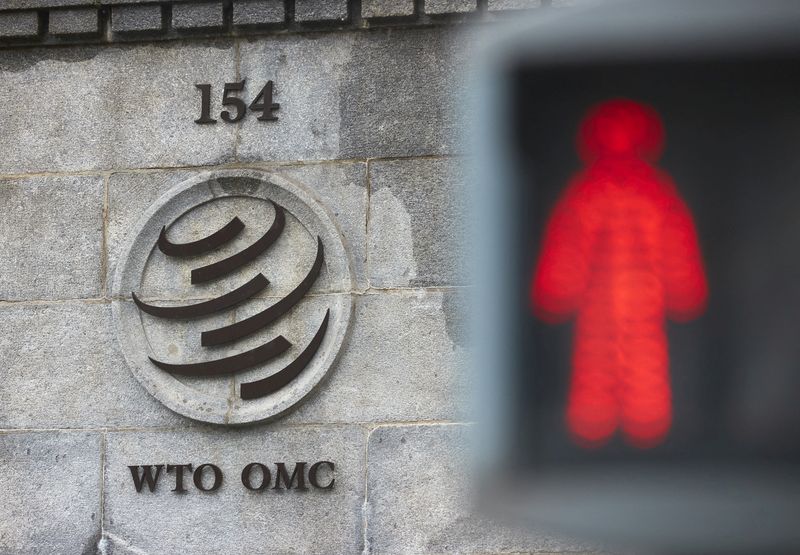 FILE PHOTO: A logo is pictured on the World Trade Organisation (WTO) building before a ministerial meeting to discuss a draft agreement on curbing subsidies for the fisheries industry in Geneva, Switzerland, July 15, 2021. REUTERS/Denis Balibouse/File Photo

GENEVA (Reuters) – The United States and the European Union have downgraded their dispute at the World Trade Organization over steel and aluminium tariffs applied by former U.S. President Donald Trump in 2018 and subsequent EU retaliation, documents filed at the WTO show.

The two sides agreed in October https://www.reuters.com/business/aerospace-defense/eu-us-end-clash-over-steel-aluminium-tariffs-work-global-deal-2021-10-31 to suspend their tariffs and work on a deal to combat “dirty” production and overcapacity in the industry in the next two years, with China clearly the focus of their attention.

Each agreed then to pause the WTO panels deliberating over the Trump tariffs and the subsequent EU counter-measures, which took the form of tariffs on a range of U.S. products including whisky, power boats and Harley Davidson motorbikes.

Documents filed with the WTO on Friday show that Washington and Brussels have now decided to terminate panel proceedings and move to a more informal and seldom used route of arbitration.

The two sides aim to agree on arbitrators, which could include members of the existing WTO panel, and then immediately and indefinitely suspend their work. In any case, they would not start work before Nov. 1.

Parties to arbitration can set their own rules and procedures and define the issues in dispute, but they have to agree that the decision of the arbitrators is final.