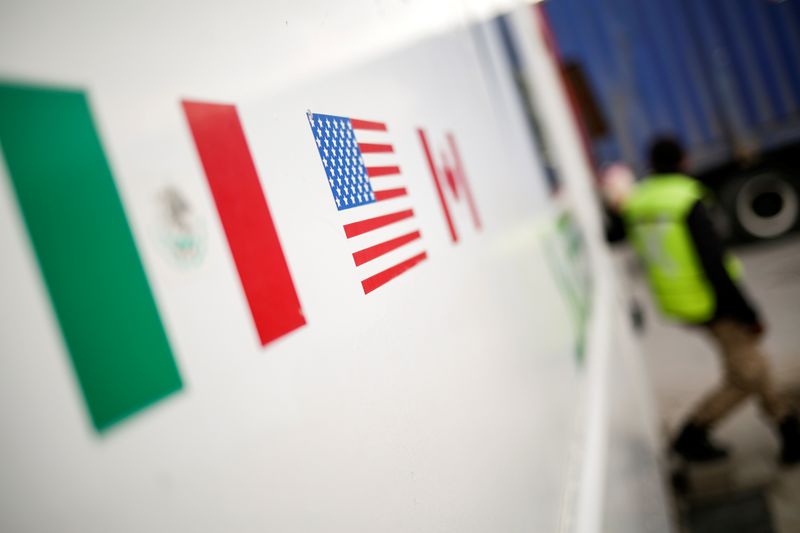 By Trevor Hunnicutt and Steve Scherer

WASHINGTON (Reuters) – Leaders of the United States, Canada and Mexico are set to agree to new methane curbs and COVID-19 vaccine donations when they meet for the first time in five years on Thursday, according to senior Biden administration officials.

The U.S. officials expect the three North American countries to agree to cut methane emissions in their oil-and-gas sectors by 60% to 75% by 2030, as the countries work to curb https://www.reuters.com/business/environment/nearly-90-countries-join-pact-slash-planet-warming-methane-emissions-2021-11-02 the potent greenhouse gas.

Canada and Mexico will also announce they are donating millions of doses of the vaccines – initially loaned to them by the United States – to other countries, one of the officials who declined to be named said.

The deals are part of an effort by President Joe Biden to revive the so-called Three Amigos, a working group ditched by his predecessor Donald Trump.

Washington wants to shore up alliances with countries to help reorient the economy to a lighter carbon footprint, fight the pandemic, ease immigration pressures and compete with China.

“The most important thing about this summit is that we update a vision of North America’s future,” said Mexican Foreign Minister Marcelo Ebrard.

Yet tensions with Ottawa and Mexico City over the auto industry, ‘Buy American’ policies and a Mexican energy bill could weigh on the White House-hosted talks formally known as the North American Leaders’ Summit.

The leaders are set to commit to prohibiting the import of goods made with forced labor, a policy the administration has been aiming at China https://www.reuters.com/world/china/exclusive-biden-will-push-allies-act-china-forced-labor-g7-adviser-2021-04-24. Activists and Western politicians accuse China of using forced labor in its northwestern Xinjiang province, an allegation Beijing denies.

Biden is eager to shore up a key political issue: supply chains battered by the pandemic and contributing to product shortages and inflation. Biden aides want to move the country away from dependence on raw materials and products from China, which they regard as the country’s main compeitor.

As part of the meetings with Mexican President Andres Manuel Lopez Obrador and Canadian Prime Minister Justin Trudeau, the U.S. president is expected to launch a North American supply chain working group to address concerns including where to obtain the critical minerals needed to make America a powerhouse in developing electic vehicles (EVs).

Canada and Mexico are worried about Biden’s ‘Buy American’ provisions and a proposed electric-vehicle tax credit that would favor unionized, U.S.-based manufacturers.

“Job one here in the U.S. this week, is first of all, to really make our American counterparts aware of the extent to which their current approach to this issue is a problem for Canada,” said Chrystia Freeland, Canada’s Deputy Prime Minister.

The United States is Mexico’s and Canada’s top trade partner, and cars and trucks are the most-traded manufactured product between the three. Canada and Mexico want a level playing field as they compete to lure companies to set up plants for the EV supply chain.

Besides EV tax credits, Trudeau is likely to bring up Enbridge Inc’s Line 5 oil pipeline https://www.reuters.com/business/energy/canadian-lawmakers-call-action-us-canadian-leaders-pipeline-dispute-2021-04-15, which the state of Michigan wants to close on environmental grounds. Canada invoked a 1977 pipeline treaty to trigger bilateral negotiations over the issue.

“Because Canada has invoked the treaty there’s a limit to what we can actually discuss,” said one of the U.S. officials but added Biden is “prepared to discuss anything” raised by Trudeau.

Lopez Obrador said on Wednesday he would explain the plan to Biden and Trudeau if it came up, adding that past governments rigged the market in favor of private interests.

“It’s very simple,” he told a news conference. “We want to keep electricity prices from increasing, and to end abuses by private companies, especially foreign companies.”

But the legislation has drawn fire from the U.S. government and business groups concerned the rule may not be compliant with Mexico’s trade obligations.

On immigration, U.S. officials said they want to focus not on issues at the 1,960 mile (3,155 km) U.S.-Mexico border but on “root causes” driving people away from other countries in Latin America and the Caribbean.