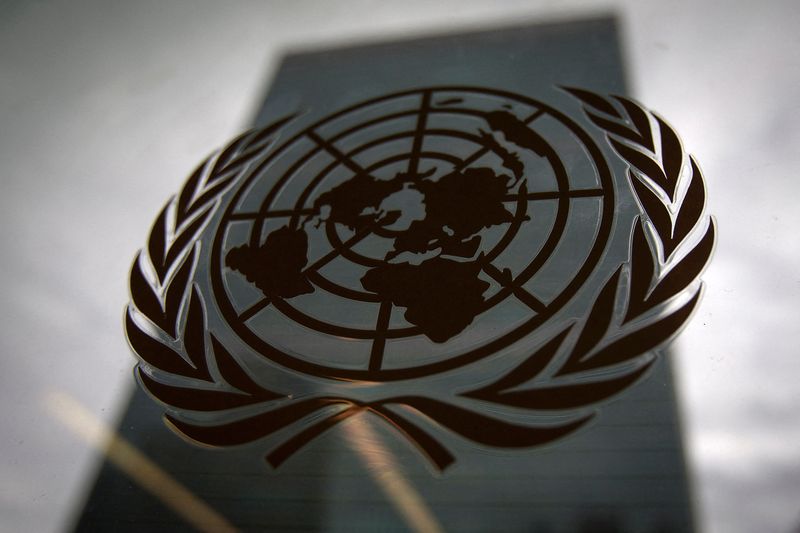 FILE PHOTO: The United Nations headquarters building is pictured though a window with the UN logo in the foreground in the Manhattan borough of New York August 15, 2014. REUTERS/Carlo Allegri

UNITED NATIONS (Reuters) – The United Nations General Assembly on Thursday agreed on a definition of denial of the Holocaust, when the Nazis killed 6 million Jews during World War Two, and urged social media companies “to take active measures” to combat antisemitism.

“The General Assembly is sending a strong and unambiguous message against the denial or the distortion of these historical facts,” said Germany’s U.N. Ambassador Antje Leendertse. “Ignoring historical facts increases the risk that they will be repeated.”

While the 193-member General Assembly adopted the resolution – drafted by Israel and Germany – without a vote, Iran disassociated itself from the text over Israel’s “occupation of Palestine and parts of Syria and Lebanon.”

Israel’s U.N. mission did not immediately respond to a request for comment on Iran’s statement.

The General Assembly resolution spelled out that distortion and denial of the Holocaust refers to:

* Intentional efforts to excuse or minimize the impact of the Holocaust or its principal elements, including collaborators and allies of Nazi Germany.

* Gross minimization of the number of the victims of the Holocaust in contradiction to reliable sources.

* Attempts to blame the Jews for causing their own genocide.

* Statements that cast the Holocaust as a positive historical event.

* Attempts to blur the responsibility for the establishment of concentration and death camps devised and operated by Nazi Germany by putting blame on other nations or ethnic groups.

It “urges member states and social media companies to take active measures to combat antisemitism and Holocaust denial or distortion by means of information and communications technologies and to facilitate reporting of such content.”

The General Assembly meeting on Thursday coincided with the 80th anniversary of the Wannsee Conference, when the Nazis met to coordinate the “final solution” – their plan to exterminate the Jews.