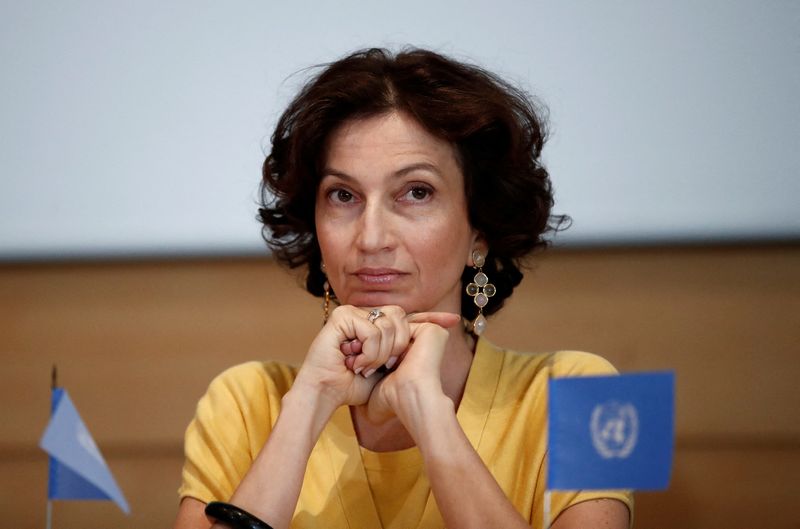 FILE PHOTO: Audrey Azoulay, Director-General of UNESCO, attends a news conference on the launching of a landmark report on the damage done by modern civilisation to the natural world by the IPBES (Intergovernmental Science-Policy Platform on Biodiversity and Ecosystem Services) at the UNESCO headquarters in Parise, May 6, 2019. REUTERS/Benoit Tessier/File Photo

(Reuters) – Yemen’s Houthi movement has detained two staff members of UNESCO and U.N. Human Rights since early November, the UN bodies said in a joint statement on Tuesday, calling for their immediate release.

The statement gave no details on the two individuals, but a Yemeni government official told Reuters they were Yemeni staff who had previously worked for the U.S. embassy in Sanaa.

“The U.N. has not received information about the grounds or legal basis for their detention, or their current status,” UNESCO Director General Audrey Azoulay and United Nations High Commissioner for Human Rights Michelle Bachelet said.

The United States said in November that the Houthis, the de facto authority in North Yemen, had detained several Yemeni employees at the U.S. embassy compound in the capital, Sanaa, without disclosing how many.

The embassy has been closed since 2015 after the Houthis ousted the internationally recognised government from Sanaa in late 2014. The mission has since operated out of Saudi Arabia.

The State Department has called on the movement to release immediately, unharmed, all Yemeni employees of the United States, vacate the embassy compound and return seized property.

Houthi officials have not commented on the detentions. The head of the group’s supreme revolutionary committee has criticised the United States for “abandoning” local staff.

The Iran-aligned Houthi movement has been battling a military coalition led by Saudi Arabia for more than six years.

(Reporting by Stephanie Nebehay in Geneva and Mohammed Ghobari in Aden; Writing by Ghaida Ghantous; Editing by Matthew Lewis)