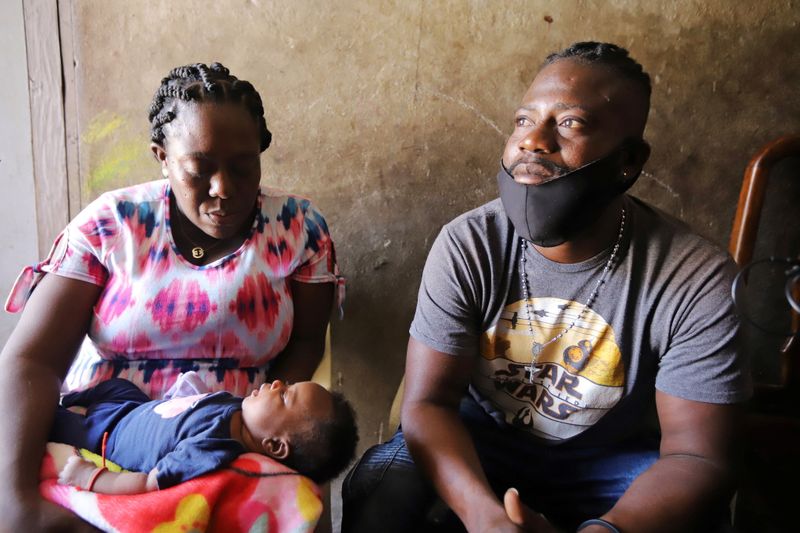 FILE PHOTO: Macdalla Renois holds her daughter Angelina as she and her husband Oberto Destinoble talk to Reuters after they were deported from Del Rio, Texas, by U.S. authorities, in Port-au-Prince, Haiti September 29, 2021. REUTERS/Ralph Tedy Erol

By Mica Rosenberg and Gessika Thomas

PORT-AU-PRINCE (Reuters) – Alie Sajous and Macdalla Renois both left Haiti years ago seeking a new life in South America, but struggled there. This summer, both decided to set out on a harrowing journey through a dozen countries to seek a new life in the United States.

Renois was heavily pregnant when she trekked for days through the jungle area between Colombia and Panama. After Sajous’ family crossed the same dangerous stretch, her toddler had to be hospitalized for several days.

Both women made it to the U.S.-Mexico border separately. In mid-September, they waded across the Rio Grande – Renois clutching her weeks-old infant who had been born on the way through Mexico – to join thousands of other mostly Haitian migrants in a makeshift camp under a bridge in Del Rio, Texas.

It was there, after days sleeping outside in the blazing heat, that their fates radically diverged.

U.S. immigration officials loaded Renois, 32, her husband Oberto Destinoble, 40, and their baby on a plane and sent them back to Haiti – a country suffering political crises, violence and natural disasters – even though they had not lived there for years.

Renois said she never had an opportunity to tell border agents she feared being returned to Haiti, which effectively denied her the right to seek asylum under U.S. and international law. On the flight back to Haiti, she said her hands and feet were cuffed and connected to a chain around her waist, like all the adults on the plane, making it difficult to hold her daughter.

“I didn’t steal anything, I am not a criminal. It is the first time in my life I was shackled that way,” she said.

Around the same time, U.S. immigration officials released Sajous and her husband and daughter to join relatives in Florida, allowing her a chance to settle in the United States if she wins a case in immigration court. However, she noted that no U.S. official actually asked her if she wanted asylum or if she feared returning to Haiti.

“They never asked me anything,” she said.

The women are among more than a dozen migrants interviewed by Reuters who said they were given no explanation as to why they were either returned to Haiti or allowed to stay in the United States as U.S. authorities broke up the migrant camp last month.

A U.S. Department of Homeland Security (DHS) spokesman said at the end of last month that some migrants have been allowed to stay in the United States because of “acute vulnerability” or “if operational capacity requires it.” The DHS did not respond to a request for comment on individual cases or provide further reasoning behind their decision making about the expulsions.

The vastly different experiences of the two Haitian families owes a lot to a policy put in place by former President Donald Trump at the border which makes it easier for border agents to quickly expel migrants without giving them a chance to ask for asylum.

Known as Title 42, the policy was ostensibly aimed at preventing the spread of coronavirus, but migrant advocates say it became a convenient way for Trump to cut the number of asylum seekers, and President Joe Biden has mostly continued its use since coming to office in January.

Haitian migrants interviewed by Reuters reported inconsistent testing for COVID-19 at the border, with some who were expelled saying they were not tested in the United States at all. A spokesperson for U.S. Customs and Border Protection said anyone who exhibits signs of illness in custody is referred to local health systems for appropriate testing, diagnosis and treatment.

The fate of the two women, meted out without explanation, mirror that of thousands of others.

As of Sept. 27, 10,000 Haitians had been allowed into the United States to pursue their immigration cases in court, while 3,000 others were in immigration detention.

In addition to the Haitians, hundreds of thousands of mostly Central American migrants have been expelled to Mexico since the inception of the Title 42 policy in March 2020, while Biden exempted unaccompanied minors and has been releasing some Central American families into the United States as well.

(A graphic on migrant camps: https://graphics.reuters.com/USA-IMMIGRATION/MEXICO/mopankddwva/index.html)

Although one would end up in relative safety in Florida and the other sent to Haiti in shackles, the two women had similarly traumatic journeys to the United States.

Renois gave birth to her baby in August in a hospital near Mexico’s border with Guatemala. Still bleeding from her C-section, the new family took a three-day bus ride to the Rio Grande across from Del Rio, Texas. There, with Renois clutching her husband Destinoble with one hand and Angelina with the other, they waded into the United States.

Neither knew how to swim and in one terrifying moment, Renois tripped, fell to her knees and briefly lost hold of her baby in the water.

“That was the worst moment of my life,” she said.

Destinoble was on the banks of the Rio Grande on the day last month when U.S. Border Patrol officers on horseback charged toward Haitian migrants. The incident, captured in photos and on video, went viral and Biden called it “horrible” and “outrageous.”

A former mechanic and security guard, Destinoble said he fled Haiti in 2019 after a gang member tried to recruit him.

He moved to Chile and found work in fruit fields and Renois soon followed, but had trouble finding a job. The couple borrowed from relatives and saved up the $10,000 it would cost to head north.

Both said they never expected to be expelled to Haiti but are now trying to get a Mexican passport for Angelina who has a Mexican birth certificate. Once they get that, they plan to leave again, they said, in the hopes of making a life in Mexico.

Sajous, 29, said she left Haiti in 2015 after she escaped an attempted kidnapping. Her mother spent around $4,000 for her to go to Chile where she entered on a tourist visa. Knowing no one, she struggled to find work and suffered stints of homelessness until she met her husband Marcus who had a job in construction.

By this summer, the couple had saved the $11,000 they needed for their journey to the United States. They and their two-year-old daughter Zarah traveled by bus and plane through Bolivia, Peru, Ecuador and Colombia where they walked through the Darien Gap jungle area to Panama for eight days, often going without food, she said.

Zarah came down with a bacterial infection and spent 3 days in a hospital in Costa Rica. They then made their way up through Central America and got stuck in southern Mexico for a month.

The family arrived at the U.S.-Mexico border and slept on the ground under the bridge for several days until they were transferred to a Border Patrol facility.

One day they were told they were being released. Her cousin in Florida bought the family plane tickets and they were told to check in with U.S. immigration authorities, given a GPS-linked cell phone and told they could not travel too far from their house.

Without a lawyer to help them pursue an asylum application or work permits, navigating the backlogged U.S. immigration court system is an intimidating process.

If a migrant has been found to be “firmly resettled” in another country before arriving in the United States, in many cases they might not be eligible for U.S. protection. Proving a case in immigration court can be difficult and take months, if not years.

“I am worried about what will happen now,” Sajous said.